“There is no silver bullet!”

That’s how Trustee Fran Murphy described the challenge facing Cold Spring as recycling costs continue to escalate. At the June 11 meeting of the Village Board, Murphy reported that between January 2018 and April 2019 the cost to the village of disposing of recyclables rose from $36.66 to $84.93 per ton because of changes in the larger industry such as a reluctance by China to take American cardboard and other material. 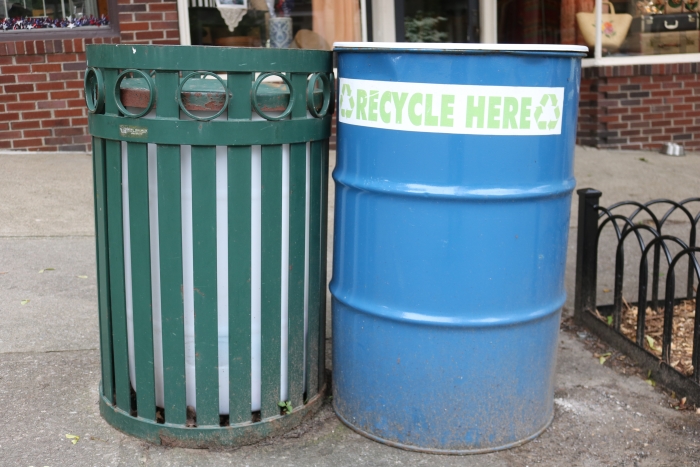 Cold Spring employs “single stream” recycling with once-a-week curbside pickup that co-mingles all recyclables. Murphy said a switch to dual-stream recycling, which the Village once used, would require residents to separate fiber products such as paper and cardboard from glass, plastic and aluminum cans, could mean annual savings close to $9,000.

Murphy said one option could be alternating weekly pickup — paper and cardboard one week, cans and bottles the next. Residents would store each stream’s materials for two weeks at a time.

Murphy said any changes in recycling would probably not take place until 2020 and that grant money is available for public education. “There is a lot of educating to be done,” she said.

■ Cold Spring will soon have a new superintendent of water and wastewater. Trustees appointed Matthew Kroog, who lives in Fishkill, to the job, which pays $90,000 annually. He will begin on June 24, succeeding Greg Phillips, who plans to retire next month after helping to train Kroog. Mayor Dave Merandy said Kroog will “fill some big shoes” in replacing Phillips, who is retiring after 25 years as superintendent. Merandy said he had concerns about finding a qualified candidate but was “comfortable and really happy” with Kroog, who is licensed to operate both water and wastewater systems.

■ Officer-in-Charge Larry Burke reported the Cold Spring Police Department responded to 76 calls for service in May and issued 76 parking and 31 traffic tickets, including eight for speeding. One arrest was made for driving without a license. Burke also reported an uptick in minor traffic accidents in the village, which he said is typical as summer approaches.

■ Merandy said he had received a letter from the state Department of Transportation indicating that the agency will investigate the installation of a traffic light near the Butterflied redevelopment project. Seniors living at Chestnut Ridge had requested village support for a light. The letter cautioned that the review could take a while.

■ After a lengthy and often confusing discussion, the board agreed on June 4 that nonprofit groups using Mayor’s Park for ticketed events will pay $500 per day, which is 50 percent less than for-profit organizations. The Cold Spring Recreation Commission earlier had recommended that nonprofits be charged $250 a day, but Merandy commented, “That’s way too low.”

■ A resolution opposing the build out of the Danskammer power plant near Newburgh was tabled due to the absence of Trustee Steve Voloto, who has been a vocal critic of the proposed expansion of the facility.

■ Trustees approved renting a portion of the highway department yard to organizers of Hops on the Hudson for one day for $350. The yard will be used for vendor parking at the June 29 craft-beer festival at Mayor’s Park.

■ The board reduced the fee to organizers of Ascend Festival for use of Dockside Park from $1,950 to $1,200, a move trustees stressed was a one-time accommodation.

■ The portion of Church Street adjacent to the firehouse will be closed on Friday, July 26, from 4 p.m. to 9 p.m. for the Junior Fire Academy graduation. Residents will still be able to access Church Street via Northern Avenue.

■ Trustees approved a recommendation from the Planning Board to grant waivers for four parking spots at 15 Main St.

■ The board waived the 30-day advance notice normally required for renewal of Riverview Restaurant’s liquor license and a first-time license for the new owners of Angelina’s Restaurant.

■ At the May 29 meeting, Juhee Lee-Hartford of River Architects addressed the board regarding plans to convert the building at 15 Main St. to a cafe and one-room tourist home. The owner asked to purchase a piece of village-owned land which runs the full width of the property between the building and the sidewalk. Trustees balked at selling the entire property and later agreed to sell 59 square feet.

■ A request from Butterfield Realty for the removal of a streetlight near the entrance to the Butterfield redevelopment was tabled, pending a site visit by trustees.

■ Early requested that fellow trustees review various chapters of the zoning code for “clarity and consistency” and to assess recommended changes as part of the ongoing code update. Some antiquated sections, she said, may no longer be needed.