According to the most recent statistics compiled by the Dramatists Guild, about 40 percent of its members are women. And over the last 20 years, they have outpaced men in joining the organization by more than a 3-to-1 margin.

Yet plays by women account for only 29 percent of the works produced by regional theaters each year, the guild says.

Those type of numbers prompted community theater producers Gabrielle Fox and Robin Anne Joseph to organize Glass Ceiling Breakers, a program of seven plays, all written by women, that will have a three-performance run at the Philipstown Depot Theatre on Garrison’s Landing from June 21 to 23. 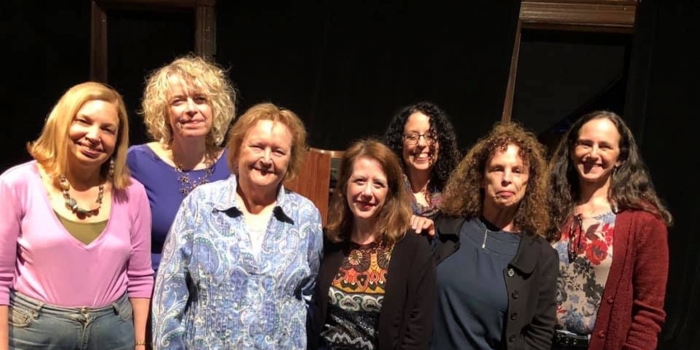 Fox says it was two years ago, while she was involved with the Axial Theater in Pleasantville, that she realized there weren’t any women’s playwriting festivals in the Lower Hudson Valley. So she pulled together a festival at the Axial with the work of seven female playwrights to mark Women’s History Month.

Logistical hurdles prevented a second year for the event at the Axial, so Fox approached the Depot Theatre, where Joseph’s GoJo Clan Productions has staged productions such as last year’s Doubt. (Fox’s arts company is Theatre Revolution.)

Joseph says she and Fox “are on a mission of sorts. We would like to do more to give women a voice and a platform to hear that voice.”

They solicited submissions from women playwrights, including students whom Fox teaches through an adult education program administered by Westchester Community College. “We got quite a few entries,” she says, “more than we can include this year.” The only criteria for submissions, besides being written by a female, was that the play could not be longer than 15 minutes.

Fox says the submissions included works in many genres, from comedy to drama. “We were looking for quality, overall, beyond balancing out genres,” she says. “When you feature all women playwrights, you get a different voice. You realize that all the plays you studied through the years in English classes were written largely by male playwrights. There were myths around women writers, even five or 10 years ago — one artistic director said to one of our playwrights that if they saw a woman’s name on the title page, they’d put it aside. We do so much more than people expect.”

“After the Ball,” by Robin Anne Joseph
When Prince Charming catches up with Cinderella after the ball with her missing shoe, she rejects it and denies that she is the woman he is looking for.

“The Reveal,” by Linda Bidwell Delaney
Two strangers are tasked with creating portraits of each other — one with paint and one with words. Will their portraits show the “real” them?

“Light,” by Barbara Blatner
During the darkest time of the year, a mother and her two adult children try to find the little light that is left in their relationships.

“Yes,” by Evelyn Mertens
At their high school reunion, two female ex-lovers hash out who is at fault for the break-up and if they can ever have a future.

“Suicide by Wife,” by Susan Jennifer Polese
An officer responding to a domestic violence call tries to explain to the victim how to get free of her abuser, while the victim shows the officer how we are all more trapped than we think.

“Coney Island,” by Laura Toffler-Corrie
When a therapist’s new client turns the tables on her, will there finally be healing?

“Winfluence,” by Gabrielle Fox
Two co-workers engage in a heated competition when one’s self-help tactics leave them both vying for the same promotion.

The submissions this year do not include any younger writers, although Fox notes that “most of the plays written by women being produced are by young women, yet there’s something to be said for writers who have lived.”

She is eager to introduce the form to her students. “There are so few playwriting classes for young people,” she says. “It’s all acting classes. Playwriting is so different from any other kind of fiction — it’s live and in the moment.”

Each playwright was asked to provide a director and cast. Two are directing their own plays, though none are acting in them. Fox hopes the Garrison location will draw a new audience, as well as people who attended in Pleasantville.

Although there were a number of women represented at last week’s Tony Awards, a more typical scenario, Fox says, is the production of Tootsie, where the non-performance nominees were all men “and the star is a man playing a woman. I hope audiences start noticing these things.”

Tickets for each performance, which are scheduled for Friday and Saturday at 8 p.m. and Sunday at 3 p.m., are $25, or $20 for seniors and students. See brownpapertickets.com.