When you have kids, time moves fast. My neighbor-mom-friend and I were sitting together on Thursday evening at an elementary school spring concert — the first of many spring events that happen toward the end of school — and we were discussing when my daughter’s birthday party would happen. Yes, we were discussing this during the concert, in whispers, because that’s the only time we can plan such things. We’d already been to a haircut, soccer practice, dinner/snacks, and now here we were in the hushed darkness of the Pete and Toshi Seeger Theater at Beacon High School while the children sang.

Moving party-planning possibilities around like a game of Tetris, we eventually got lost. “The party could be Saturday, but my hubby is out of town then. It could be the following, but that’s the five-day Memorial Day weekend and I think we’re also having the Welcome Spring Backyard Party that Saturday. And then the following weekend, we drive to Virginia for a wedding. Oh dear, it has to be this Friday! Wait — what day is today? Is today Friday? Is the party tomorrow?”

You can imagine this is where we broke down and gave up. The birthday party become a text-invite slime slumber party the Friday of the super long holiday while the Welcome Spring Backyard Party never happened. We did make it to Virginia, road-trip style, which was lovely but involved tortured nights because our almost-2-year-old was fascinated by hotel rooms and couldn’t bear to sleep in one.

During our planning, my neighbor brought up time. “Is time moving faster, do you think?” When she asked me — in May — I had already suspected that time had been moving faster. Just like the movie Spy Kids, when the Time Master speeds up time, this what I have been suspecting since January. People of all ages, kids or no kids, have all been so surprised at how fast April went, then May, and now June, with pools opening. 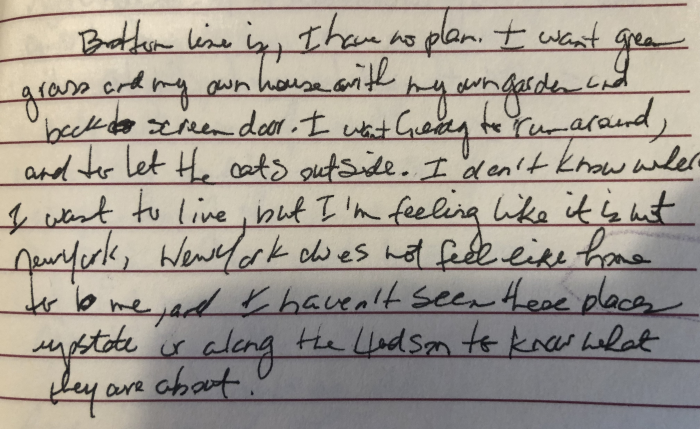 From the author’s journal, circa 2006

As it happens, Wired reported this month that quantum leaps can be controlled, and they aren’t instant as once suspected but gradual (although super fast gradual). I don’t know what that means, but it confirmed (by my own estimation) what I thought about time speeding up or returning to normal. Normal. Is there a normal?

I discussed this with a second-time new mother at the park at Sargent Elementary who was expertly cooing her newborn into calmness. She had been studying quantum mechanics as it related to childhood education for an academic paper she was writing. She didn’t dismiss my theory, at least, and told me about astronauts who experience time-adjustment when they return to Earth.

But here’s where the actual quantum leap happens — as it relates to the photo above: I was cleaning last month and discovered this passage I’d written in a journal started in 2006. I was living in New York City as a new adult (had finished college, had a couple of jobs, lived in my own apartment). I was at a turning point. A turning point to where? I didn’t know. Here’s the passage in case you can’t read cursive (my sister rejects cursive, but it does hide misspellings nicely):

“Bottom line is, I have no plan. I want green grass and my own house with my own garden and back screen door. I want Gerdy to run around, and to let the cats outside. I don’t know where I want to live, but I’m feeling like it is not New York [City]. New York does not feel like home to me, and I haven’t seen these places upstate or along the Hudson to know what they are about.”

And then it hit me — the quantum leap feeling — that I was living my dream. Right now. Standing in our sunroom in “a place along the Hudson” that I knew nothing about — which became Beacon! My cat goes in and out every day, my dog used to enjoy the sunshine in the grass, and my other cat is buried in the backyard! LOL. The only thing missing is a back screen door, which I’m working on replacing (I can’t figure out how to get the metal storm door off).

Bottom line is — in these moments that go so fast — we can lose our lives or forget about our visions. Journals are good evidence of what we wanted. Social media streams are digital and disappear. Connect to your thoughts. Put pen to paper. Let the moments spill out of your head onto a place you can look back to, and pat yourself on the back for accomplishing all or part of it. Because in one blink, you’re moving on to the next dream. And you need time to dream.