The developers of the West End Lofts, the below-market-rate housing complex being built next to Beacon City Hall, must begin work on a “do-over” after the Planning Board flagged one of the development’s three buildings for not matching renderings that were submitted two years ago.

According to drawings given to the Planning Board in 2017, the brick façade around Building No. 1’s windows would extend several inches out from the building, but as constructed, the “articulated” detail is flush with the windows. 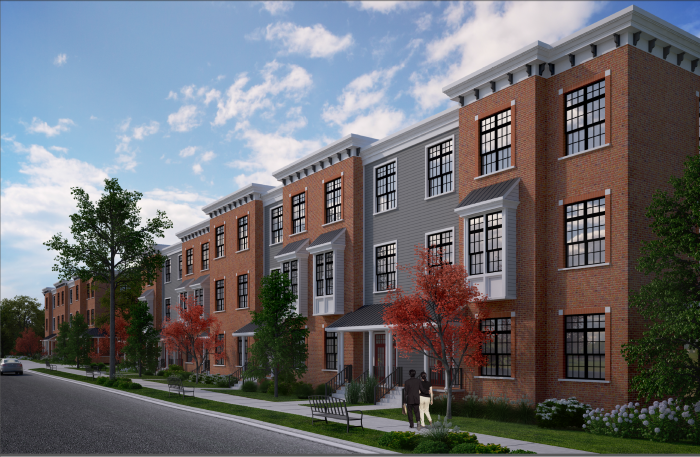 The work to correct the detail isn’t expected to set completion of the project back significantly, developer Ken Kearney said this week. Its first building, with 28 apartments, should be completed in August or September, he said. The second building, with 45 units, should follow two months later.

Together, the buildings will feature affordable artists’ spaces (starting at $715 per month for a one-bedroom and $855 for a two-bedroom) and middle-income units (starting at $1,099 for a one-bedroom and at $1,315 for a two-bedroom). A third building at the site will include 25 market-rate apartments. The window detail is only an issue with Building No. 1, Kearney said.

The miscue happened after West End officials submitted renderings to the city that were not meant to be precise technical drawings, Sean Kearney, Ken Kearney’s son, told the Planning Board on June 11. “We have our architectural plans and that’s what we build by,” he said. “The rendering represented something that we never picked up on during the architectural review process.”

But board Chair John Gunn was clearly not happy with the mistake.

“If you weren’t going to build it, you shouldn’t have represented it that way,” he said. “You’re putting us in a challenging position. Let’s get it right. The responsibility is with the applicant. You should not put it on us to find these discrepancies.”

Sean Kearney said the company will fix the windows so they more closely correspond with the drawings. The company could also return to the Planning Board and apply for an amended architectural plan.

The Beacon school board approved a measure on Monday (June 17) to move forward in appraising two parcels owned by the district — the 21-acre parcel beneath Dutchess Stadium and a vacant 21-acre parcel north of the stadium.

The district must decide whether to enter into a long-term lease with the county or sell it the stadium land. The two sides agreed to a short-term extension of their existing lease late last year.

School board members added a clause to the agreement before voting Monday night to have the “north 21” acres appraised independently, in case they decide to lease or sell that land separately.

While the school district decides what to do with its parcels, the county is also negotiating with the Hudson Valley Renegades, the minor league baseball team that has played at Dutchess Stadium since it opened in 1994, for a new long-term rental agreement.

The school board also voted on Monday to extend Superintendent Matt Landahl’s contract for three years, through June 30, 2022. He was hired in 2017 to succeed Ann Marie Quartironi, who had been acting as interim superintendent since the resignation of Barbara Walkley in January 2016.

Landahl, who was the district’s 10th superintendent in as many years when he was hired, will earn $197,676 annually.