On June 14, Gov. Andrew Cuomo made New York the fifth state to ban religious objections by parents to prevent the vaccination of their children. The change will affect about 70 students in the Highlands who will not be able to enroll in the fall unless they are vaccinated or obtain medical exemptions.

New York State requires students in day care or nursery school through grade 12 to be vaccinated against diphtheria, hepatitis B, measles, mumps, pertussis, polio, tetanus and varicella (chickenpox), unless the school issues an exemption, which is now limited to medical reasons. New York did not recognize philosophical or personal opposition to vaccines, as many states do.

To obtain a medical exemption, a parent or guardian must provide a school with a certification from a physician that a specific immunization would be detrimental to the child’s health, such as when the child had a severe allergic reaction to a previous vaccination.

“This was a common-sense health bill,” said Jacobson in a statement on June 17. “There is no greater priority and compelling state interest than protecting the public health. Science proves that vaccinations save lives, and I will always put New Yorkers’ safety and well-being first.”

Opponents of the law argued that it restricts parental choice to make health decisions for their children. But the Senate and Assembly bills were buoyed by the recent re-emergence of measles — a disease declared eradicated in the U.S. in 2000 — in areas with relatively low vaccination rates.

On June 13, the federal Centers for Disease Control and Prevention reported 1,044 cases had been confirmed since Jan. 1 in 28 states, including New York, the greatest number reported in the U.S. since 1992. Two of five outbreaks being tracked by the CDC are in New York, with 266 cases in Rockland County and 596 in Brooklyn.

Infants who are not old enough to be vaccinated and people with suppressed immune systems are especially vulnerable to contracting the disease, according to the CDC. The number of people who need to be vaccinated to prevent outbreaks is thought to be 93 percent to 95 percent. 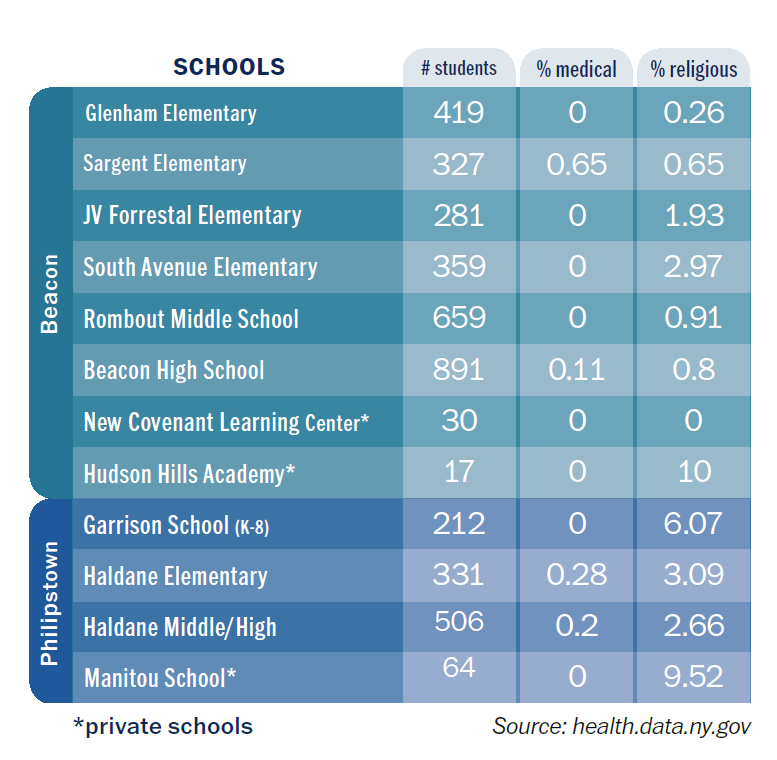 About 95 percent of students in New York State are completely immunized, according to the state health department. In the Highlands, the figures range from a low of about 90 percent at two private schools to 98.7 at Glenham Elementary in the Beacon school district, according to data from the 2017-18 school year.

Based on Beacon schools’ reports, about seven students at the high school received religious exemptions last year, six at Rombout Middle School, one at Glenham, two at Sargent Elementary, five at Forrestal, 10 at South Avenue, and two at the private Hudson Hills Academy.

In Philipstown, about 13 students received religious exemptions at the Garrison School, six at the private Manitou School, 10 at Haldane Elementary and 13 at Haldane middle and high schools.

Cuomo also signed into law on June 14 a law that will strengthen protections for tenants in rent-controlled apartments and allow local governments outside the New York City area to create their own rent-control programs for certain buildings.

The Housing Stability and Tenant Protection Act passed the Senate, 36-26 (Serino voted no), and the Assembly 95-46 (Galef voted no, and Jacobson voted yes).

Among its provisions, the new law:

Real-estate developers in New York City, which has nearly a million rent-controlled apartments, fought the measure and appealed to Cuomo to veto it.

Serino did not immediately respond to a request for an explanation of her vote, but Galef said she voted “no” because she is concerned that “landlords will allow buildings to go into disrepair given the very limited ability to recoup repairs through rents. Also, there is [now] no limit on the income for those under rent control, possibly denying those who need affordable housing and allowing those with wealth to be subsidized.

“Another issue is that the legislation is applied automatically statewide to all rental properties under six units,” she said. “We have never covered these properties before and I am concerned that if a tenant is not paying rent or has other issues that the new protections will mean months of no rental income on these small units [for landlords], which may be hard to absorb.”

On Monday (June 17), Cuomo signed legislature soon after it was passed by the Assembly and Senate that allows undocumented immigrants to obtain driver’s licenses.

The Driver’s License Access and Privacy Act passed in the Senate, 33-29 (Serino voted no), and in the Assembly, 86-47 (Galef and Jacobson each voted yes).

Supporters of the “Green Light” law estimated it will make 250,000 people eligible for licenses as long as they pass road tests, obtain insurance and have their vehicles inspected annually.

Before signing the bill, Cuomo sought assurances from the state attorney general that federal officials would not have easy access to the license data, which can only be released under a court order and if the license holder is notified. The licenses cannot be used as federal identification or to vote.

In a statement issued June 18, Serino said: “The county clerks charged with administering these licenses have made it clear to me that they do not have the resources necessary to effectively verify identities using foreign documents as they would be required to do…. The system being created under this legislation is ripe for abuse and may inadvertently leave New Yorkers vulnerable to serious security and public safety threats.”

A bill that passed 60-0 in the Senate and 141-0 in the Assembly before being signed into law by the governor removed “gravity knives” as a dangerous weapon from the criminal code. It is defined as a knife with a blade that is released from a handle or sheath by the force of gravity, distinct from a switchblade, which remains illegal.

The knives have been banned since 1958 but lawmakers said prosecutions of tradespeople who use the knives or people who weren’t aware that pocket knives were illegal clogged the court system. The legislation noted that between 2003 and 2013, more than 60,000 people in the state were arrested for possession of the knives. Cuomo vetoed a previous version of the bill in 2017, saying it would have legalized all folding knives.

On May 14, the governor signed into law the Domestic Violence Survivors Justice Act, which gives judges more discretion when sentencing defendants who were victims of physical, sexual or psychological abuse by someone in the same household and committed crimes related to the abuse.

Judges would be able to hand down reduced sentences, including probation, if they determined “the defendant was a victim of domestic violence at the time of the offense and the abuse was a significant contributing factor in the commission of the offense.” For example, the suspect could make the case that the crime was committed due to coercion by an abuser or that it was made to counter the abuse. People already imprisoned will be allowed to appeal to be re-sentenced.

The bill passed the Senate 54-7 (Serino voted yes) and the Assembly 103-40 (Galef and Jacobson each voted yes).

2 thoughts on “How They Voted on Vaccinations, Rent Control”