The Nelsonville Village Board on Monday (June 17) informally launched efforts to address the community’s lack of sewers and find a solution acceptable to all – including Cold Spring and some of the Nelsonville residents who sued both villages.

The issue arose at the newly reconstituted board’s formal June meeting, on former Trustee Michael Bowman’s fifth day as interim mayor. On June 12, the board appointed him to fill the vacancy created by the unexpected departure of Chris Caccamise, who had been elected in March.

With about 500 residents, Nelsonville relies largely on backyard septic systems, or, in some instances, cesspools that channel sewage into underground pits. A scattering of properties near the Cold Spring-Nelsonville border — including Bowman’s home — connect to the Cold Spring sewer system.

With a population of about 2,000, Cold Spring operates a sewage treatment plant capable of accommodating its smaller neighbor, which already utilizes the separate Cold Spring water system. 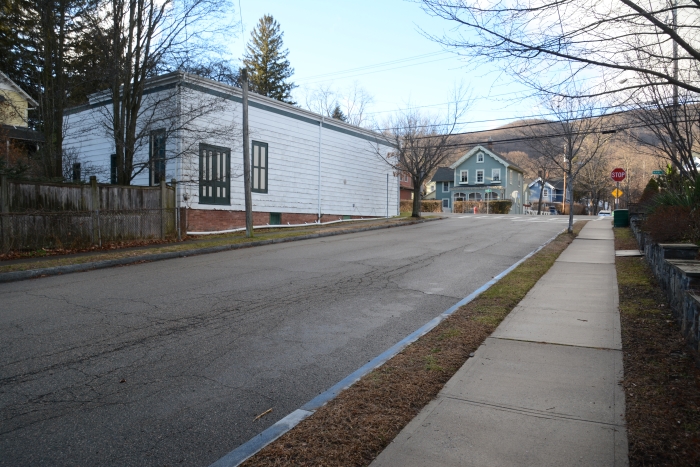 A block of Pearl Street in Nelsonville, looking toward Main. (File photo by L.S. Armstrong)

On Monday, one of them, Gary Gunther, addressed the board, declaring that the lack of sewers in Nelsonville is “a ticking time bomb” and that environmental laws are likely to compel the village to act.

“The rules aren’t getting simpler,” he observed, noting that “there’s money out there” to help communities like Nelsonville. “It just has to be tapped.”

Gunther asserted the Pearl Street residents had only sued the villages “as a last resort. It’s disheartening that Nelsonville, rather than help us” sided with Cold Spring and that the two villages “treated us like trash. While a community-wide [sewer] system should be the end goal, it doesn’t solve our immediate concerns” on Pearl Street, he said. “This village needs to engage Cold Spring.”

Bowman promised to confer with Cold Spring officials. Installing sewers could cost $7 million to $10 million, but not having them could lead to serious health problems going forward, he said. “We’re trying not to kick the can down the road any farther,” he said.

Also on Monday, the board voted unanimously not to fund a land survey of the Secor Street parcel that has been proposed as an addition to an existing conservation easement maintained by the Open Space Institute (OSI). Trustee Lisa Mechaley reported that the cost of the survey was an estimated $25,000, more than three times the expected amount.

“OSI should pay” for it, Bowman said. “We don’t have the money.”