For the first time, a beer-lover’s nirvana, Hops of the Hudson, will bring 45 breweries and cideries to Cold Spring’s Mayor’s Park on Saturday, June 29.

More than 90 taps will be pulled at the craft beer and food festival, which is being organized by Cold Spring resident John Scherer and his family. He hopes it will be the first of many similar annual events.

“We are putting this festival on because of a love of craft beer and the Hudson Valley, and some of the breweries have probably come about for the same reason,” Scherer says. “It’s an opportunity to go from having a hobby to turning it into a small business and then, hopefully, having the ability to employ people in the area.”

Many of the breweries at the festival are located in the Hudson Valley, although four of five New York City boroughs also will be represented (Manhattan is the odd man out — it only has one brewery, according to Scherer). Other brewers will travel from as far away as Syracuse and Saratoga Springs. 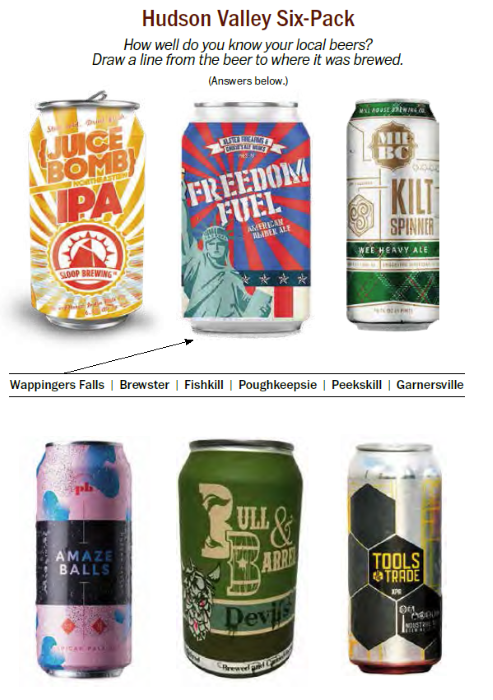 Scherer says he and family members spent months traveling to “70 or 80 breweries, meeting the people who run them. Luckily most had the ability to come to our event, although some are just two-person operations where they have to stay put and pour beers.”

There will also be 10 food trucks, he said, including from the Cold Spring Pantry and Round Up Texas BBQ in Philipstown, as well as Octavio’s Food Wagon, which often parks at Annsville Circle.

The festival will have music from Kat Selman, the John James Band, Kathleen Galgano and a brewer, Evan Watson of Plan Bee Farm Brewery. Other entertainment will include foosball tables, blindfolded basketball shooting, bocce ball, a cigar tent, corn holes and hatchet throwing. There will also be 14 tables set up with markers and other drawing tools, for people to get creative, he says.

Tickets: Tickets are $64 and include three hours of unlimited tasting, from 2 to 5 p.m., a sampling glass and a meal ticket. VIP tickets are $84 and allow entry at 1 p.m. Designated driver tickets are $18. See hopsonthehudson.com. Identification will be checked at the gate and only those ages 21 or older will be admitted.

What you should know: The festival will take place rain or shine; two tents will be available should there be a downpour. Lawn chairs and blankets are welcome, but dogs (except for service animals) are not allowed. Mayor’s Park, at 105 Fair St., is a short walk from the Metro-North train station, where parking is free on weekends.