Putnam discusses adding its own $100 ticket

“We’ve had a lot of unsafe situations where residents are driving past stopped school buses that have lights flashing,” said Legislator Paul Jonke (R-Southeast) during the county’s June 19 Protective Services Committee meeting.

In Brewster, bus driver Elke Reimann was credited with saving the lives of three students on Route 22 in October when a driver ignored the bus’ stop sign and passed on its right side where students exit the bus. Reimann was able to stop the children before they stepped into the path of the car, which left the scene. 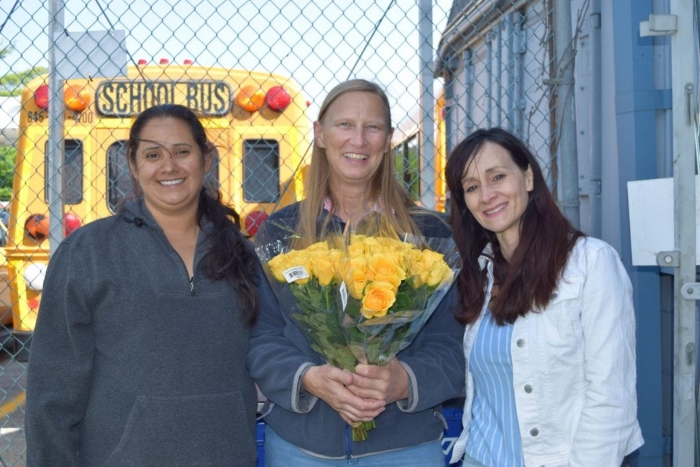 Elke Reimann (center), a bus driver for the past 18 years, received roses and thanks from Mayra Leiva and Kim Parrottino of Brewster for saving their children’s lives. (Brewster Schools)

Legislation before the state Senate and Assembly would allow school districts to attach a camera to the swinging stop sign on the side of the bus; the camera would activate if a driver illegally passed and would capture the vehicle’s license plate.

A provision in state law allows municipalities to add their own fee to this violation, said Dina Marie DiBlasi, a senior deputy county attorney. For example, Nassau County on Long Island imposes a $55 public safety fee for passing a stopped school bus that is separate from the standard fine.

Jonke suggested Putnam make its fine $100. Legislator Neal Sullivan (R-Mahopac), who is a member of the Putnam County Traffic Safety Board, suggested the fee be even higher.

“This has been an ongoing issue at the Traffic Safety Board — people passing school buses,” he said.

Legislative Counsel Robert Firriolo noted the state proposal treats a ticket for passing a stopped school bus the same as it does a speeding violation issued via video surveillance, meaning the ticket goes to the person to whom the car is registered.

Following the discussion, the three committee members approved a resolution to create the $100 fine and sent it to the full Legislature for consideration.