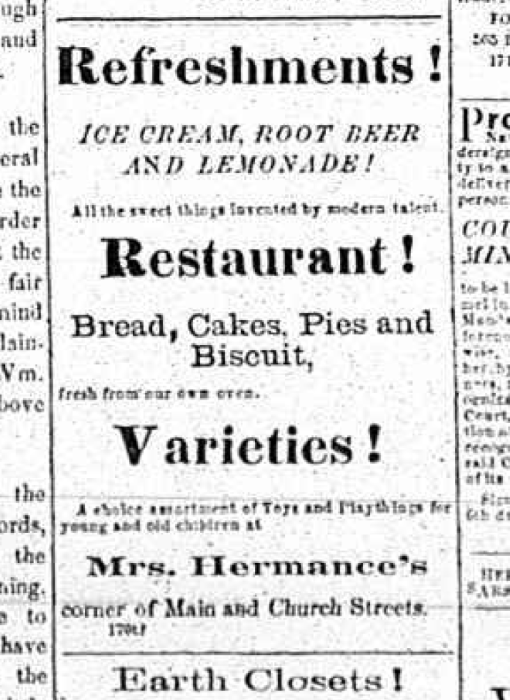 Mrs. Hermance, whose restaurant was at the corner of Main and Church streets, opened a bakery inside. The Cold Spring Recorder encouraged “those who wish to encourage deserving females in their struggle for an honest livelihood” to patronize the shop “in preference to men who are able to work, and for whom a thousand avenues to business are open from which women are barred by the customs of society.”

The state Legislature passed a law making public intoxication a crime, and arrests were soon made in Cold Spring, including of a stranger named Patrick Flanagan, who roamed the streets for more than an hour with an accordion he was too drunk to play.

Isaac Davenport sued William Bloomer for trespassing after he was caught fishing in Penny’s Pond, but the prosecution withdrew the case after no fewer than five people — Davenport, Bloomer and Samuel, David and Charles Hustis — claimed ownership of the pond.

A team of horses pulling a carriage at West Point with three men aboard took fright and ran down the hill and straight into the Hudson.

In Cold Spring, a wagon driven by a drunken driver nearly hit Stephen Pierce as he stood in front of the market.

The village instructed Officer McCaffrey to enforce the ordinance prohibiting the obstruction of sidewalks.

A tally-ho party of the New York Coaching Club passed through Garrison and Nelsonville en route to Shelbourne, Vermont, a distance of 318 miles, hoping to break the speed record. The relay stations were set 10 miles apart and 120 horses were used; they were shipped ahead by rail.

A new guidepost was erected at the fork of the road from Garrison nearly opposite the Plum Bush farm cottage and the junction of the cemetery grounds addition. One hand and finger point toward Chestnut Street and said in white letters “Cold Spring” and the other point toward Nelsonville and said “Nelsonville” and “Fishkill.”

A passerby noticed the lamp in a glass case used as an ice cream sign in front of Mrs. William Bailey’s on Main and Orchard was ablaze and knocked it out of its fastening, badly burning his hand.

A barrel of oil exploded at West Point, causing a fire that burned for two hours and “lit up the heavens for miles around,” according to the Recorder.

Edward Thornton, 67, who for 30 years was the superintendent on the estate of Samuel Sloan, died. The native of Gallowayshire, Scotland, was remembered for raising the money for the Catholic church of Garrison and purchasing the land on which it stands.

The Recorder noted that many readers had no doubt tasted baked ice cream, where ice cream encased in meringue was placed in the oven long enough to harden the meringue but not melt the ice cream. But it reported a Philadelphia firm was making fried ice cream, which was a solid cake of ice cream covered with a thin layer of pie crust and dipped in boiling lard or butter.

The superintendent of the gardens at Cragside grew a strawberry about six times the size of an ordinary berry.

Mr. and Mrs. James Ladue welcomed a daughter, the first girl born in the Ladue family in three generations.

The Red Cross hosted a dinner for about 60 soldiers from Philipstown who returned from World War I. It included a short speech by Maj. Hamilton Fish, who noted that the doughboys changed the equation in the war from how long the French and English could hold out against the German forces to how long it would take for victory.

Dr. Clark opened a clinic for children on Fair Street and in a single morning removed the tonsils of four children. The operations, which cost $15 each, were paid for with donations to a local hospital fund. 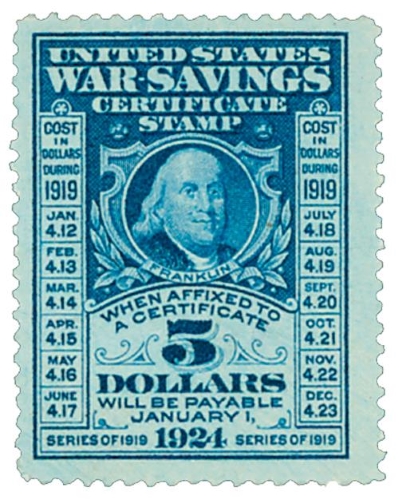 The Garrison Union Free School held graduation for its five eighth-graders. War Saving Stamps were presented by Mrs. William Church Osborn to students in each grade for achievements in arithmetic, English, spelling and penmanship.

Her husband, William Church Osborn, a member of the Community Development Society of New York City, purchased the 560-acre Cutler farm in Dover Plains for $35,000 as a place for the care of the wounded members of the 77th Division.

The Red Cross held a salvage sale of the sheets, pillow-cases, towels, pillows and kitchen utensils used in the emergency hospital during the influenza epidemic.

Dr. George Morris, the physician at Surprise Lake Camp in Philipstown, reported the sighting there of a rare white robin. 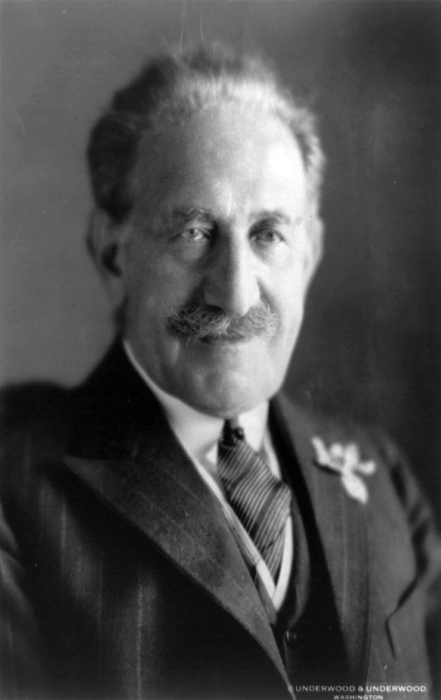 The Baptist Church presented an encore of the rural comedy, Cranberry Corners, at Town Hall to raise money to purchase an organ.

The body of Horace Hunting, 32, who had escaped from Brown’s Physical Training School in Garrison a month earlier, was found in the woods, where he had hanged himself, a half mile from the school. A civil engineer from Washington, D.C., he was sent to the school to “recuperate from nervous troubles,” according to a news account.

Six students graduated from Haldane High School during its 25th annual commencement, the largest class since 1910.

The parents of Mike Phillips, 15, who disappeared from his home on Rock Street in Cold Spring, asked for any information about his whereabouts.

Kathleen Farrell received a telegram notifying her that her brother, Sgt. William Russell Farrell, 24, of Cold Spring, had been killed in action on May 16 at the Anzio Beachhead on the western coast of Italy. He was the third Philipstown man to lose his life in the war.

Mr. and Mrs. Joseph Etta, of Parsonage Street, received a telegram notifying them that their son, Staff Sgt. Anthony Etta, had been missing in action in Italy since May 12. Another of their sons, Sgt. Joseph Etta, was also probably in Italy.

Dr. L.M. Stevenson, president of the Haldane Board of Education, announced he would not run for another term, after 11 years on the board. He was the last of the original trustees elected in 1933 when the central school district was formed.

John Zuvic and Allison Gent won the Philipstown Jaycees Safe Driving Auto Road-e-o, which involved a written exam and an obstacle course. Zuvic went on to place third at the state championships.

The Philipstown Town Board created a five-member Youth Recreation Commission.

The inaugural Proud to be an American Day was held at the Cold Spring waterfront.

More than 1,200 people attended a performance of the three-ring King Brothers Circus on Fair Street. The event was a fundraiser for the Jaycees. 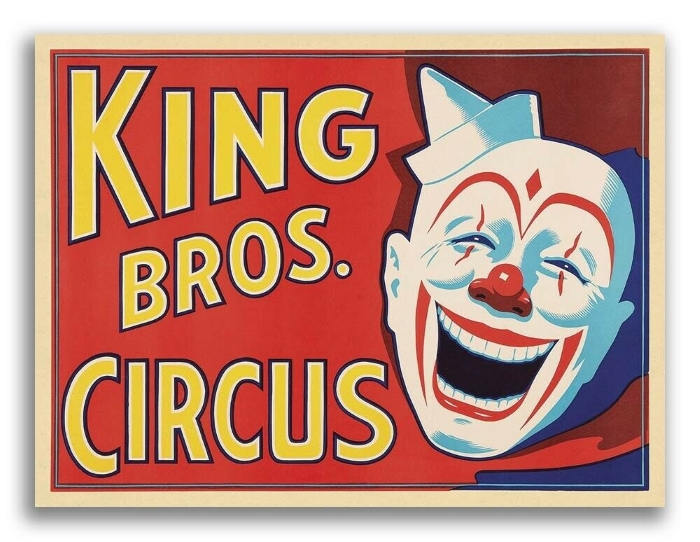 Mary Ann Cox Daniels, 21, and her father, Harry Cox, 47, both of Cold Spring, were recovering after he donated a kidney to his daughter.

A couple complained in a letter to the editor that the Help-a-Cat League, located at the corner of Routes 9 and 301, would not return lost cats to their owners unless they agreed to have the pets neutered.

The federal Environmental Protection Agency ruled that the buildings at the Marathon Battery Co. site on Kemble Avenue must be demolished and the soil beneath them remediated.

George Newlin of Bear Mountain Bridge Road in Garrison said someone had filled the trunk of his 1986 Volvo sedan with audio speakers, piles of tapes, a camera, unusual Christmas ornaments and other material. The only explanation he can think of is that someone loaded the car thinking it was theirs.

Traffic on Route 9 at Garrison’s Garage was detoured for the filming of scenes from the film Smoke, starring William Hurt, Harvey Keitel and Forrest Whitaker and directed by Wayne Wang (Joy Luck Club). 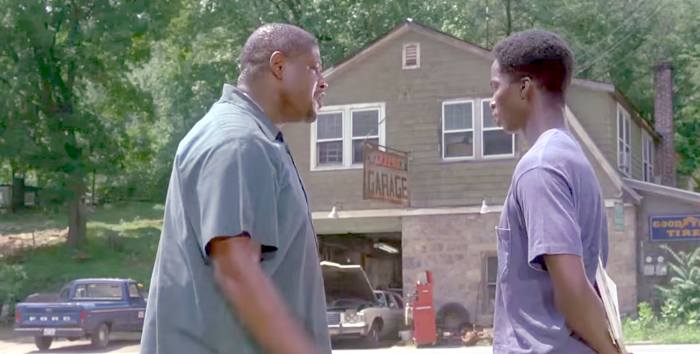 Forrest Whittaker, Harold Perrineau Jr. and the Garrison Garage in a scene from “Smoke.”

The Philipstown Community Council and the Garrison school district dedicated the Taylor Belchor Field and the Edith Nelson Playground. The Belcher family also donated its “Lincoln table” to the Putnam County Historical Society. According to family lore, when Lincoln’s train was delayed arriving at Garrison on June 23, 1862, for the president to visit West Point, members of the receiving committee passed the time by playing poker at the table.

6 thoughts on “Looking Back in Philipstown”