Board considering smaller structure as compromise

The Philipstown Town Board on Wednesday (June 26) postponed a vote on a settlement of a federal lawsuit over its denial of permits to build a 180-foot cellphone tower on Vineyard Road, off Route 9.

As part of the agreement, the town would permit Homeland Towers and Verizon to construct a 120-foot tower at the site.

The decision to delay the vote until at least July 3 came after a 90-minute discussion at Town Hall with more than 30 residents in attendance.

Under the proposal, which was drafted by Verizon and Homeland, the firms would submit a permit application within 60 days to build a “monopine” tower at 50 Vineyard Road that mimics a tree, and the town would issue the permit within 15 days if the structure complies with town laws. 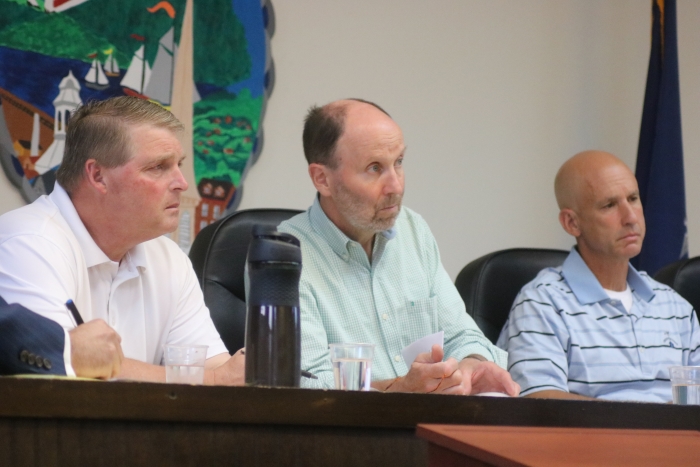 Verizon and Homeland would stipulate they would never ask to make the tower any taller. They also would provide up to $20,000 to reimburse nearby property owners to replace landscaping after construction and $21,261 to the town for expenses related to the earlier permit application.

According to the agreement, Homeland Towers also would provide space on the tower for three emergency services antennas.

Verizon and Homeland Towers sued in February 2018 after the Zoning Board of Appeals and the Conservation Board both denied their applications for permits. The plaintiffs claimed the decision violated federal law.

Attorney Andrew Campanelli, who represents a number of residents who live near the proposed tower site, objected on Wednesday to the short notice given for the meeting. His clients, he said, “need a meaningful opportunity to review what is now being proposed and a time to appear before the board and intelligently discuss it.”

Shea said sufficient notice was given under state law because the agreement became part of the public record on Friday (June 21), when it was posted on the town website. He said he also notified Paul Eldridge, who has acted as a spokesperson for residents, that same day.

Residents at the meeting raised concerns ranging from decreased property values and the ability of the access road to handle heavy equipment needed to construct the tower to its visibility, color and proposed landscaping and fencing. 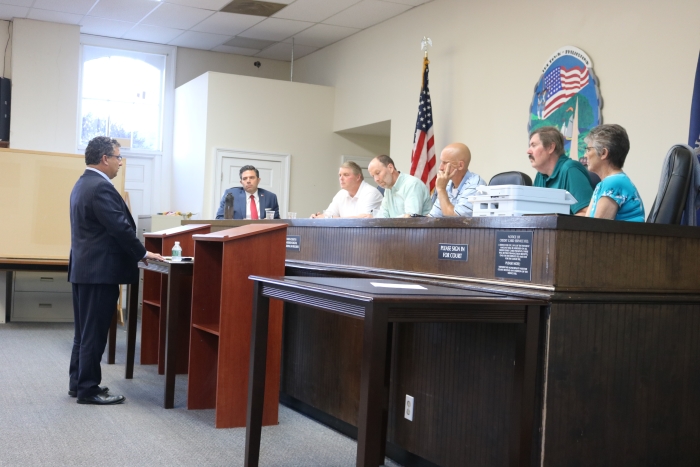 Andrew Campanelli, who represents a number of residents who live near the proposed tower site, addresses the board. Adam Rodriguez, Philipstown’s attorney on the issue, is second from left. (Photo by M. Turton)

When one resident, Cali Gorevic, commented that the tower isn’t necessary, Shea responded: “I hear what you are saying, but there is a much broader issue at play here: risk versus the rewards of settlement.” He cited the risks of the town losing its insurance coverage, paying substantial legal bills and the possibility that, even if the town prevailed, Homeland Towers and Verizon could return with other proposals.

Shea said that, in the board’s opinion, the settlement “is the best deal that the town can hope to achieve” and “a sure thing,” opposed to the uncertain outcome of litigation.

Adam Rodriguez, the town’s legal counsel on the issue, was asked if objectors to the tower could prevail in court. He replied that it was impossible to know. “There’s a possibility,” he said. “But I’ve had cases where I was confident and it came out completely differently than I anticipated.”

After the discussion, the board went into executive session, accompanied by Rodriguez, returning a few minutes later.

“We are very concerned with what we are hearing from you,” Shea said. “We agree it does need a little more time.” He said the board would postpone the vote, which was greeted by applause.

Shea said that Rodriguez and Campanelli would discuss how to incorporate concerns raised at the meeting into the proposed agreement.

“But this is not open-ended,” he cautioned. “It isn’t going to go on forever.”

Meanwhile, a lawsuit filed by Homeland and Verizon against Nelsonville in June 2018 after the village declined to issue a permit for a separate, 110-foot tower on a wooded ridge on Rockledge Road, above the Cold Spring Cemetery, continues. AT&T, which would use the tower, also sued Nelsonville.

During negotiations over the Vineyard tower, Philipstown suggested the Nelsonville tower could be constructed at the Philipstown Highway Department property on Fishkill Road.