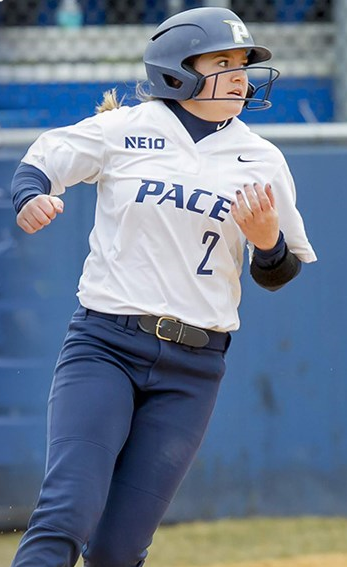 Allie Monteleone joined the softball team this spring during her senior year at Pace.

Allie and Hannah Monteleone and Sam and Chelsea Lisikatos of Philipstown are again competing this summer for the Irish and Greek national softball teams, respectively, at the European Championships and the Olympic qualifiers in the Czech Republic. After the initial round of group play, Ireland was 4-1 and Greece was 3-1.

After tryouts at Mamaroneck High School, Matt Champlin, a rising senior on the Haldane boys’ basketball team, was selected for the Hudson Valley team that will compete in the Basketball Coaches Association of New York’s Summer Hoops Festival in Johnson City from Aug. 2 to 4. The 12-man squad also includes Antonio Taylor from Peekskill, Jourdan Belcher from Alexander Hamilton, three players from Mount Vernon, three from White Plains and one each from Suffern, New Rochelle and Spring Valley.

Mark Robohm of Cold Spring will ride his bike 192 miles over two days in early August as part of the annual Pan-Mass Challenge to raise money for the Dana-Farber Cancer Institute in Boston. To contribute, see profile.pmc.org/MR0296.