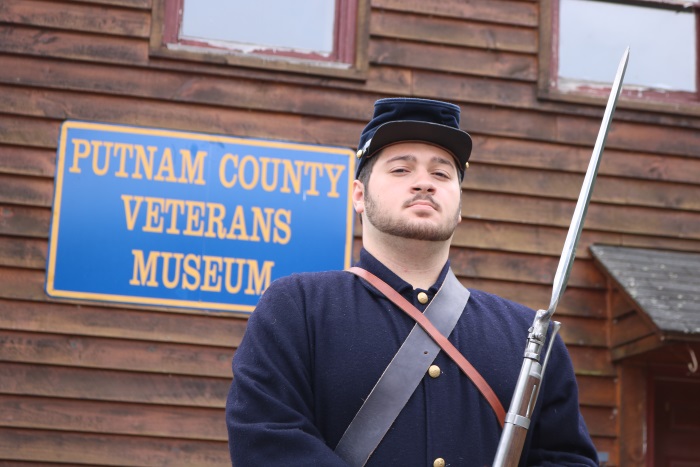 Last year, Tyler Dicembrino, 18, of Carmel, realized there is no memorial honoring Putnam County residents who served in the Civil War. A history buff who has studied the war since age 13, he raised $780 to cover the cost of a monument to be dedicated this Sunday (July 14), at 11 a.m., at Putnam County Veterans Memorial Park. Dicembrino collects Civil War memorabilia, is a re-enactor, and has visited countless battlefields across several states. He will speak at Sunday’s ceremony.

When did Civil War history capture your attention?

I first became interested in history, especially the Revolutionary War period, when I was about 11 years old, prompted by movies such as The Patriot. From there I expanded my interests — reading, looking things up, learning on my own. I watched other classic movies such as Glory. By the time I was 13, I was fully into the Civil War as a topic. When I saw videos and photos of re-enactments I thought that was the coolest thing and really wanted to make the Civil War my new hobby.

How will the monument honor Civil War veterans?
I found listings of every soldier who fought in the Civil War, in our local archives. We originally planned to have them all on the monument, noting killed in action, wounded, missing in action, but there are too many to list, almost 1,600. Instead, the plaque will indicate how many served from each of the six towns in Putnam County: Philipstown, 480; Carmel, 369; Southeast, 288; Putnam Valley 173; Paterson, 161; and Kent, 118.

What local Civil War veteran’s story stands out?
One I find extremely interesting is the Putnam County recruiter, Lt. Gerard C. Brown, a member of Company G, 38th New York Artillery, who recruited here for the 18th New York Militia. He went door to door. People were very uninformed; there were no phones or any kind of real communication. Some people were actually shocked to learn there was a war going on. In today’s social media world, everybody knows the second something happens. Back then, it could take months or even a year before someone figured out what was going on.

How extensive is your memorabilia collection?
I started collecting when I was 13 and now have about 50 pieces. My favorite is a Spencer repeating rifle made by Burnside Manufacturing. Only a small quantity was produced; I have one of the originals that was never used in combat.  I also have a copy of Gen. George McClellan’s post-war report, circa 1868, that was sent to Congress with his take on the war. It was an awesome find, an original copy given to a U.S. senator at the time and later sold at a New York auction. I also have swords and original canteens; replicas include my uniform pieces for re-enacting and identification badges.

Might this hobby lead to a career?
In the fall I’m going to George Mason University in Fairfax, Virginia, as a history major. I want to obtain my doctorate, focusing on the Civil War. I’d love to become a history professor specializing in studies of that era, to help preserve the history of our great country.