New York State troopers arrested Riley M. Palermo, 20, of Phillipstown, on charges of driving under the influence. They said he was traveling on Route 9 in the Cortlandt when he was stopped for a traffic violation.

State troopers arrested Ronald B. Nicholson II, 42, of Beacon, on charges of driving under the influence. They said he was traveling on Route 9 in Poughkeepsie when he was stopped at a sobriety checkpoint. He also was charged with possession of a controlled substance and marijuana.

Troopers arrested Darren Villiani, 25, of Beacon, in Poughkeepsie for allegedly driving under the influence.

Antonio Vuksanaj, 50, and Gina L. Vuksanaj, 50, of Carmel, were arrested by state troopers on felony charges of criminal mischief as a hate crime, felony criminal contempt, misdemeanor unlawful imprisonment and misdemeanor harassment. Antonio Vuksanaj was also charged with felony criminal possession of a weapon related to a previous weapon-related conviction. The state police said officers responded at about 8:15 p.m. to Chili’s Bar and Grill on Route 6 in Somers after a report of a domestic dispute. An investigation revealed both Antonio and Gina Vuksanaj allegedly violated an order of protection and blocked the retreat of the victim. The Vuksanajs then attempted to remove the victim from a vehicle through force and damaged the victim’s vehicle with a tire iron. Police said the alleged crimes appeared to be related to the victim’s sexual orientation. Antonio and Gina Vuksanaj were arraigned before the town of Somers Court and remanded to the Westchester County Jail in lieu of $7,500 cash bail or $7,500 secure bond. An additional full stay-away order of protection was requested on behalf of the victim and granted by the court. 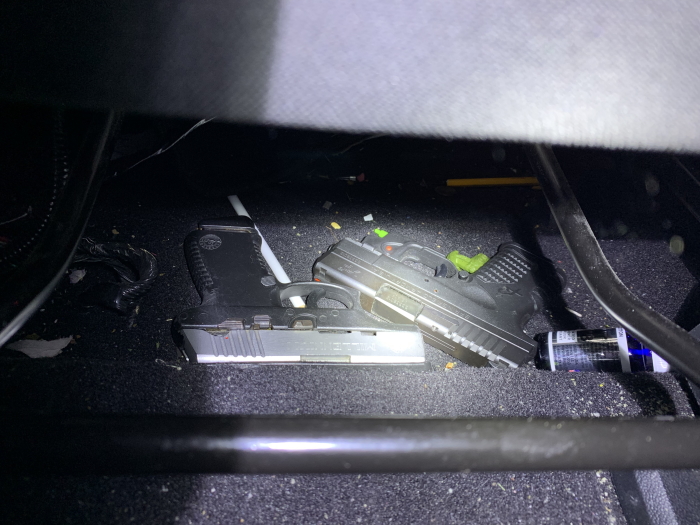 Working with FBI, state troopers arrested Patrick Williams, 31, of Brooklyn, on charges of criminal possession of a controlled substance, fleeing in a motor vehicle, aggravated unlicensed operation of a motor vehicle and possession of marijuana. He also was also charged in federal court with a felon in possession of a firearm and one count of possession of a controlled substance with intent to distribute. Police say they stopped Williams’ car at about 1:30 a.m. on Route 9 in Cortlandt, but that he led them on a chase into Peekskill and back to Cortlandt. After stopping the vehicle, officers realized Williams was exhibiting signs of an overdose and administered two doses of Narcan and called for emergency medical services.  The defendant was transported to Hudson Valley Hospital Center, treated and released. Further investigation found Williams was in possession of two loaded firearms, one of which was reported stolen. Additionally, Williams possessed approximately 7.8 grams of MDMA (Ecstasy), 4.4 grams of marijuana, and was wanted for a parole violation. He was arraigned in federal court in White Plains and remanded to the Westchester County Jail without bail.

State forest rangers, after receiving a call at 9:45 p.m. from Dutchess County 911, rescued a hiker on Mount Beacon. The 25-year-old hiker from Poughkeepsie went for a hike without any gear and got lost as it turned dark. She stated that she had asthma and did not have her medications and was distressed because she was lost in the dark. The hiker was instructed to stay put. Forest Rangers Lincoln Hanno and Patrick Lee responded using cellphone coordinates from the 911 call, which placed the hiker on the Fishkill Ridge Trail. The hiker was located and escorted back to her vehicle by 11:56 p.m.

Troopers arrested Liam Gallagher-Siudzinski, 27, of Cold Spring, on charges of aggravated DWI with a prior conviction, a felony. They said he was traveling on the Taconic State Parkway in Kent when he was stopped for a traffic violation.

As a nonprofit, we depend on readers to keep our website and print newspaper free and to pursue in-depth investigations. Members receive:

As a nonprofit, we depend on readers to keep our website and print newspaper free and to pursue in-depth investigations. Members of The Current receive: