It was early June, and I was hiking a few more of the Catskill High Peaks that one has to summit to qualify for the 3500 Club. I had already hit Sugarloaf and both peaks of Twin Mountain that day using the infamous Devil’s Path, a 24-mile trail that crosses several peaks and is usually written up in guidebooks with disclaimers like “only experienced and seasoned hikers should use this trail,” or “leave a notarized copy of your will in your car at the trailhead before you start.” I had hiked a few sections of it before, and although I don’t consider myself especially seasoned, I didn’t see what the big deal was. Then I slammed into a rock face with my ribs. 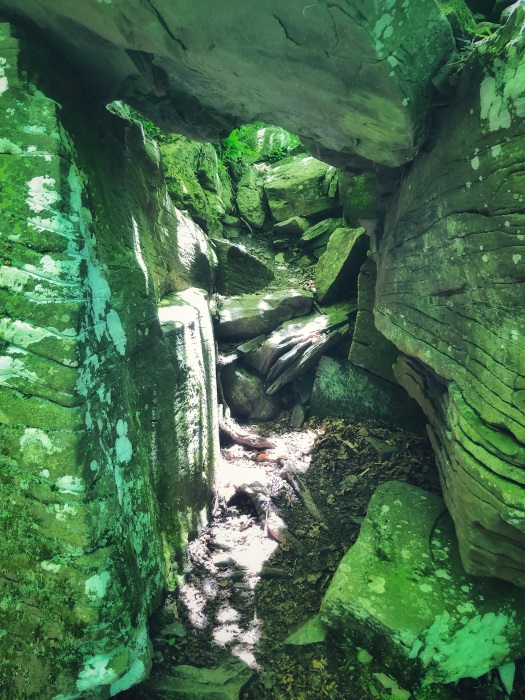 A tight squeeze on the Devil’s Path (Photo by B. Cronin)

Turns out some parts of the path are indeed quite devilish, especially if, like me, you’re a hiker and a runner but not a rock climber. Those who climb or boulder extensively can no doubt zip up and down those sheer and scrambly sections without a second thought, as muscle memory and instinct take over and the body picks out a clean line before the brain even knows what’s going on. I even watched a dog with a hiking pack scurry up one of them. But if you don’t climb a lot, then every vertical section seems insurmountable, which usually left me dangling with one foot on an eighth-of-an-inch outcropping and one hand on a scrawny tree root, swinging in the alpine breeze, questioning my recent decisions as well as my overall life choices.

The reason I was hanging there off the rock face by my fingernails is that I was trying to relax. I had just finished a six-week period in which I ran two trail marathons and a 50-mile race in an effort to qualify for next summer’s Vermont 100-Miler. The joy at finally qualifying for what will be my first 100-mile race soon faded into uneasiness as I wondered what to do over the next year. Wiser runners advised me to take a few months off in order to recover. There were, they said, ways in which my body was broken that I wasn’t even aware of. Start running again in the fall. Do something else. Have fun.

I am bad at fun. Or perhaps it’s better to say that my idea of fun has changed drastically over the past few years. Salads, staying hydrated, and getting seven to eight hours of sleep each night are now all things I would describe as fun, and if that sounds ridiculous to you, I can assure you I’m not thrilled about it either.

There are ultrarunners, good ones, who can subsist on a diet consisting primarily of whiskey and chicken wings and average four hours of sleep a night. I would love to know how they do it but I never get a chance to ask them because I can’t keep up with them. I don’t have an athletic background, and my interest in the sport is a mixture of mental and spiritual reasons, an excuse to be outside, and my damned journalistic curiosity that wants to know what my limits are. I need all the help I can get, so I quickly realized that I was going to have to take a holistic approach to training and take care of my whole body.

The good news is that after months of adequate sleep, plenty of water, and healthy eating to power lots of running, I had never felt better. The bad news is that I had never felt better. Turns out that drinking gallons of coffee instead of water, eating a pizza while you make dinner, and staying up until 2 a.m. reading every night eventually have a detrimental effect on your health and overall sense of well-being, despite the fact that I enjoy all of those things very much. Broccoli makes me happy, even though I hate it. It’s a complicated relationship.

So you can see why the idea of having an “off-season” seemed unappealing even if I knew it was for the best. I did not want to go back to the way I was. But then the whole rib thing happened and for a few weeks I didn’t have much of a choice, since the only way to heal a bruised rib is to, yes, take it easy.

I’d love to end this by telling you that taking some time off to heal helped give me perspective. That I am more than just a runner. But that’s not what happened. I felt cranky and foggy and useless, and kale didn’t help much. Turns out I need it all — the water, the sleep, the nutrition, and lots of running — to get to that good place. I can feel it now, as I’m running again, racking up the miles, sweating in this infernal summer heat, feeling everything I don’t need or want fall away and my good self, the one I’m always searching for, starts to re-emerge and I feel like celebrating. With pizza.