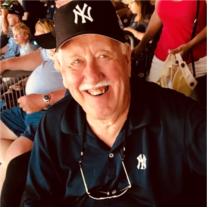 Robert was born in Cold Spring on July 3, 1937, the son of Dominick Rutigliano and Dorothy Hubbard Gallio. He played football, basketball and track at Haldane High School, graduating in 1955, and then served in the U.S. Army from 1956 to 1959 in Frankfurt, Germany.

After his discharge, he met Rose DelVescovo and they were married on Sept. 30, 1961, at St. Joachim’s Church in Beacon.

Robert retired from IBM in East Fishkill in 1991 and then traveled with his wife around the world. He was a passionate hunter, fisherman and golfer and a former member of the Manchester Rod and Gun Club. He was also a member of the Southern Dutchess Country Club and worked part-time in his retirement for the Joseph Smith Funeral Home in Mahopac. He was a devoted fan of the Yankees and Jets and played softball well into his 60s in the over-35 Beacon league.

A Mass of Christian Burial was held on July 20 at St. Joachim’s Church, with private entombment at Fishkill Rural Cemetery. Memorial donations may be made to the Disabled American Veterans at Castle Point (Chapter 144), P.O. Box 121, Wappingers Falls, NY 12590.