Vineyard Road tower, at reduced height, can go up

The Philipstown Town Board on Wednesday (July 24) unanimously approved a settlement of a federal lawsuit filed by Homeland Towers and Verizon Wireless, clearing the way for construction of a 120-foot cellphone tower on Vineyard Road near the intersection of Routes 9 and 301.

Board members expressed reluctance to settle the case but said circumstances, including concessions from the tower companies and pressure from judges for an out-of-court resolution, compelled them to do so.

After each side signs the agreement, a federal judge can order its implementation.

Homeland and Verizon sued Philipstown in February 2018 in federal court in White Plains after the town Zoning Board of Appeals and Conservation Board denied permits for construction of a 140-to-180-foot cell tower.

The ZBA cited a lack of need for the tower and said it conflicted with the zoning code and also threatened Philipstown’s scenic and rural character and nearby property values. In their lawsuit, the companies alleged the decision violated federal law.

The Wednesday vote by Supervisor Richard Shea and Councilors Mike Leonard, John Van Tassel and Judith Farrell (Councilor Robert Flaherty was absent) occurred at a workshop where residents, especially neighbors of the Vineyard Road site, again questioned the merits of the proposed settlement.

“I don’t feel the Town Board has been our friend or our representative,” one said.

Another asked whether the tower companies would remove the structure if it becomes obsolete. 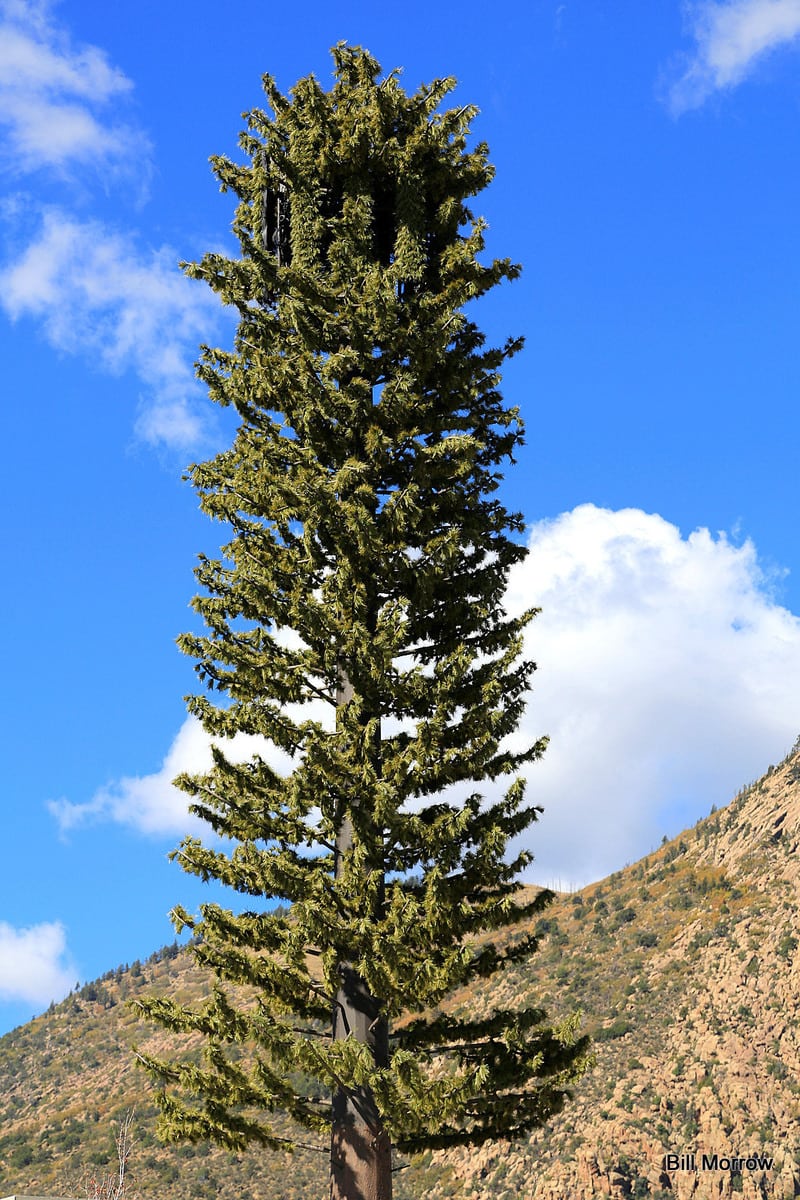 This tower, identified by the photographer as an example of Pinus Cellurius, is in Tucson, Arizona. (Photo by Bill Morrow)

The tower, disguised to resemble a pine tree, will be 60 feet shorter than originally requested and 20 feet shorter than a compromise that Homeland and Verizon at one point had proposed. Further, the companies waived the right to ever increase the height, or to even ask to raise it.

An 8-foot cedar privacy fence will surround the tower and vegetation will help screen it.

The companies will provide $20,000 to help neighbors landscape their yards but anyone accepting the funds will waive the right to make claims against the tower.

Lights at the tower will be fixed to project downward and use motion detectors and an automatic shut-off.

Emergency services can install three antennas on the tower at no charge.

Homeland Towers and Verizon will keep the 2,000-foot stretch of Vineyard Road from Route 9 to the tower’s driveway, plus the driveway itself, “in good order and repair and free of impediments to access.”

The companies will provide a $40,000 bond to Philipstown “to guarantee against any damage” to Vineyard Road from tower construction.

The cell companies will submit an application for a building permit for the tower within 60 days of the court’s acceptance of the settlement. After receiving the application, the town will issue a permit within 15 days.

Opponents also spoke out at meetings on June 26 and July 3, and the Town Board twice delayed action to consider that input and revise the document.

Now, Shea said on Wednesday night, “barring the tower not going up, everything that’s been requested by the residents has been put in” the settlement.

Shea called the agreement “the best outcome. It’s not a great outcome. No one on this board has ever said this is good for the town.” However, he explained, if it did not agree to the settlement, Philipstown could lose at trial and its insurance might not cover costs of extended litigation. “There are rumblings” already, he said.

In a letter to The Current, Shea wrote that the town had been told “in no uncertain terms by both a federal magistrate and a federal judge that we should seek a solution to the issue; hint hint.”

He added: “Sometimes tough and unpopular decisions have to made. The Town Board did not invite the cell-tower company to Vineyard Road; the landowner, Chris Fadden, did. These cases are hard to defend and after attending four hearings at the federal court in White Plains, spending countless hours in attorney meetings and sitting through a six-hour deposition, I have concluded it would be in the best interest of the town to come to a settlement that protects the viewshed and the entire town from financial hardship.

“I realize some residents of Vineyard Road will not be happy but in the interest of all the residents of Philipstown, this is the best decision.”

Van Tassel said the town’s persistent efforts after Homeland and Verizon presented their plans in 2017 had influenced the tower design, so that “it’s not as obscene as it was at 180 feet.” He recalled allegations that Town Board members were “cowards, afraid of” cell tower companies.

“That is not the case,” he said. “We sat here with the NRA [National Rifle Association, over firearm-related measures] and with Roger Ailes opposed to us [over a zoning law] without backing down,” he said. “And that [backing down] is not what we’re doing here.”

“I don’t believe we would have prevailed in court,” Farrell remarked.

Leonard said federal telecommunication laws severely limit local governments’ abilities to control cell-tower placement. (They are considered utilities such as the gas and electric company.) “We’re not an anti-cell tower town,” but need more leeway in determining where they go, he said.