Well over 100 people packed into Beacon City Hall on Monday (July 29) for a City Council workshop that at times resembled a court proceeding, with litigants taking turns for nearly 90 minutes arguing for and against the proposed expansion of the Danskammer power plant in Newburgh.

Once the testimony was complete, however, council members left little doubt that they plan to adopt a resolution on Aug. 5 opposing the company’s $450 million proposal to rebuild its nearly 70-year-old facility.

Every seat was taken at Monday’s meeting of the Beacon City Council. (Photo by J. Simms)

If the council passes the resolution, Beacon will become the third municipality in the Highlands — following Cold Spring and Philipstown — to speak out against the project.

Danskammer operates a seldom-used, gas-powered plant that its owners admit is long outdated. Located in the Town of Newburgh, it is 8 miles from Beacon but only a few thousand feet from the Hudson River. It is in the “pre-application” phase of Article 10 of the Public Service Law, the state’s five-step procedure for reviewing power-plant building proposals. It involves public outreach and submitting detailed information to the seven-member Board on Electric Generation Siting and the Environment, which is part of the Department of Public Service.

A formal application will follow, and if deemed complete, board officials will schedule a public hearing.

Although the hearing would be the highest-profile opportunity for the public to weigh in, the state board accepts comments throughout the Article 10 process. On Wednesday (July 31), a representative said more than 3,600 comments have been received so far. 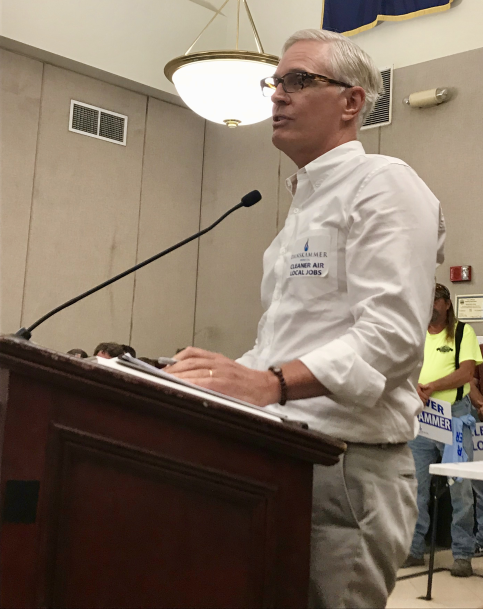 On Monday, with more than 50 union workers spilling from the audience into the City Hall lobby, Danskammer officials asked the council to wait until the proposal had been reviewed by the state before taking a position.

“Let us finish our work,” said Bill Reid, Danskammer’s CEO. “The state has assigned us a 1,000-page term paper. Let us get our grade before you decide it’s a bad idea.”

The new plant, Reid said, would use fracked gas to run more regularly and more efficiently once Indian Point closes in 2021. It would be fast-starting and air-cooled, rather than water-cooled. Its construction would be privately funded, he said.

However, the plant would fall short of New York’s Climate Leadership and Community Protection Act (CLCPA), which calls for net zero carbon emissions from the generation of electricity by 2040. Gov. Andrew Cuomo signed the act into law on July 18 (see Page 18).

At the Monday meeting, Todd Diorio, the president of the Hudson Valley Building and Construction Trades Council, said the goals of the CLCPA “are not reachable” and argued that an expanded Danskammer plant would fill in gaps that renewable energy sources may not meet. 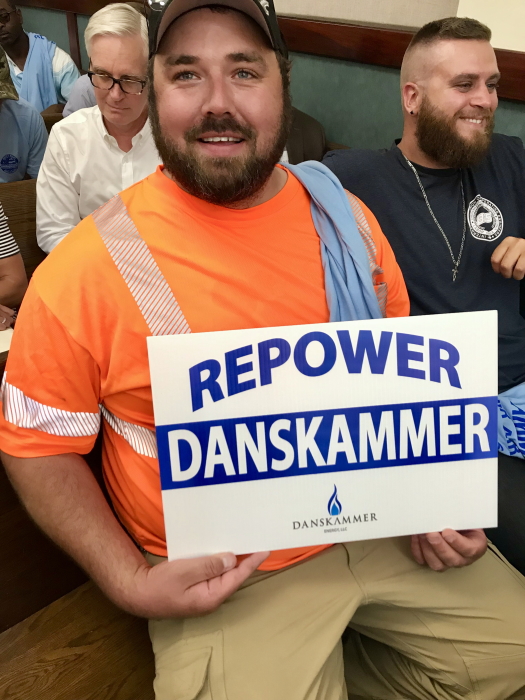 James McDermott, a member of the local operating engineers’ union, expressed his support for the project. (Photo by J. Simms)

“If we are to move to renewable power, we want to do it in the best way possible,” said Reid, the Danskammer CEO. “If we want to support a grid that is very violent in its movement, we have to have technology that can turn on in minutes and can ramp up very, very quickly. All of the plants that we have in the region now cannot do that.”

Representatives from Scenic Hudson and Food and Water Watch asked the council to oppose the plant, which they argued would increase pollution, create public health hazards and contribute to climate change.

While Danskammer says its new plant will be an economic boon and an environmental improvement, Hayley Carlock of Scenic Hudson countered that its dependence on gas, a non-renewable fossil fuel, would lock the region into relying on a plant that she said would be outdated before it’s even built.

“The Hudson Valley should be a model for sustainable and clean energy, not for continuing to use fossil fuels,” she told the council. 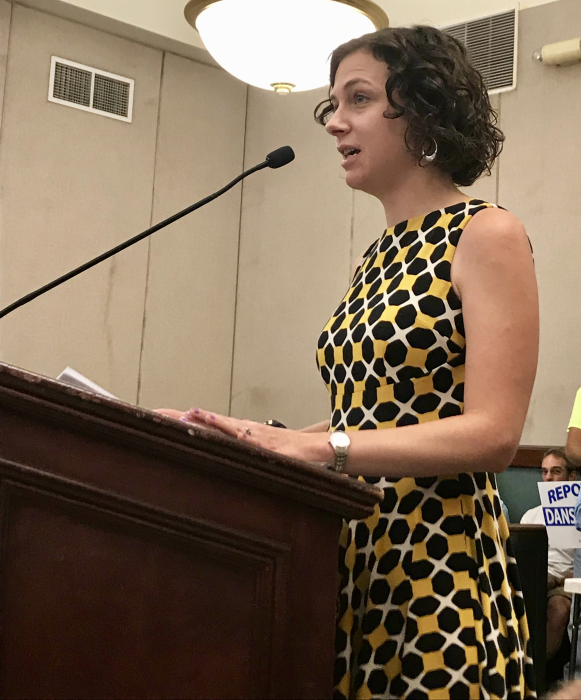 Additionally, methane, the primary component of natural gas, traps much more heat in the earth’s atmosphere than carbon dioxide, said Andrew Pezzullo, an organizer at Food and Water Watch. Fracked gas, he said, “has a more accelerative effect on climate change than coal or oil. The science is fundamentally clear at this point.”

Those arguments seemed to resonate with the Beacon council, which needed only a few minutes to set its course for Monday.

“We have an obligation to use our voices to make a statement,” said Council Member Amber Grant. “I do not want to see the Hudson Valley become the center for natural gas and fossil fuels. I’m distinctly opposed to this.”

With the other members in agreement (Ward 2 representative John Rembert was not at the meeting), the council is primed to approve a resolution urging Cuomo to reject the Danskammer proposal and, instead, focus state resources on providing “living wage jobs for the construction and operation of clean-power generation, brownfield cleanup, or other appropriate economic development projects” in the region.

The draft also indicates that the council will “fully and objectively” consider any new information discovered during the state’s review.

5 thoughts on “An Electric Response”