A lot of teenagers dreamed of heading to Woodstock in 1969. Sharon Watts wasn’t one of them. For starters, she got her driver’s license just two days before the festival began on Aug. 15. 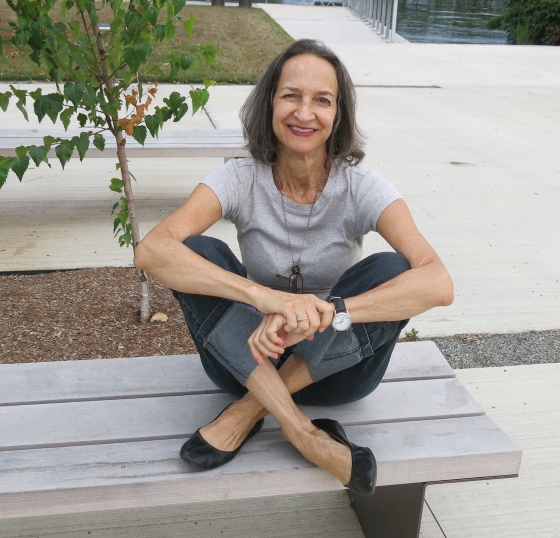 A self-described “good girl” from suburban Pennsylvania, she was more interested in pop culture and fashion than hippies and rocking out. Fifty years later, though, she’s kicking herself for missing out, and making amends by immersing herself in the time and place.

A day trip in 2017 from her Beacon home to the Woodstock Museum at Bethel Woods stimulated her interest and led to a book she wrote and illustrated, By The Time I Got to Woodstock: An Illustrated Memoir of a Reluctant Hippie Chick. She’ll be reading from it, sharing her artwork and talking trivia at the Howland Public Library on Tuesday, Aug. 13, at 6:30 p.m.

“The museum made me consider who I was in 1969,” Watts explains. Over the cold winter months that followed, she started watching YouTube videos of the musicians. “It wound up being a full immersion,” she says.

“It made me feel weird because I wasn’t involved,” she says. “I lived through it, but didn’t participate. The place I grew up in was a little stuck behind, still in the Eisenhower era. It was on the cusp of changing, but dragging behind. For instance, girls couldn’t wear pants at my school until 1979 — and this wasn’t a Catholic school with uniforms. In our little world, we wanted to wear pants, some of the boys wanted to have long hair, but the community wasn’t ready for it.” 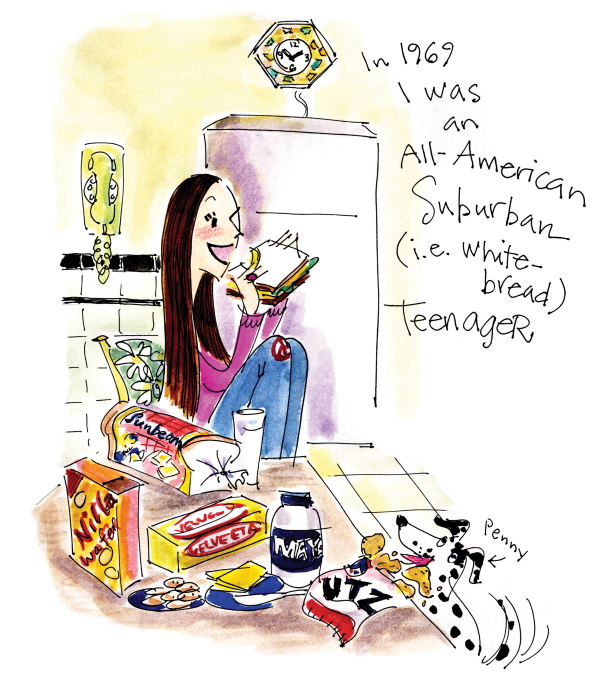 After graduating from high school, Watts moved to New York City to study at Parsons School of Design. “It was as much an escape from the suburbs as any real plan,” she recalls. “I was interested in fashion, but I couldn’t sew or drape.” She became a fashion illustrator and until 2000 freelanced steadily for The New York Times, often illustrating Style Editor Carrie Donovan’s weekly column.

Sharon Watts’ book includes a selection of tidbits about the festival, such as:

Granola was first introduced to the average American as part of Wavy Gravy’s announcement: “What we have in mind is breakfast in bed for 400,000!” It was served in paper cups.

Hog Farm, started by Wavy Gravy and his wife, was a hippie commune whose members were flown in from New Mexico to manage and feed the crowd. They also ran the freak-out tents, talking people down from bad acid trips.

Official Woodstock merchandise did not exist. No one made money on souvenirs, and T-shirts with the logo were only worn by the crew. Festival programs, discovered later in boxes, went mostly undistributed.

Watts moved to Beacon shortly before 9/11, in part because she was in a relationship with a firehouse captain, Patrick J. Brown. “I was just looking for a quieter place,” she says, “and I was working on assemblages, for which I needed a place that could be messy.” Brown died rescuing victims during the 9/11 attacks. In her grief, Watts collected stories about him for a 2007 book, Miss You, Pat: Collected Memories of NY’s Bravest of the Brave. 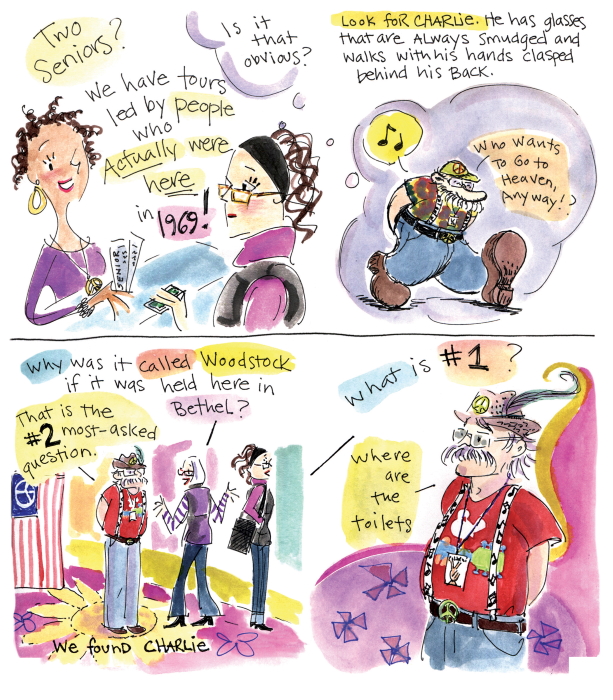 Soon after her visit to the Woodstock Museum, she received a drawing pen and notebook as a Christmas gift. “I started drawing again in January 2018,” Watts says. She began with figures without much detail and added clothing, accessories and “other little details to amuse myself, then word play.”

Did you make it to Woodstock? Reporter Michael Turton is collecting recollections and photos for a story in our Aug. 16 issue to mark the festival’s 50th anniversary. Email him at [email protected]

She watched video clips from the period such as Mod Squad (which ran from 1968 to 1973) — “it allowed me to go back into a time machine of my teens, corroborating it all on YouTube” — and began developing portraits of the musicians, including Jimi Hendrix and Janis Joplin. 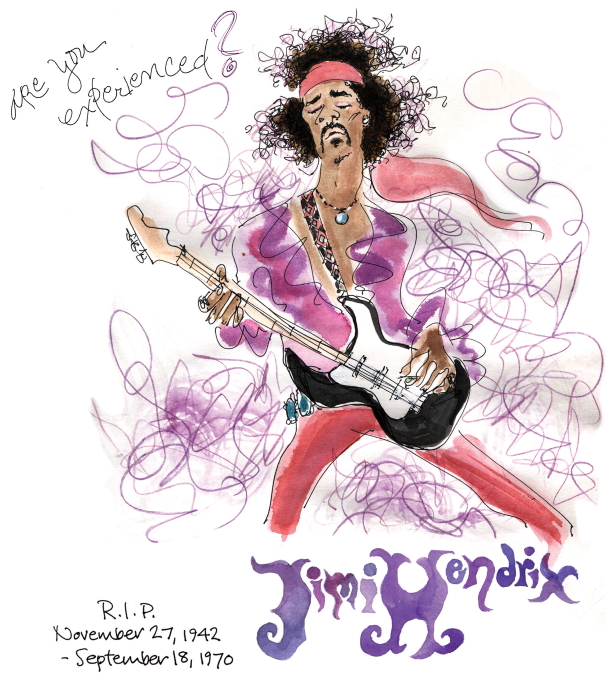 “My work before 9/11 was kind of whimsical, but that didn’t feel right afterward, and now I’m moving on again from that,” she explains. “I loved exploring the archival resources, and tying the music in to an era. It’s relevant to what’s going on today, with the social turmoil and politics. It’s eye-opening for those people not alive then and a good touchpoint for people to see what was going on in that era. It was the first time that war was televised, which made such a major impact.”