It was mid-morning on the fourth day of the weeklong biking trip when I knew I had been defeated.

Until then I’d maintained a reasonably positive attitude. The June trip — 275 miles along the Blue Ridge Parkway through my home state of North Carolina and into Virginia — had been harder than any I’d done before.

I had expected that. For the last five years I’ve gone out each summer to challenge myself on two wheels. The first ride was in 2015, when a friend and I traveled the length of the Hudson River, from Battery Park in Lower Manhattan to its origin deep in the Adirondacks.

I started doing the rides because it felt like the wheels had fallen off my life. My wife had been battling cancer, which had consumed the preceding four years of our lives. (She’s healthy now.) I also needed space to get away from a dead-end job — not this one — and all the other noise of the world to think about what was important and how I want to spend my time on Earth. 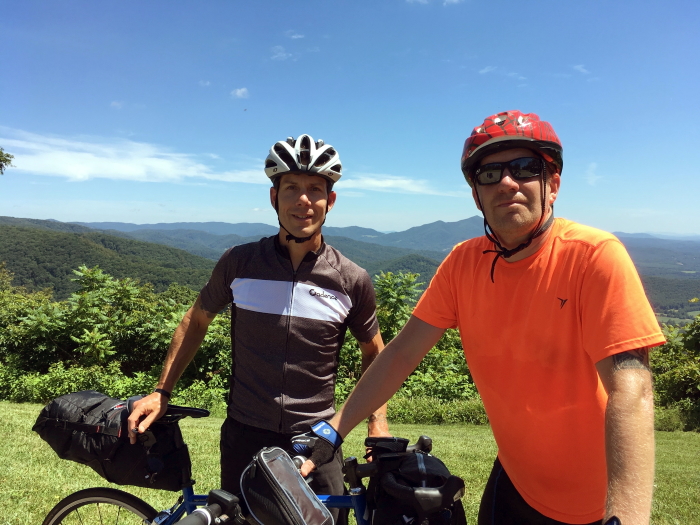 This year, everything about the Parkway was challenging. There were lots of hills and it was hot and my bike was heavy with the weight of my camping gear on the back. But on Day Four, something set one grueling incline apart.

“We are completely free up here,” my riding partner, Casey Kaufman, one of my oldest friends, said to me early in the week. A seasoned cyclist, he was right at home on the Parkway’s up-and-down terrain, but with a day and a half to go, free wasn’t what I was feeling.

The expansive views that had motivated me to climb into the clouds (the elevations can top 5,000 feet) were missing. Instead, I was riding in a tunnel of dense, green vegetation. As I pedaled, my thighs burning, I felt trapped.

The Parkway is hard on long-distance bikers because there’s little food and drink if you’re not prepared. It’s not uncommon to ride for 30 miles or more without seeing an exit, so I had planned refueling stops carefully.

But — news flash! — the internet can be wrong. By the second day we’d coined a term — “Parkway’d” — for each time a restaurant was closed when the internet said it would be open. One time, the place didn’t even exist.

That morning we’d been Parkway’d out of breakfast, so we had 40 miles to ride before lunch. That was half my problem.

The other half was the hills. The Parkway, which weaves for 469 miles through the Appalachian Mountains, is infamous — with bikers, at least — for its lack of flat surfaces. No matter where you are on the route, you’re either going up or you’re going down.

I’d anticipated that, too, and trained hard. I spent hours over the winter sweating on the stationary bikes at The Studio @ Beacon on Main Street. In May, my wife and a friend and I completed the Harryman Triathlon as a relay team at Harriman State Park. I was routinely knocking out 50- and 60-mile training rides and even pulled off a 100-miler, climbing Bear Mountain twice in a day. 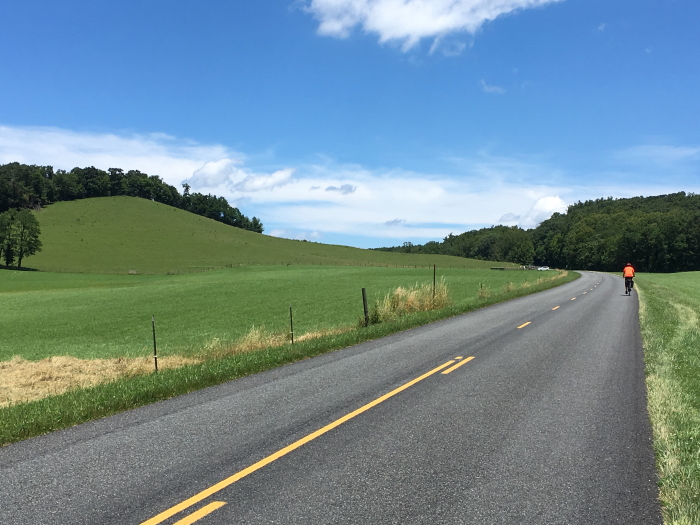 The author on a slight incline

After all that, it was heartbreaking to realize I was still out of my league, although, in my defense, some of the Parkway’s climbs are 10 miles or more, and many are more than 5 miles. That’s like riding up Mount Beacon five times — and then doing it again. All day.

We’d ridden for three hours that Thursday morning when I broke down.

I stopped pedaling and, straddling my bike, unstrapped my helmet and dropped it on the road. As it bounced away, I put my elbows on the handlebars and my head in my hands. I felt like crying but didn’t have the strength. Instead, sweat dripped from my face like a leaky faucet.

I stayed there, hunched over, for 10 minutes, angry at myself for wanting to quit. “It never stops,” I said to myself. But what could I do? There was nowhere to go, so, grudgingly, I continued up the hill. When I caught up with Casey a few minutes later, all I could muster was, “I’m done.”

Mentally, I was. Realistically, I had 75 more miles to ride.

We finished the next day at the Parkway’s northern terminus in Front Royal, Virginia, although, after 286 miles, I felt deflated rather than inspired. It bothered me for weeks.

Since I’ve been home, thankfully, my focus has shifted to new challenges, such as my 7-year-old, who is learning to balance on two wheels. There’s no secret to learning to ride a bike, I told him, other than practicing. You’re going to fall, because everyone does, but it won’t hurt for long and if you get back up, you’ll be that much closer to riding.

As I prepare to leave for another ride next week (three more days in the Adirondacks), I realize I would do well to heed my own advice: Keep pedaling.

Back onto the saddle I climb.