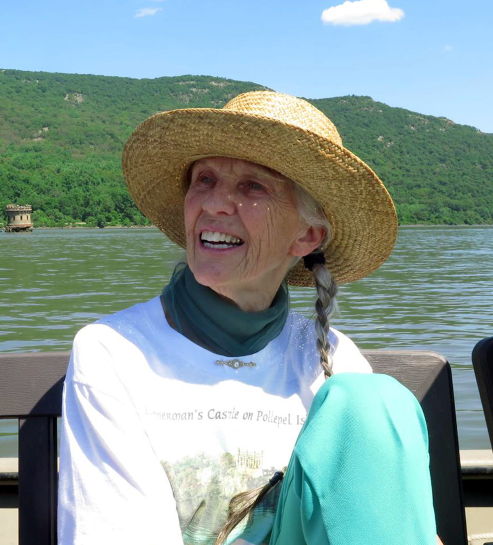 Eleanor Owen Seeland, 87, lived on Bannerman’s Island as a child in the 1930s and early 1940s. She took time out from mowing her lawn to answer a few questions and will do the same during tours of the island on Aug. 17 and Sept. 21, as well as sign copies of My Name Is Eleanor: A Bannerman Island Adventure, a children’s book by Wes and Barbara Gottlock.

How did you come to live on Bannerman’s Island?
My parents were the caretakers; we lived there until I was 10 or 11. We had our own house but when the arsenal was built around it, we lost the windows on two sides. It made it look like our house was part of the arsenal! Dad avoided the draft during World War II by joining the Merchant Marine. We moved to Wappingers Falls while he was in the service but my mom continued working on the island.

Where did you go to school?
We went to the Dutchess Junction School on Route 9D. The building is still there, but I think it’s a house. We went ashore by boat every day, which could be frightening in winter. The island’s harbor would freeze over. My dad had a flat-bottom boat and he’d pole it onto the ice until the boat fell through. Then he’d pole it farther out until it fell through again. Eventually we’d get to open water.

Was it a harsh life?
Ignorance was bliss; I had nothing to compare it to. The electricity didn’t always work. The winter was very cold, and the furnace never got above 60 degrees. Mom piled coats on top of us in bed, and the water on my end table would be frozen in the morning. My brother and I would sit by the fireplace, toasting one side, then the other. The wind would howl, especially in winter. I’d sometimes be scared at night.

What do you remember about the river?
We spent hours and hours fishing for sunfish that we threw back. I was a little lonely at times; my brother often did his own thing. But we’d boat and swim. We weren’t supposed to take the boat out of the harbor but sometimes we’d get brave. We also weren’t to go into the turrets on the island but we’d climb in through the windows. I liked lying on the rocks in the sun. And it was always an event when the day-liner cruises came up from the city, although passengers would throw their debris into the water. The cruise boats made big waves that caused an undertow, and I was caught in it swimming once but grabbed hold of my brother.

What else did you do for fun?
In the summer we had lots of company. We liked watching the speed-boat races. Once, one of the boats burned up and my dad and another caretaker had to rescue the driver at the lighthouse. Sometimes we’d have picnics over at Plum Point; there was a great sandy beach there. In winter, Dad would take his motorcycle on the frozen river. We’d skate on the ice. In spring, the ice would pile up on shore in big, high stacks. They were pretty. It took them a long time to melt and float away.