Beacon City Planner John Clarke is assembling a list of houses and buildings for consideration by the City Council to include in the Historic District and Landmark Overlay zone. 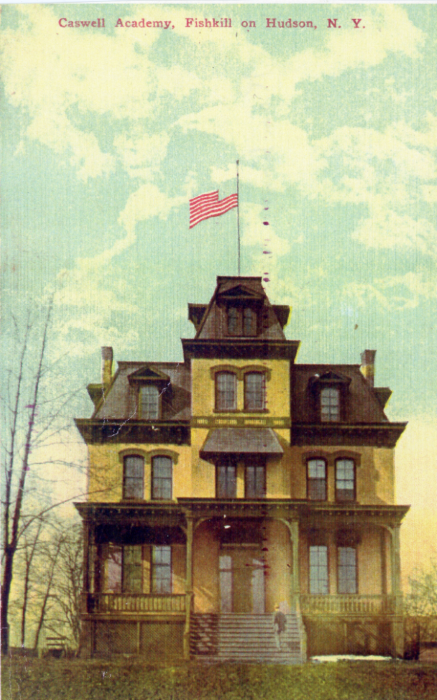 A postcard of the Caswell Academy in the 1890s (BHS)

Another possibility is 139 Rombout Ave., which is today a nondescript apartment building. From 1885 to about 1920, it housed four private schools. In the early 1920s, the building was reconfigured into the Genuine Panama Hat Co. to produce straw hats. (The third story burned in a 1924 fire.)

In 1885, James Frederick Smith moved his boarding school for young men who planned to go into higher education from Main Street in Fishkill Landing to the building in what was then the undeveloped neighborhood of Wiltsie (Rombout) Avenue. He called it the Mount Beacon Academy. 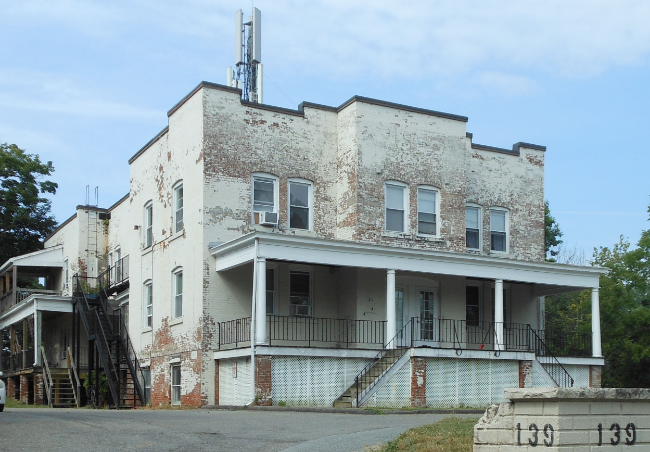 The school caught the attention of James DeGarmo of Rhinebeck, who had run a prep school there since 1860. He bought out Smith and in 1890 changed its name to The DeGarmo Institute. It operated until his retirement in 1898. About two years later, a West Point graduate named Vasa Stolbrand opened the Mount Beacon Military Academy. One of his cadets was Carmelo Castro, the brother of the president of Venezuela.

The final school to occupy 139 Rombout was the Caswell Academy, run by the Kennedy brothers, Thomas and James. The latter was a champion swimmer who specialized in the backstroke and ran physical education at the academy. Thomas, the superintendent, hired his two sisters, Lotta and Robin Kennedy, as teachers.

Among the alumni was Percy Helton, a Broadway child star who later appeared in dozens of movies. Rupert Hughes, a novelist and screenwriter and brother of Howard Hughes, was friends with the Kennedys and stayed at the school several summers to write when the boarding students were on vacation.

Good horse sense prevailed on June 18, 1903, when the Lewis Tompkins Hose Co. obtained Ben, a horse that remains to this day a legend in Beacon firefighting.

Ben was in service as one member of a three-horse “hitch” for only three months with the New York City fire department when he was called to Beacon to pull solo duty for Tompkins Hose. In his 15 years of service, Ben provided not only the horsepower needed to transport firefighters but performed the role of unofficial goodwill ambassador for Beacon. 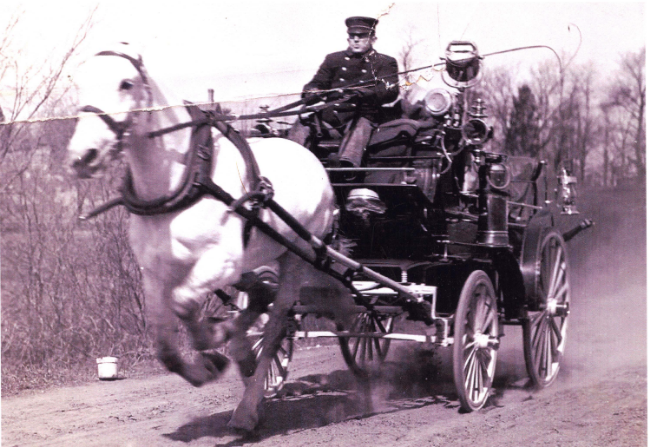 With his white hide and almost human-like personality, Ben was a natural performer. At parades he could dazzle the crowds with his proud bearing and his considerable showmanship skills — on command, while pulling a wagon, he could raise up his hind legs in salute.

When, in the winter of 1910, Ben slipped on the ice careening down Ferry Street to a fire, tumbling horse, wagon, and six firemen to the ground, equal concern was given to horse and men (all recovered). In 1918, Ben was put out to pasture on John Ganvoort’s farm in Glenham, where he grazed contentedly until the end of his days in 1926.

Beacon High School in 1925 had 36 graduates — 14 boys and 22 girls — including two notables: a man far beyond his teen years and the first black graduate.

The year before, Benjamin Hammond had retired after serving for 30 years as the school board president. The class was the first to graduate, thanks in part to Hammond’s efforts, in the school’s new auditorium. In gratitude, Mayor Earnest Macomber presented Hammond with an honorary diploma. 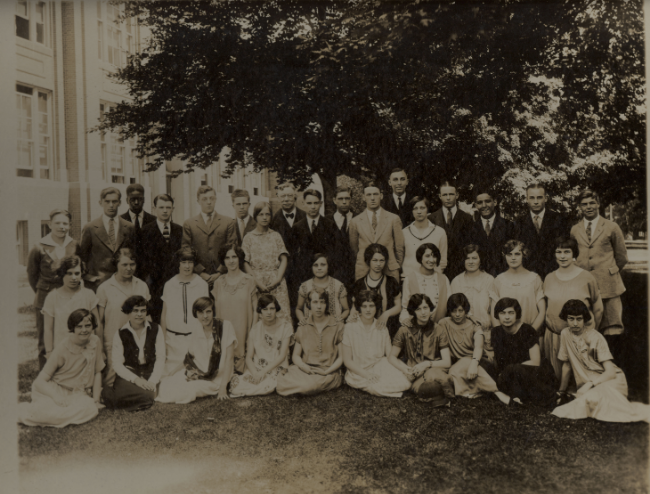 In this photo of the 1925 class of Beacon High School, William Howes is third from left in the back row and Benjamin Hammond is eighth from left (BHS)

The audience applauded, according to newspaper accounts, for five minutes in “a great demonstration of love and affection.” Hammond in turn presented the first diploma to Edward Todd, 14, the youngest graduate.

The second historical moment of the night was the presentation of a diploma to William Howes, the high school’s first African-American graduate. Howes “was accorded an impressive demonstration,” a local paper noted. “None in that audience could fail to be impressed by this beautiful exemplification of the ideal upon which the American nation was founded.”

In its heyday from the early 1900s through the 1920s, the cottage colony on Mount Beacon was a bustling seasonal community of 20 families.

The Incline Railway made cottage life on the mountains possible, with its trolley cars delivering everything from the lumber to build the cabins to the summer guests themselves. Some owners gave their mountain retreats whimsical names such as Kamp Upanuff and Up-Hi-Er. 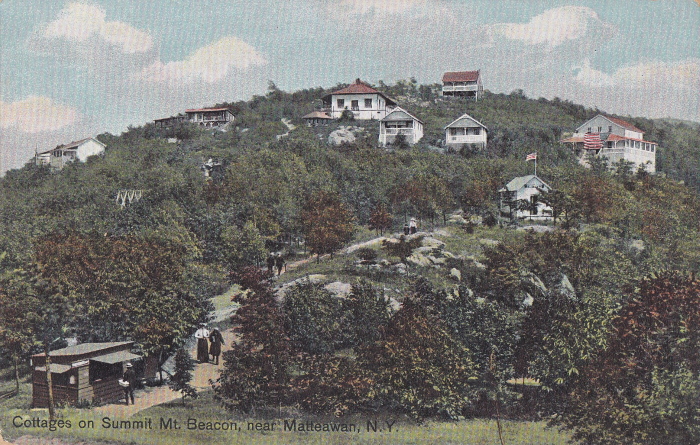 A postcard showing the cottage colony on Mount Beacon (BHS)

In 1911, life in the colony became more bearable (and popular) with the building of a water-delivery system, linking by a pipeline the cottages to the Mount Beacon Reservoir and ending the laborious chore of lugging pails of water up to remote cabins. A number of cottagers that summer were Newburgh residents such as Dr. W.V. Randall, a dentist.

In a comment left at beaconhistorical.org, Tom Manuccia, 72, recalled that his parents owned one of the cottages from the late 1940s until a ski area bought the lodges about a decade later. “I was almost born on top of the mountain,” he wrote.

Today, only a single cottage remains, which has been vandalized. However, hikers still can walk along Howard’s Path and see the ruins of a half-dozen cottages, with their quaint rockeries still coming into seasonal bloom.

The first monument in Beacon’s history to be dedicated to all of its war dead was unveiled in front of Memorial Hall during the Memorial Day services of 1947. The monument was donated by Beacon Post 203 of the American Legion to replace the wooden Honor Roll that also stood in front of the hall painted with the names of city residents who served during World War II. 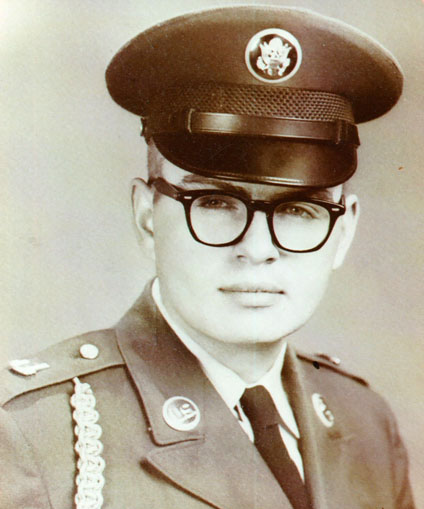 J. Gordon Flannery, a Navy veteran who was a justice on the Dutchess County Supreme Court, was the master of ceremonies. He said this:

“It seems only a short time ago that we assembled here to dedicate the Memorial building after a war which we thought marked the end of all wars. It didn’t seem as though it could happen again. But it did. I hope God in his infinite wisdom will see that it doesn’t happen again.”

One of the more poignant moments of Memorial Day services is when the names of the war dead are read aloud, with a bell sounding for each name. As the years have rolled by, it becomes harder to associate faces and memories with those names.

One name for me that is a reminder of that great sacrifice and loss is Terry O’Neil. Terry was a year ahead of me at Beacon High School but we shared a gym class under Coach Jim Gauriloff and had many laughs trying to avoid the inane drills and games. After high school he joined the Army and was deployed to Vietnam in November 1967. He was killed there on May 23, 1968. Terry’s is one of scores of names etched onto another stone near the 1947 War Monument.