GIVING UP, FOR NOW — Old Town Road in Beacon has a hand-painted sign, at least until the rap-country song of the same name by Lil Nas X and Billy Ray Cyrus falls off the Billboard pop chart, where it has spent a record 17 weeks at No. 1. Other cities report their Old Town Road signs disappeared, as well; Wellesley, Massachusetts, lost six — three at each end, at $250 each — before it stopped replacing them. (Photo by Brian PJ Cronin) SILENT PROTEST — A memorial appeared at the end of Main Street in Cold Spring on Aug. 9, a week after a gunman in El Paso, Texas, killed 22 people, and another in Dayton, Ohio, killed nine. (Photo provided) 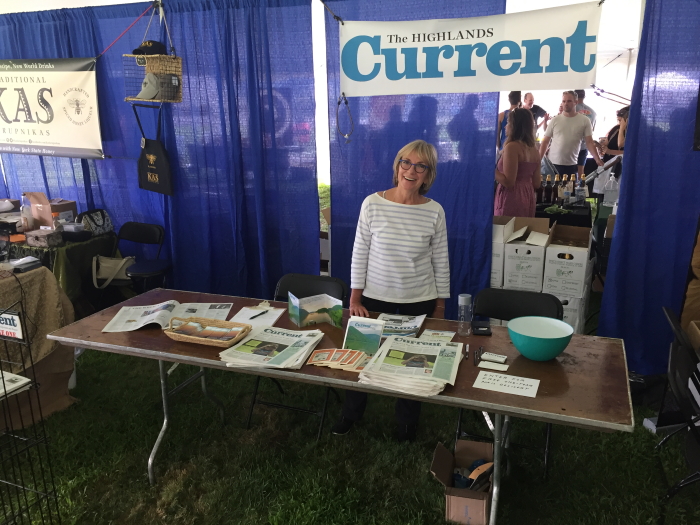 WINE WEEKEND — Kyle Good, a board member of Highlands Current Inc., which publishes The Current and this website, volunteered at our booth at last weekend’s Wine & Food Fest at Mayor’s Park in Cold Spring. (Photo by Chip Rowe) 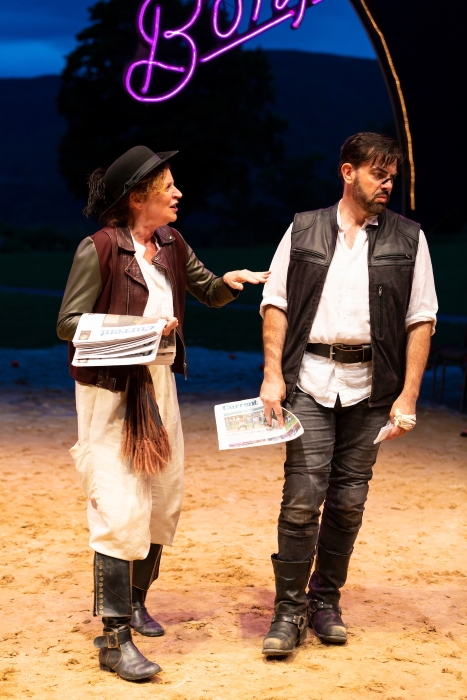 CAUGHT WITH THE CURRENT — In a scene from Cyrano, which has five performances remaining at the Hudson Valley Shakespeare Festival at Boscobel in Garrison, Nance Williamson (as La Bret) informs Jason O’Connell (Cyrano) that his amazing sword and verbal skills are headline news after he humbled a feckless rival. (Photo by T. Charles Erickson/HVSF)

LOST BUDGIE — A budgerigar (or parakeet) flitted between Cold Spring and Garrison for at least two days last week before being nabbed on a rainy night in a village backyard on Aug. 6 by The Current’s Liz Schevtchuk Armstrong. The bird’s owner, or anyone who knows the owner, can email her at [email protected]