The Cold Spring Village Board, at its Tuesday (Aug. 13) meeting, again discussed whether to allow food trucks but trustees said they would make no decision until Michelle McGuire’s Country Kitchen has completed a second weekend “trial run.”

McGuire set up her food truck in Mayor’s Park on the weekend of July 20 but mechanical problems and park events have so far prevented a return visit. 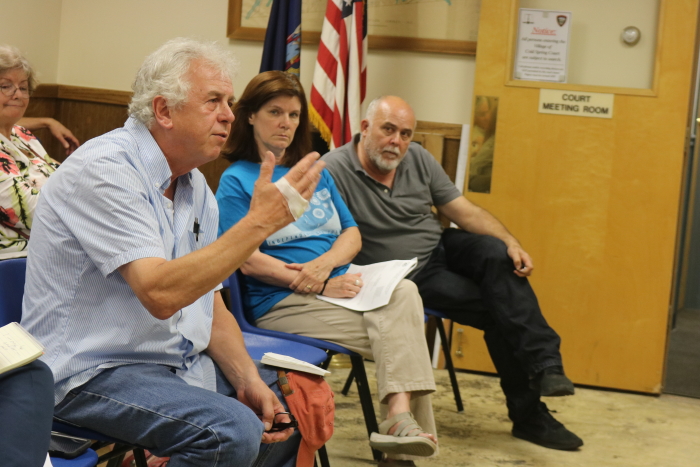 “It’s not fair,” Price said. Restaurants on Main Street “pay all our bills, property taxes, pay for water and donate to nonprofits.” Food trucks, he said, don’t have those expenses but can come in during the busiest seasons and “pick off business.”

The Village Code, which is being updated, requires food trucks and other moveable businesses to pay a fee of $25 per day, an amount Mayor Dave Merandy has said needs to be increased.

Merandy suggested that if food trucks are allowed it only be at Mayor’s Park and be limited to a single vehicle. There also has been discussion of allowing a truck at Dockside Park when Seastreak cruise boats visit on fall weekends and restaurants have a hard time keeping up with the influx of visitors.

Deputy Mayor Marie Early pointed out that food tucks can operate on private property in Cold Spring without a permit.

Saturday, Oct. 26, will be a busy day in the village. At least one Seastreak cruise boat will bring hundreds of visitors from New Jersey and New York City to town from noon to 4 p.m.; a second Hops on the Hudson beer fest will occupy Mayor’s Park from noon to 5 p.m.; and the annual Cold Spring Area Chamber of Commerce Halloween Parade will kick off at 4:30 p.m. (a half-hour earlier than its usual start to ease traffic congestion).

In his first report, newly hired Superintendent of Water and Wastewater Matt Kroog said there was no effect on the quality of the village water supply as a result of a vehicle driving into the coffer dam on July 18 just upstream of the water treatment plant on Fishkill Road. Koop said booms put in place by emergency personnel prevented any fluids leaking from the vehicle from flowing downstream. He said he would look into placing a barrier at the site.

The Cold Spring Police Department responded to 73 calls for service in July. Officers also issued 49 moving and 134 parking tickets. Officer-in-Charge Larry Burke urged residents to lock their cars as the county has had thieves “looking for easy grabs.” Burke also reported that while he received no complaints about last week’s Wine & Food Fest at Mayor’s Park, there were parking problems that should be resolved before other events there.

The board authorized the sale of 59 square feet of village-owned property at 15 Main St. A cafe and one-room tourist home will be established there.

The Town of Philipstown offices will operate out of the Old VFW Hall on Kemble Avenue and the American Legion on Cedar Street during renovations to Town Hall scheduled to begin later this year.