After Rep. Joaquin Castro of Texas, a Democrat, last week posted on Twitter the names of 44 donors in El Paso who have given the maximum $2,800 to Donald Trump’s re-election campaign, the president’s son alleged that Castro had “shared personal information” about them and compared the tweet to a hit list.

In fact, information on how much individuals give to federal candidates and/or political action committees (PACs) is easy to find — it’s posted online by the Federal Election Commission and can be searched by name, city, zip code, candidate or employer. Even people who gave $1 — presumably to help their candidates qualify for the Democratic debates — are included.

Individuals may give up to $2,800 per federal candidate per election (primary and general), as well as annual contributions of up to $5,000 to PACs, $10,000 to state party committees and $35,500 to national party committees. (So-called “Super PACs” can accept unlimited money.)

In the first six months of 2019, a Philipstown resident gave $100,000 to the Super PAC American Bridge 21st Century, which calls itself “the opposition research engine of the Democratic Party,” and another $15,500 to Democratic candidates and PACs.

Another Philipstown resident gave $60,900 to Democratic candidates, including $25,000 to a fundraising committee called the Nancy Pelosi Victory Fund ($21,500 went to the Democratic Congressional Campaign Committee (DCCC) and $3,500 to Pelosi, a California Democrat who is the speaker of the House).

In Garrison, the largest individual donor gave $27,150 to Democratic candidates, including $13,400 to Adam Schiff, a California representative who chairs the House Intelligence Committee, and his PAC.

In Beacon, by contrast, the two largest contributions were $1,200 to the DCCC and $1,000 to Rep. Sean Patrick Maloney, whose district includes the Highlands.

The largest contribution to a Republican candidate was $10,000 from a Garrison resident to the president’s Great America Super PAC. He also gave $1,000 to the re-election campaign of Lindsay Graham, the senator from South Carolina.

The chart below, which can be clicked to enlarge, includes candidates and PACS that received at least $75 in donations from Highlands residents in the first six months of 2019, according to the FEC. The number of donors is in parentheses following each total. 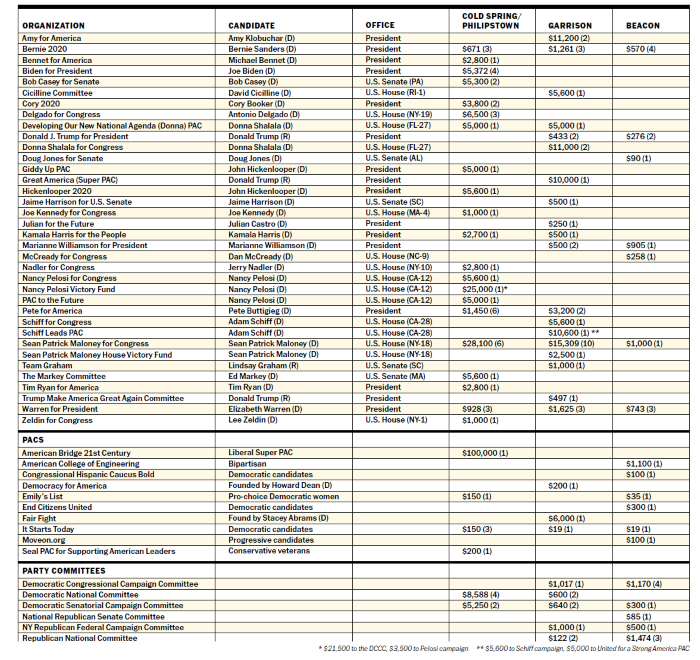 4 thoughts on “Whom Does the Highlands Support?”