Zachary Skinner’s art could save your life.

Not in the metaphorical sense, although the Beacon artist’s creations can provide a sense of hope and optimism even with the bleak prospects of climate change. No, Skinner’s art could save your life by providing water, light, and/or food.

“This one’s working right now,” says Skinner as he shows off a mixed-media piece in his show, Anthropocene Drifter, which continues at the Garrison Art Center through Sept. 15. The piece, “Camp Solar Generator,” is a rolling stand made of bamboo and other reclaimed materials propping up an array of solar panels and a 12-volt battery. 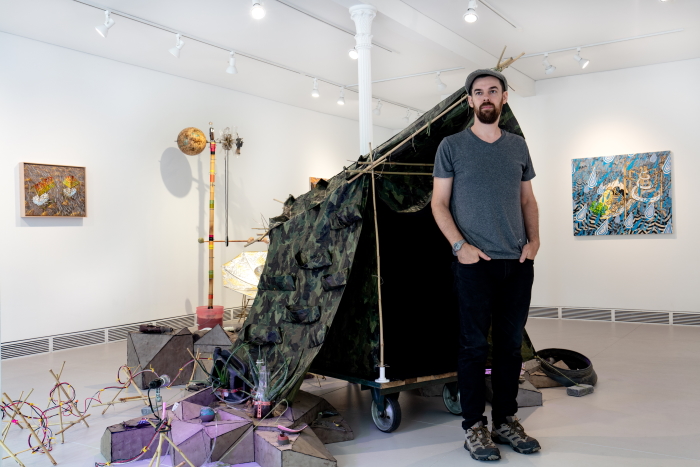 Should the art center spring a leak, “Rainwater Collector (Desert Pattern) with Rocky Stand)” will be handy. Half of the water is collected into a plastic soda bottle for drinking, and the other half is pushed via the solar-charged battery through long, slender tubes.

“I like to think of this as the umbilical cord of the exhibit,” Skinner explains, as he points out that the rainwater collector and solar generator are connected to a third piece, “Wisdom Tent with 2 Anthopocene Stones and Aloe Vera,” which uses the water to irrigate aloe vera plants in plastic watering cans. The battery also powers grow-lights.

Another piece, “Wind Driven Solar Cooker with Potatoes,” is exactly that. It’s draped in aluminum foil, which he notes is cheap and readily available and deflects more than 90 percent of solar radiation. “It has a functional aspect, but it’s also this joke of a windmill that spins potatoes over a solar cooker,” says Skinner. “One part joke, one part functional.”

For years, Skinner has been creating what he describes as “art activism” pieces but says his work is shifting to confront climate change. He was inspired a few years ago at a conference at the Massachusetts Institute of Technology that included a discussion of geo-engineering, or the idea that to save the planet we need large-scale projects such as flooding the atmosphere with aerosols to reduce the effect of greenhouse gasses or altering the salinity of the ocean to slow glacier melting. 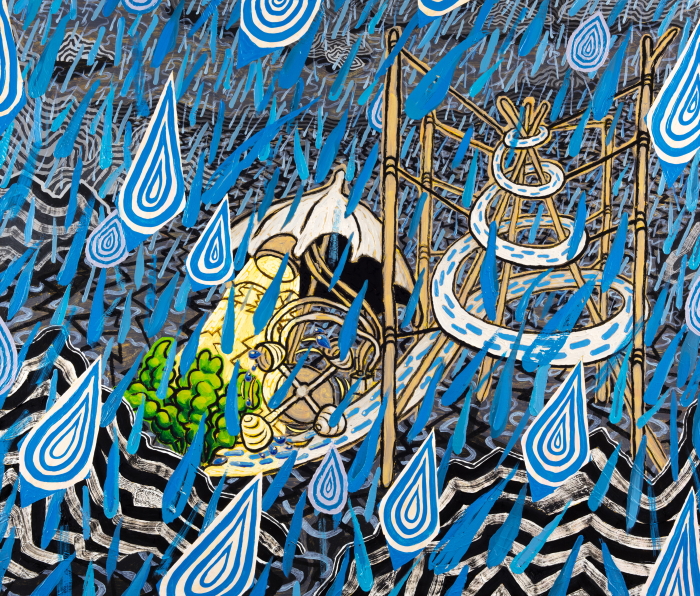 “Dry Riverbed with Rainwater Generator and Kale,” by Zac Skinner

Many of the scientists at the conference urged caution when discussing such massive global hacking projects, arguing that we don’t know if they’ll work, and if they don’t, we can’t hit the “undo” button. But support for the idea came from a surprising source: His Holiness the 14th Dalai Lama, who was in attendance.

“He spoke to our history of inaction, and said there’s no time,” recalls Skinner. “While it’s admirable that man sees nature as a pristine entity and wants to protect it, the sad truth is that we’ve already ruined the world. So why not fix it?”

Skinner says he isn’t sold on large-scale geo-engineering, but the Dalai Lama’s comments led him to think about smaller scale projects and to question how pristine the Hudson Valley is, despite its romantic landscapes.

“We’re in awe of the sunsets and the cascading mountainscapes, but I remember cleaning up the riverbanks and picking up trash and impacted behind it was more trash,” he says. “We’re walking on garbage but what we see is only beauty.”

Much of Skinner’s work is made of materials he’s collected from the river and its banks. He would like humanity to stop making plastic, but since there’s so much of it, and it’s not going anywhere soon, we might as well figure out what to do with it. The rain collector, for example, sits on a platform made of a huge hunk of plastic foam salvaged from the Hudson, and the spout is made of plastic Starbucks cups cut in half. 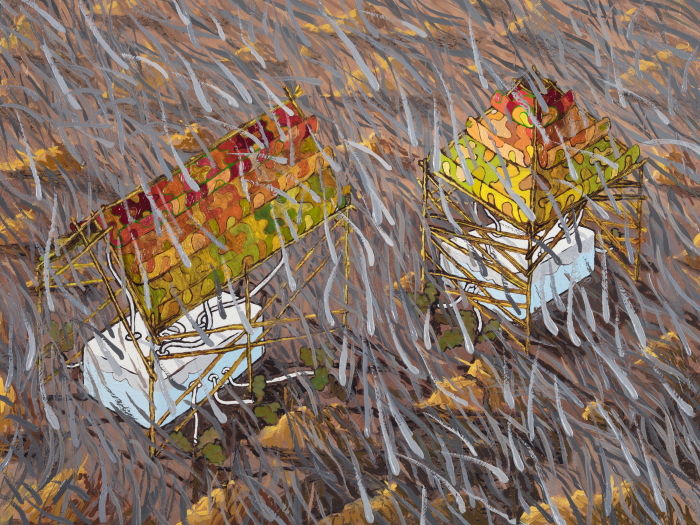 “Anthropocene Landscape with Rainwater Tents and Kale,” by Zac Skinner

It’s as a backyard tinkerer that Skinner says he feels empowered to create pieces that address climate change in practical ways. He says that much of his work is also inspired by camping, the last activity left where we temporarily declare ourselves stewards of a piece of land, take only what we need, and leave nothing behind.

But the humor in Skinner’s work is also important. “Sometimes we create a wall if we get caught up in the heaviness of these problems,” he explains. “Humor is a great tool to chip away at that wall, and make these issues a little bit more accessible. If we’re going to survive some of these serious problems, we need to lead with our creativity, optimism. It’s time to self-empower. Pick up that piece of garbage and make it into a solution.”