Muralist Joe Pimentel, when contemplating his assignment to cover a restroom building near the entrance to Memorial Park in Beacon with a mural, went with an animal theme — specifically, Hudson Valley wildlife, with a red-tailed hawk, coyote, owl, peregrine falcon, deer, rabbit, fox and black snake.

“I did the owl first, so when you’re driving down the hill, it’s looking right at you,” the artist said.

The commission came from the Wee Play Community Project, a nonprofit that provides advocacy and fundraises for Beacon’s parks and playgrounds. It asked Pimentel to design the mural, but it wanted the painting to be a community event. So, over two weeks that ended today (Aug. 23), a steady stream of children, teenagers and adults came to the park to paint. 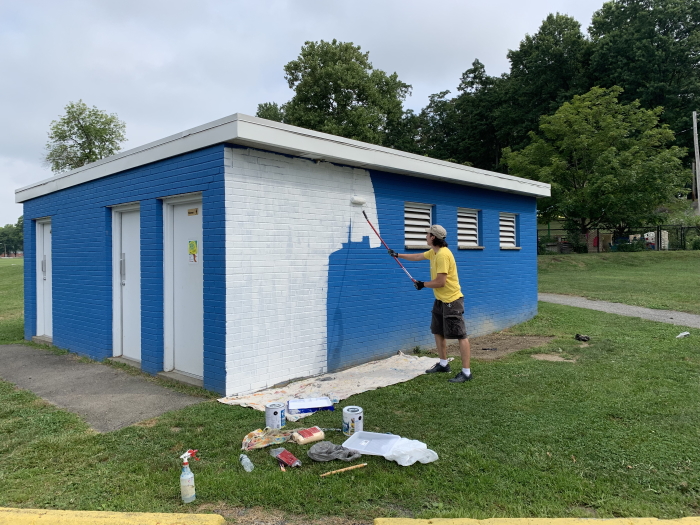 Pimentel applies an undercoat before outlining the mural. (Photo by Margaux Lange)

“When people get involved, they get invested,” said Margaux Lange, an artist who serves on the Wee Play board and managed the project with Pimentel. “Not only do they get to learn about public art, but murals in public spaces have been shown to discourage graffiti and reduce vandalism. Plus, we’re supporting a teaching artist and Joe is teaching technique.”

Wee Play funded the project with proceeds from its annual spring tag sale, and Brett’s Hardware in Beacon donated most of the paint and supplies. Wee Play created 400 sign-up slots of 30 minutes each for groups of four to eight painters, which filled quickly.

During the school year, Pimentel teaches in the Hudson Valley and Connecticut, collaborating with schools to create murals of 30 to 100 feet, typically for a week at a time. (He’s fully booked for 2019-20.) As at Memorial Park, Pimentel creates the outlines and handles the retouching, but the painting is done by students. 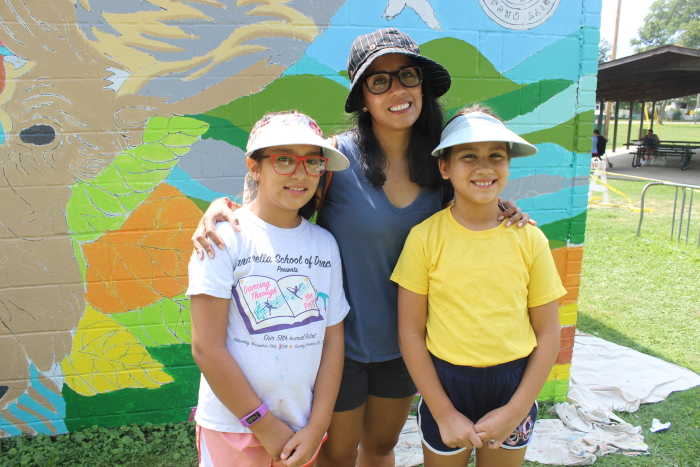 Antonia, Carmen and Augustina Finton, after finishing their second round of painting. Antonia, 10, painted parts of the coyote and clouds, while Augustina, 9, worked on sky and coyote. (Photo by A. Rooney)

His first mural was created in 2012 with Rick Price at the Tito Santana restaurant in Beacon. “Rick broke me into working on a large scale,” Pimentel recalls. “Once I got over that fear, I can’t picture anything smaller.” A school in Poughquag contacted him, then one in Titusville. By 2015 he was a full-time muralist.

Pimentel said the Memorial Park project was “a battle with the weather: shade, sun rain. But I enjoyed all of it, especially hearing the playground noises each day. The mural is an abstract version of nature, which echoes the transformation of Beacon itself. It’s in motion, but also the natural elements are still here.”

Wee Play will dedicate the mural and a playground donor sign at 4 p.m. on Sunday, Sept. 8. Next on the group’s wish list, Lange said, are additions to the playground such as rope bridges and climbing boulders.

One thought on “Painting the Town”