Each Monday afternoon, Nydia Dominguez’s two granddaughters begin pestering her about “seeing the hippies,” as she describes it.

The children are too young to tell time, so Dominguez must hold them off until 6 p.m., when they make a short drive from their home in Newburgh to the sidewalk beside a vacant commercial lot on Broadway that has been transformed into urban greenspace.

There, half a dozen volunteers from a year-old chapter of a group called Food Not Bombs gather weekly to distribute meals, groceries, and other donations, such as books, clothes, and sometimes — to the delight of Dominguez’s granddaughters — toys. 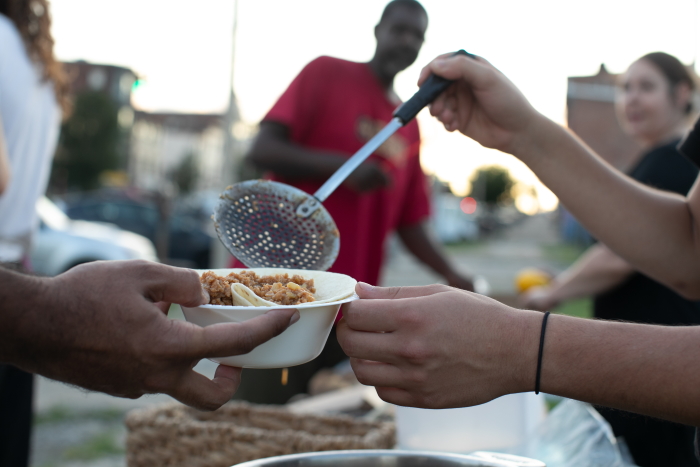 Volunteers from Food Not Bombs prepare meals each week in Newburgh. (Photo by Meredith Heuer)

Dominguez, who comes by the Food Not Bombs tables on most weeks, says she appreciates not only the meals and groceries but the sense of community it provides. She first spotted the group while driving by.

Food Not Bombs is a network of food-distribution groups that began in Boston in 1980 and now has hundreds of chapters worldwide. The Newburgh outlet began in May 2018 at The Moon on Liberty Street but moved outdoors when that community space closed. 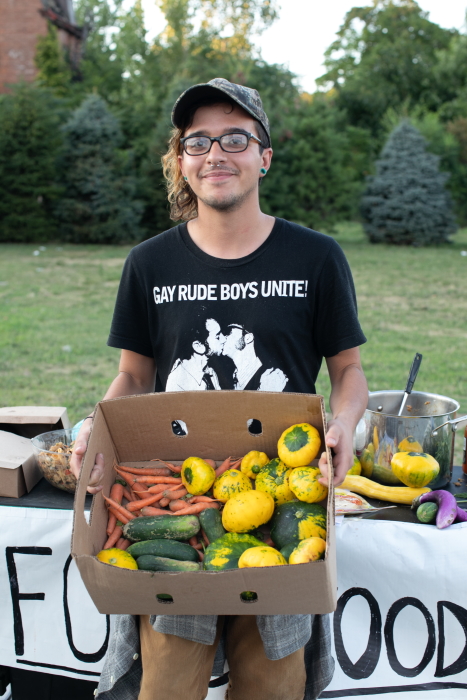 Rudy Tacos with a box of donated vegetables that Food Not Bombs distributes to Newburgh residents. (Photo by Meredith Heuer)

The name of the group comes from its founders’ desire to highlight that, if the U.S. military budget were redirected to feed people, hunger could be eliminated overnight. The meals are typically vegan or vegetarian and made from surplus food that restaurants or grocers would otherwise toss.

“A few friends and I had been talking about doing a Food Not Bombs-style thing here for a while,” explains a 25-year-old Newburgh resident who goes by the name Rudy Tacos and co-founded the chapter. “We knew how much good food goes to waste — we also saw our friends and neighbors making the choice between food and bills every month when their paychecks don’t go as far as they need to.”

Rudy and a few friends began retrieving surplus food that was safe for consumption but headed from businesses to landfills because the packaging was damaged or too much was ordered.

The group was able to obtain vegetables, fruits and grains and complement the donations with purchases of other ingredients to prepare vegan versions of dishes such as chili, macaroni-and-cheese and brownies. A handful of volunteers took turns collecting food, preparing and serving meals and cleaning up.

“We do not have a food-production problem in the U.S., we have a food-distribution problem,” argues Annmarie Nye, a co-owner of Binnacle Books in Beacon who volunteers with the Newburgh group. “People need to eat. There’s a ton of waste. Let’s share.”

Rudy says that the Newburgh volunteers have various political persuasions but that most would likely describe themselves as anarchists. “What we do is anarchism in practice, coming together and meeting a need in our community without a leadership structure — just you, your friends and neighbors.”

How Much is Wasted?

The U.S. Department of Agriculture estimates that 30 percent of edible food produced is thrown away by businesses and consumers — some 133 billion pounds — which the agency notes has “far-reaching impacts on food security, resource conservation and climate change.” Working with the Environmental Protection Agency, it has set a goal of reducing food waste by 50 percent by 2030.

A study published in 2017 in the Journal of the Academy of Nutrition and Dietetics estimated the food thrown away in the U.S. could feed 190 million adults.

After The Moon closed, the Newburgh volunteers relocated to the greenspace on Broadway across from the Orange County Social Services Department, using fold-out tables and reheating the meals with a propane camp stove. (The food is prepared and cooked elsewhere.) Rain and snow kept them home some weeks, but as the weather improved, so did turnout, Rudy says. 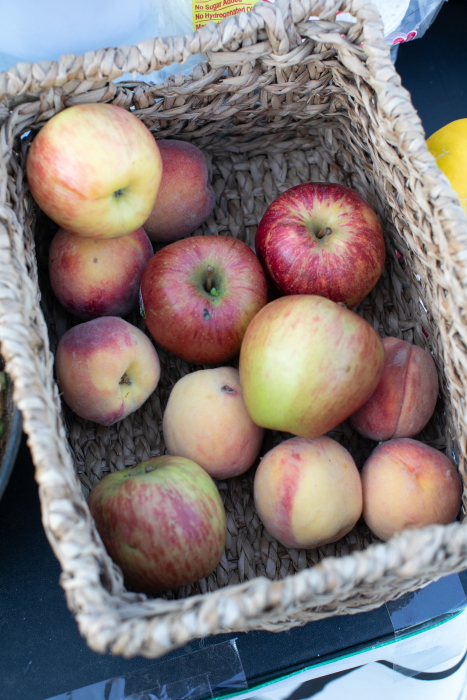 Following a year of outreach, the group is able to collect so much food that most of it is given to people to take home. The volunteers have also been scouring Craigslist for donated books, clothing, toys and other goods to redistribute.

“The momentum behind the group right now excites me,” Rudy says. “As we grow, we expand how much we can give away, spread the word more, and talk to people about the issues in our city — or just how their day is going.”