A hogshead of molasses owned by T.B. Truesdell exploded in the summer heat and its contents covered the alley leading to his grocery on West Street. 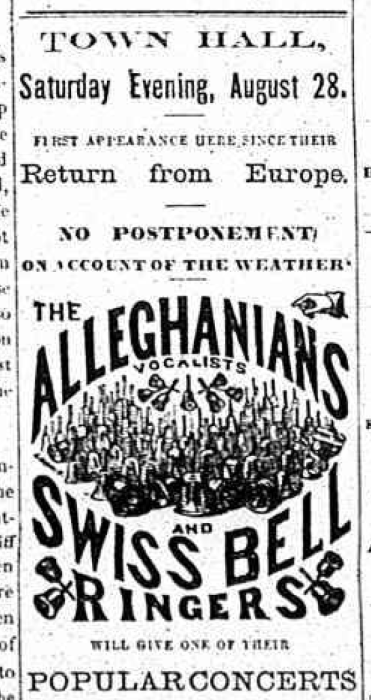 An advertisement for the Alleghanians’ Cold Spring concert in August 1869.

Many young ladies at Garrison’s complained they did not feel safe walking the promenades in the evenings because of rowdy Cold Spring boys.

The Alleghanians, a group of vocalists and Swiss bell ringers, performed on a Saturday night at Town Hall, although some audience members grumbled that the group lacked a first-class soprano.

The wife of Harry MeKeel was thrown from a wagon near Indian Brook and mortally injured when a braking strap broke.

Andrew Spaulding returned unexpectedly from Cuba, where he had been working on the cane crop, when his extra clothing, watch and horse were confiscated. Soon after, Hamilton Jaycox returned, as well, saying it had become too expensive to conduct business there because of unrest.

Poundmaster Leonard Schegel seized a flock of geese wandering on Garden Street, but released them when the owner complained.

Billings Spellman, the night watchman at the bridge near Fort Montgomery, was taking a train to his post when it failed to brake at his stop, so he walked to the rear car and jumped off. He was injured badly enough to miss a week of work.

The European Circus, complete with camels, passed through the village.

John Patterson traveled to California; it took 24 days by regular train but only seven to return aboard the Union Pacific, whose lines had been joined in May in Utah to create the first transcontinental route.

Hamilton Fish, a Garrison resident and the newly appointed secretary of State under President Ulysses Grant, visited Philipstown and Newburgh.

The Recorder noted three local men who had been injured, including one whose hands had been crushed by an iron plate at the West Point Foundry, would have no paychecks until they recovered.

Although storeowner R.E. Dalzell suspected his silver pocket watch had been lifted by a customer when he was making change, it was found the next day where he had dropped it in the cellar while getting butter from a firkin.

When the Misses Haldane rode to the post office on a pony to fetch the mail, the postmaster was overheard saying he would rather wait on a pony than some of the “saucy children” who accompanied their parents and, when told there was no mail for the family, demanded: “Why don’t you look?”

“Two picnics landed at Garrison’s and the persons comprising them were of the same stamp as the Staten Islanders who came here a while ago,” reported the Recorder. “They swarmed over Washburn & LeRoy’s Hotel, stole the landlord’s hat, cleaned the bar of cigars, for which they forgot to pay, and carried off the pickles from the dinner table. The only protection which a country place has against such a lawless horde is to forbid the steamboats to land.”

William Lawson scattered a group of boys who were taunting and stoning Joshua Hulse “in order to make him still more crazy and to hear the foul words to which his rage would give utterance,” the paper reported.

The home of Samuel Barrows on Main and Academy streets was burglarized overnight as the family slept; the thieves took a gold watch and chain as well as a leg of lamb being prepared for Sunday dinner.

A group of 40 Cold Spring families were angered by a paid “fishing excursion” that went awry. When the boat arrived, there were only 15 rooms and the passengers included a herd of bleating calves.

A Spanish military boat visited the Foundry wharf to test its fitness for a 100-pound Parrott gun.

After a 5-year-old boy, sitting on the edge of the gutter, was warned to move as the Foster boys backed up a load of furniture to the post office, he walked into the street and was struck by a horse but not seriously injured.

The old Presbyterian Church on Market Street hosted an exhibit of stereoscopic pictures enlarged and illuminated by a projector, although the paying audience was distracted by boys who peered in the windows.

A gang of tramps attempted to break into a car on a freight engine taking a water break at Breakneck, and the crew had to fire shots to drive them off. 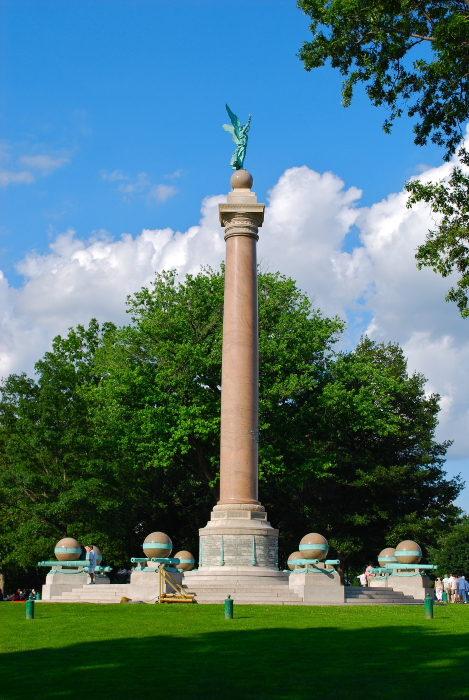 About 50 of the 273 voters in the annual election of the Haldane school district were women. [Women would not be able to vote in federal elections until 1920.]

West Point announced a new battle monument would bear bronze plates with the names of 2,000 privates and 5,000 officers killed during the War of the Rebellion.

A performing bear drew a crowd on Main Street on a Friday afternoon.

The Howard Stock Co. opened its fourth, weeklong annual visit to Town Hall with a band and orchestra, plays and a child actor and singer, Le Petit Shirley.

The state passed a law making school compulsory for children ages 8 to 14. Another new law required all laborers on public works to be U.S. citizens.

John O’Connell, as he was being arrested for disturbing the peace, threw a soda-water bottle at Officer McCaffrey, striking him in the knee.

George Brown, a resident of Cold Spring, was severely burned in the explosion of a gas tank in Watertown, Massachusetts.

Although poor weather prevented an inspection of Constitution Island, members of a state commission visited other possible sites in Cold Spring for a 100-acre villa that would provide homes for 250 to 300 families of veterans. Many soldiers’ homes did not admit women, and so married veterans would refuse to move in.

Lt. William Cooley, returning from the war in France, met his infant daughter for the first time at Twin Lakes and then traveled to Cold Spring to see his mother on High Street. He brought with him 25,000 copies of Cootie, the regimental paper of which he was editor. His next assignment was on the Mexican border.

Capt. Dale’s barns south of the village burned down when the fire equipment, hauled to the site by automobile, could not reach the village water supply. The superintendent’s home was also destroyed, but a hose connected to Dale’s Lake protected the chicken houses.

J. Bennet Southard, the Republican candidate for county judge and surrogate, and the incumbent, gathered enough signatures in the eastern part of the county to get his name on the Democratic primary ballot. [Southard, a Cold Spring native, had been elected judge in 1901 and would hold the position until his death in 1928.]

Gov. Al Smith commuted the sentence of S.A. Philadelphia, who had been convicted of manslaughter in 1912 and sent to Sing Sing for killing a man in Cold Spring.

After seeing a horse abused, the rector of St. Mary’s Church applied for and was named an agent for the American Society for the Prevention of Cruelty to Animals.

A group of veterans received a charter for a local post of the American Legion, which was named for the late Sgt. George Casey.

M.F. Smith noted that because his own ice had run out, he would need to get his supply from out of town, and so was adding 1 cent per pound to his prices.

The Town of Philipstown created two committees: one to present medals to soldiers returning from Europe, and the other to plan a memorial.

Looking for an Old Number?

Rose Story of Beacon allowed The Current to scan her copy of a phone book from 1945-46, The Dodge Directory, which includes listings for Cold Spring, Garrison, Putnam Valley, North Highlands, Manitou, Nelsonville and other communities. It can be viewed or downloaded at archive.org.

The chairman of the Putnam County War Price and Rationing Board said it asked the state for 60 automobile tires but was given 20.

Sgt. Hampton Scofield, a paratrooper who survived D-Day but was shot in both knees a week later by a sniper, was undergoing treatment on Staten Island. The parents of the 1937 Haldane grad lived in the North Highlands.

The Haldane school district reminded parents that, under a new regulation, they needed to present a birth certificate to register kindergarteners.

William LaDue, a lifelong Cold Spring resident, died at 70. Known as a bicycle competitor in his youth who competed at old Madison Square Garden, he operated the W.H. LaDue Sons lumberyard at the foot of Main Street.

The daughter of a Cold Spring couple was transferred from Butterfield Hospital to Reconstruction Hospital in Haverstraw with a slight case of polio. [The first vaccine was not available until 1955.] 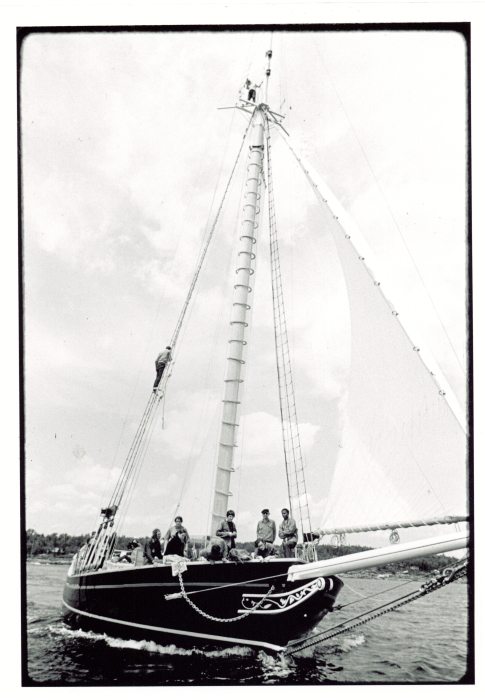 The Clearwater on a test run in 1969 (Photo courtesy A. Wallace Collection)

On Aug. 26, the sloop Clearwater made its first appearance in Cold Spring. A folk concert that evening drew 2,000 spectators.

As a fundraiser, the Philipstown Area Jaycees and the Cold Spring Lions Club played a game of softball while riding donkeys.

Two men from the Bronx drowned while attempting to swim to Bannerman’s Island, a distance of about 300 feet. A third man survived and drove the 3 miles to Cold Spring to alert the police.

About 1,000 homes and businesses lost power between Dutchess Junction and Westchester County after a tree fell on a power line in Beacon.

On the second day of the Garrison Art Center Fair, a willow tree branch fell on the display booths of potter Marilyn Price and stone etcher Daniel Brinkerhoff. There were no injuries. Price was able to push her customers outside when she heard the branch crack.