Every once in a while you run across a recipe that makes a lot of sense, and if it doesn’t require too much time in the kitchen — particularly in August — is worth a shot.

Such was the pasta-with-sweet-corn recipe presented by food writer Albert Stumm (with an assist from recipe developer Courtney Hill) last year in Milk Street Magazine loosely based on a 40-year-old favorite from an Italian restaurant in Providence, Rhode Island, called Al Forno.

Al Forno’s chef, Johanne Killeen, quickly blanches the corn, scrapes the kernels from the cob, and tosses them with just-cooked pappardelle and tomatoes, adding habanero pepper (?!?), cilantro (!?!) and a generous splash of olive oil.

Milk Street’s version ostensibly “improves” on that in a couple of ways.

First, the raw corn is grated from the cobs, creating a raw polenta-like mash, which is sauteed with a bit of minced shallot and a spare amount of habanero, which does add a surprising fruitiness and pleasant but not overwhelming heat. 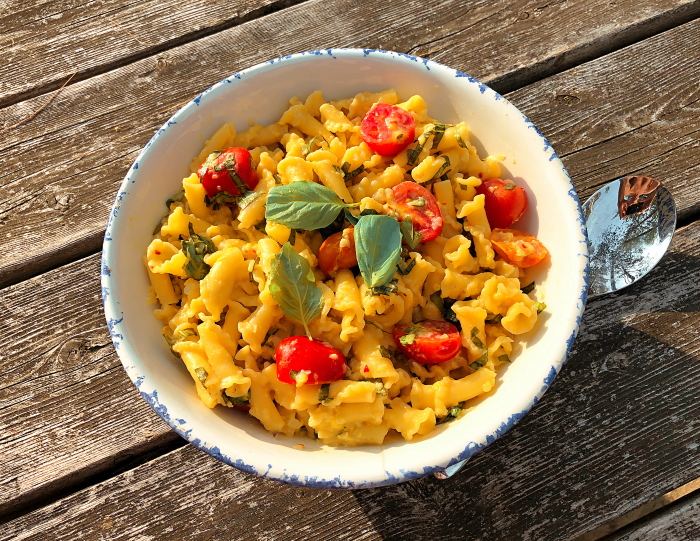 The resulting hot corn “sauce” is married to the warm-cooked pasta — in this case a frilly trumpet shape called campanelle (“bellflowers” or “little bells”), which are ideally suited to carrying the corn cream — over low heat with a splash of the pasta cooking water and a knob of butter. It’s then tossed with lightly-salted cherry tomatoes and chopped basil off heat.

This is a bit more complicated that corn on the cob and sliced tomatoes, but the alchemical results are a textbook example of the whole being greater than the sum of its parts. Basically dairy-free (with the exception of some butter, for which you could substitute olive oil), the dish doesn’t even ask for cheese, the starchy corn sauce as rich as any ragu.

After making the dish more than a few times — pretty much to universal surprise and satisfaction — I began to contemplate my own improvements. The major quarrel I had was with technique: grating the corn was too messy and took too much energy.

Borrowing from a Melissa Clark recipe for creamed corn, I upped the number of ears, cut the kernels from the cob and pulsed them in a food processor until nearly pureed, which drastically cut the prep time and mess. To really speed things up, add the peeled and roughly chopped shallots and the seeded, deveined habanero to the food processor bowl and chop before adding the corn.

About that habanero: don’t be afraid of the reputed heat. Seeding and deveining small peppers adds just a little heat, but the flavor is worth it. (Be careful seeding and chopping; wear prep gloves if necessary and do not go near your face or any other sensitive body area before thoroughly washing up.) You can substitute a comparatively milder jalapeno to diminished effect.

For the pasta, the Barilla brand campanelle is widely available, or the Sfoglini brand “trumpets” from Coxsackie (sfoglini.com) can be found at the Cold Spring General Store and occasionally at Fishkill Farms. You may, again to diminished effect, substitute short pastas such as penne rigate, fusilli, farfalle or Al Forno’s pappardelle.

As a firm believer in the dictum, “It’s never done ’til it’s overdone!” allow me to suggest a couple of other nonessential adaptations:

Joe Dizney is a designer, art director and unrepentant sensualist. When the Cold Spring resident is not thinking about food, he is foraging for, cooking or eating it. Email him at [email protected]