A Beacon neighbor with a ‘small is good’ vibe

Glenham is one of hundreds of hamlets, from Accord to Zoar, that dot the New York state map — small, unincorporated settlements with unmarked boundaries and often nebulous identities.

Residents of Glenham would likely argue their identity is anything but vague. They clearly see their hamlet, nestled up against Beacon’s eastern boundary, as a good place to live and do business, more akin to a neighborhood than a village or town.

In the hierarchy of communities, hamlets are an enigma. 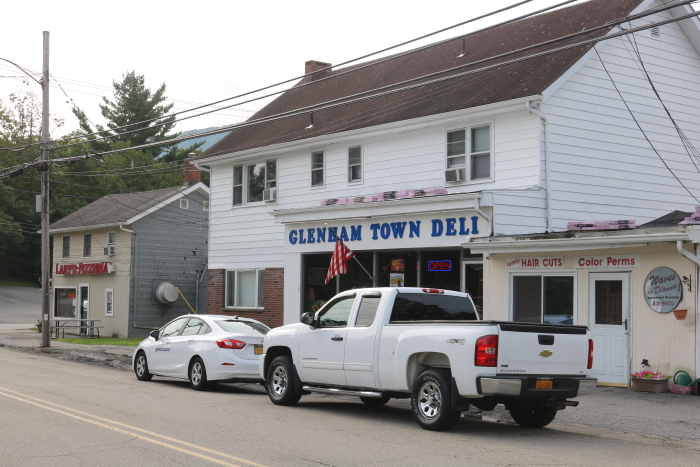 But you will find a post office, complete with its own ZIP code (12527), a fire department and a small collection of commercial and institutional buildings at the corner of Old Glenham Road and Maple Street that might loosely be considered “downtown.”

Although Glenham is part of the Town of Fishkill, which provides most of its municipal services, its students are in the Beacon City School District. Why? Because school district boundaries and municipal boundaries don’t always coincide. Glenham had its own district until the 1960s, when it merged with Beacon.

The hamlet’s exact population is a bit of a mystery, which is not surprising since there are no signs to indicate where it begins or ends. Mail is delivered to about 100 houses, but there are about 500 post office boxes. If Glenham reflects the U.S. national average of 2.5 people per household, its population is roughly 1,500.

Phyllis Malon has worked at the Glenham Town Deli for 20 years. “This is a community of nice people,” she said. “I feel I know the whole town, and everybody knows me.” 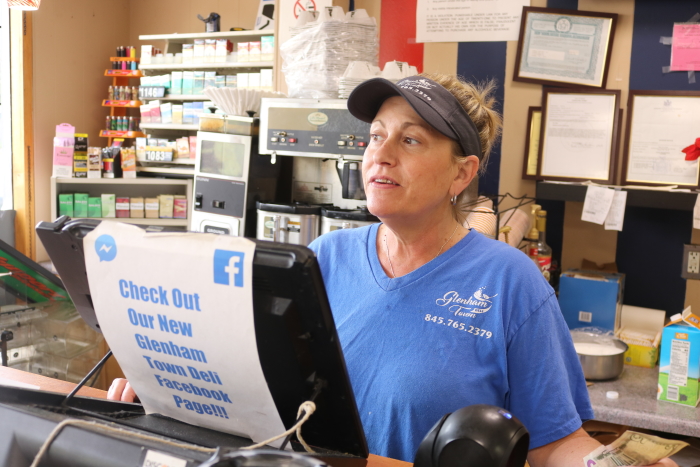 A colleague behind the counter, James Allieri, 22, grew up in Glenham and also likes its diminutive nature. “It’s a tiny place, quiet, not much traffic,” he said.

The Slater Chemical Fire Co. sits across from the deli. Established in 1921, it was named for Private Jesse E. Slater, the only Glenham resident killed in World War I. Chemical was added to the name after Texaco donated a Ford Model T fire engine that used chemical foam. The historic vehicle is still seen in local parades.

The firehouse is also a community meeting place. On Sept. 21, it will host the hamlet’s biggest annual event, Slaterpalooza, a day of music and food that is the company’s main fundraiser. 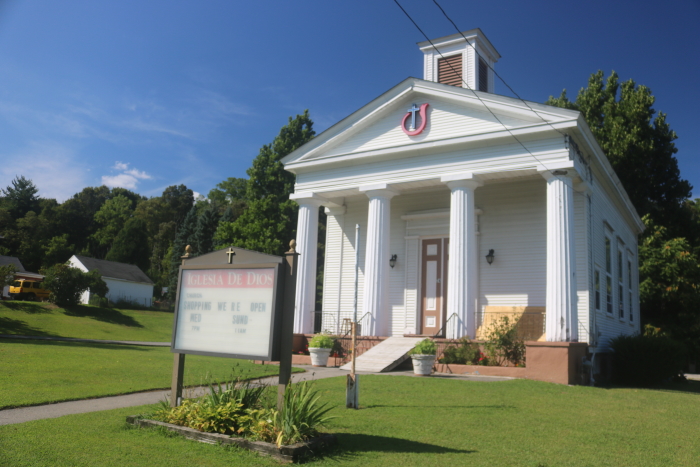 Dave Dross, 50, a lifelong resident, is the fire chief. So was his father. His son and daughter also serve in the company. Multiple generation families are not uncommon among its 55 active members, he said.

Adjacent to the firehouse, Iglesia De Dios (Church of God), opens its doors on Wednesday evenings and Sunday mornings.

Like the firehouse, Waves by Dianna, the hair salon next to the deli, is a meeting place. “They call my shop the Steel Magnolias of Glenham,” said Dianna Chirico-Vacca, its owner for 29 years, citing the 1989 film set in a local salon. “I have people who don’t even get their hair done. They just come in and talk!” 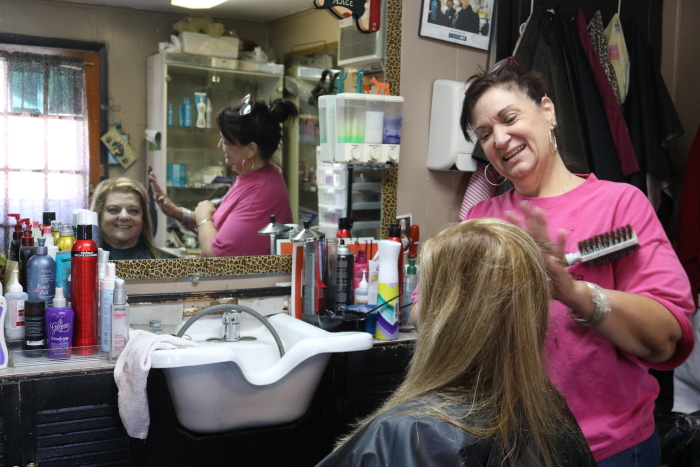 Dianna Chirico-Vacca with a customer at her Glenham salon (Photo by M. Turton)

The future is uncertain for the largest tract in the hamlet, where Texaco had its Beacon Laboratories. Fishkill Creek divides a 153-acre parcel that, beginning in 1811, was the site of a wool and saw mill. During the Civil War it churned out blue tunics for the Union Army before going out of business in 1929.

Texaco purchased the property in 1931. During its 72-year run, the oil-and-gas research center patented hundreds of products developed on-site. At its peak it employed 1,300 people.

Steve Van Buren, who grew up in Glenham, recalled the fleet of test cars that ran 24 hours a day. “They were identical cars that traveled in caravans, using I-84 as their testing grounds,” he said. 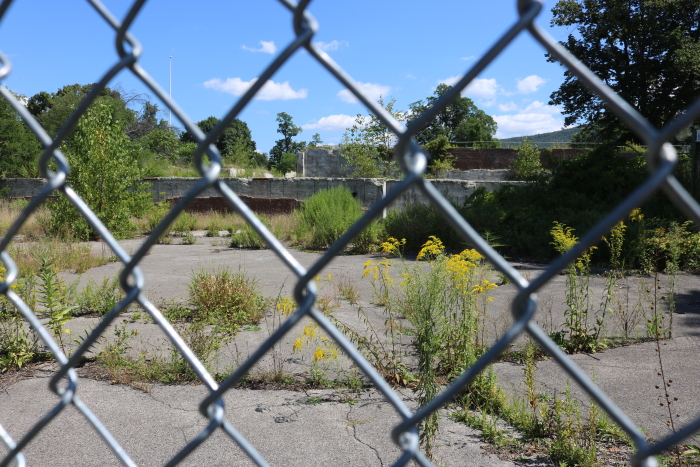 Texaco closed its Glenham facility in 2003. (Photo by M. Turton)

Texaco’s research operations moved to Beacon in 1956, and in 2003, after the company merged with Chevron, the Glenham facility closed. Most of its many buildings have since been bulldozed.

A community panel has been meeting with Chevron since 2011 over the environmental cleanup of the site, now known as Glenham Mills, and possible future uses.

“Chevron doesn’t seem to be moving forward with any development plans, and until the site cleanup is complete its future will remain on hold,” said Bob LaColla, who is the Town of Fishkill supervisor. “Whatever is decided, there will have to be community buy in.” 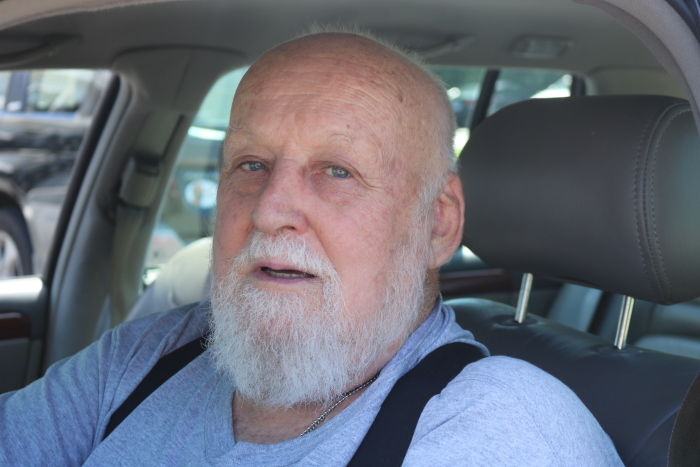 Chubb Baxter, whose grandfather worked at Texaco from the beginning, has lived in Glenham for 40 years. “They want to put restaurants, houses and apartments along the creek,” he said. “But people here don’t want that.”

Dross, the fire chief, said the community is split between wanting development and leaving the Texaco site as open space. He noted if it is developed, the increased tax revenue would benefit the fire district. (It also could bring more families to the area, which would impact Beacon’s schools.)

It’s a big issue for a community so comfortable with its smallness. The most recent meeting of the advisory panel was scheduled for Thursday (Aug. 29) at the firehouse.

5 thoughts on “Welcome to Glenham”