Attendance at meetings of the Cold Spring Village Board can often be tallied on the thumbs of two hands, but on Tuesday (Sept. 17), residents packed the firehouse on Main Street for a meeting called by the Village Board to discuss regulating the growing number of short-term rentals.

The Nelsonville Village Board also discussed the issue at its Sept. 16 meeting.

Cold Spring Mayor Dave Merandy noted at the outset that the issue, which has been fueled by the growth of online booking services such as Airbnb, “is being addressed nationwide, if not globally.” He said the discussion has come to a head in Cold Spring because of complaints from residents who live next to homes being rented to overnight visitors.

Michelle McCoy, who complained to the village in June about an Airbnb operating next to her family’s home on Mountain Avenue, voiced a sentiment at the meeting that was common among many speakers. She said she doesn’t want to see a ban on short-term rentals “but like all businesses, including hotels and inns, there needs to be regulations.” 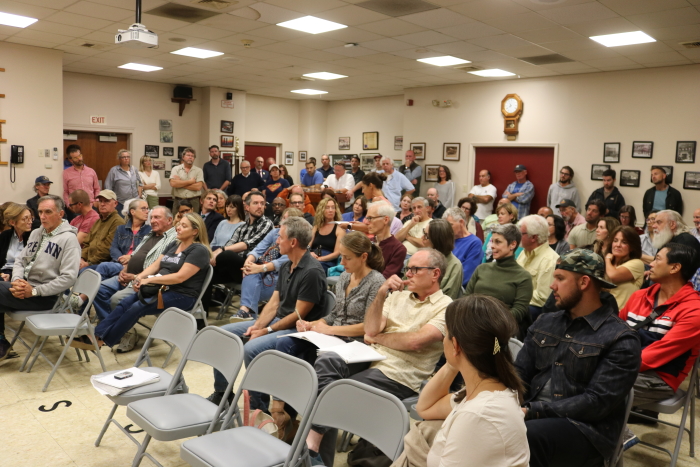 There was a full house at a meeting called to discuss regulation of short-term rentals. (Photo by M. Turton)

McCoy said the Airbnb listing for 27 Mountain Ave. describes the property as “perfect for large mellow groups” of up to 12 guests, and includes four air mattresses on the floor among the available beds.

“This high level of occupancy is dangerous and detrimental to the house and neighborhood,” she said. “I don’t think it is safe.”

Merandy has said at previous meetings that most problems seem to arise from large groups, and that a law limiting the number of guests would mitigate that.

Lorelei Bardes, who operates an Airbnb on Bank Street with her husband, agreed with the mayor’s assessment. “We haven’t had any problems, and I think it’s because we’ve limited it to two guests” at a time, she said. “A two-bedroom house should not be rented to more than four people.”

Phil Heffernan, who operates an Airbnb on Church Street, said that while short-term rentals pose “a lot of gray areas,” they are “a cherry pie that fell from the sky.” He described the economic benefits to people struggling to stay in their homes after retirement as “phenomenal.”

Heffernan said fears surrounding Airbnbs are unrealistic. “There are a couple rogue estates, people who say: ‘Let me jam 16 people in a four-bedroom house,’ and that’s not right,” he said.

Only one of more than 20 people who spoke at the meeting felt no short-term rentals should be allowed, asserting they are too disruptive. “It’s not what this village is supposed to be about,” said Dave Divico. “Just because you can make money, because there’s demand, doesn’t mean it’s right.”

Along with imposing other requirements, currently the village code demands that owners pay $500 and apply for a special-use permit before renting rooms in a “tourist home.”

The village’s Code Update Committee is close to completing revisions that include replacing the term “tourist homes” with “short-term rentals.” The draft recommendations include requiring owners to be on-site, provide off-street parking, have proof of insurance and conduct annual fire inspections. It also would limit rental rooms to three and ban cooking facilities in rental units.

Tara Carroll was one of a number of Airbnb hosts in attendance who disagreed with some of the proposed restrictions. Carroll and her husband offer short-term rentals above Barber & Brew, their Main Street business.

“Requiring an owner to be on the property would eliminate a lot of Airbnbs,” she said. Carroll suggested requiring operators to be licensed and inspected would provide recourse for any problems.

She also opposed the proposed off-street parking requirement, pointing out that many Main Street apartments have no parking.

In addition, Carroll said weekend renters expect to be able to cook. “You should be able to use a stove,” she said, adding that fire inspections would mitigate that issue.

Others were supportive of restrictions.

Irene Pieza said she lives on Paulding Avenue, next to an Airbnb. “I’m not against short-term rentals,” she said. “But if the homeowner is not present to manage their property it falls to the neighbors.” She said owners need to manage relationships with their neighbors, describing having to call the police over noise complaints as “ridiculous.” The police, she said, “are not property managers.”

Marion Avenue resident Peter Henderson agreed there are problems when owners are not there. He said until recently his neighbor vacated on weekends, renting to large groups who would “block driveways and create noise during the day and night.” Having owners present, along with enforcement, he said, is key.

Marianne Sutton went further. The Boulevard resident said there are European ski villages that have become “ghost towns” because of the proliferation of seasonal short-term rentals owned by “nobodies” who don’t reside there. The challenge for Cold Spring, she said, is differentiating “between speculators who buy up properties to rent out and normal people trying to make extra income.”

An Airbnb map showing current listings on the site in the village.

Village resident Kathleen Foley suggested an approach that might help Cold Spring deal with absentee owners. Foley owns a rental property in Ithaca and, because she lives more than two hours away, is required to have an agent available within 30 minutes if problems arise.

When someone commented that short-term rentals in residential areas zoned R-1 are illegal, except those on state Routes 9D and 301, Deputy Mayor Marie Early described how the illegal operations could have complied with the law.

“You can apply for a variance,” she said, adding no one has ever done so. “What has been inhibiting you?” she asked the hosts in attendance.

“I don’t think anyone knew,” someone replied.

As the meeting concluded, Merandy said he feels the issues can be mitigated. “We will digest this for a bit, but we can come up with sound regulations.”

The mayor encouraged residents to send written comments regarding rentals to the village clerk. He also suggested looking at policies developed in communities such as Cornwall, Rhinebeck and Lake Placid.

Tuesday’s meeting may have set the standard for polite public discourse, with one attendee describing it as “an avalanche of civility.”

On the eve of Cold Spring’s public forum on Airbnb, the Village Board in neighboring Nelsonville resumed its own discussion of the issue.

“We should maybe get involved with what Cold Spring is doing about Airbnb,” a resident, Mary Lou Caccetta, proposed. “I’m not a fan of some of the stuff Cold Spring does, so I don’t want to become like Cold Spring. But I think it would be beneficial if we worked together, because if we don’t do anything and Cold Spring does, they’re going to all just come up here.”

Mayor Michael Bowman assured audience members that the board wants regulations “to make sure we’re not the dumping ground for Airbnb.” In Cold Spring, he asserted, “there’s entire neighborhoods being bought up, house by house and made, basically, into hotels.”

Residents expressed fears of neighbors being forced out of homes converted from long-term rentals to Airbnbs and of the possibility that short-term renters won’t be contributing members of the community. At the same time, a resident suggested, the village could earn revenue from short-term rental permits.

Bowman acknowledged that some homeowners use short-term rentals to earn “supplemental income to help pay their taxes. We’re not looking to ban it in any way, just to regulate it and make sure it’s done correctly.”

Peggy Clements, a Nelsonville resident, noted the village has a law on short-term rentals that is not being enforced. The code allows “the letting of rooms” to up to two guests at a time as long as the owner lives in the house. It prohibits cooking facilities in guest rooms, although an owner can offer breakfast or other “board” and allow guest access to the home’s kitchen.

Bowman and Trustee Dove Pedlosky said the law needs to be revised to make it easier to enforce.

One thought on “No Vacancy at Airbnb Meeting”