The push-and-pull of togetherness and uncoupling — literally, emotionally, symbolically — is represented in Samantha Palmeri’s paintings in The Things Between Us, through Sept. 29 at the Catalyst Gallery in Beacon. 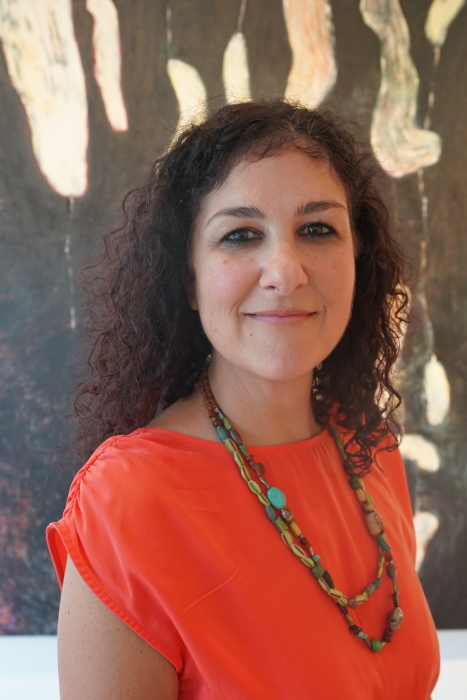 The nine paintings, along with a series of drawings in the back room, are all recent works, painted with the space in mind, she says.

Although the paintings appear to be parts of a whole, they weren’t formulated that way. “It starts by just doing work, piecing it together in my head as I go,” she says. “I had a few half-painted ones, and I started looking at them all together and making changes such as altering the background color to flow from another painting. It became very much a complete body of work.”

Palmeri says she begins with observation. “I’m usually looking at something or a variety of things that are already abstract, like tree branches connected in a certain way, body parts, piles of laundry, piles of garbage,” she explains. “I may look at the shapes on my other canvasses and repeat things I like. Pretty much all work is in square, because I’m circular, organic. The only straight edge is the edge of the canvas.”

Earlier in her artistic life, she marked out shapes before adding other components. Now, she says, “it’s all happening at the same time: background, foreground, color and line. It’s a continual process of push-and-pull. Sometimes I scrape a whole lot off, but there’s still a layer left.

“I use a lot of different tools, not just paintbrushes: a burnishing tool, toothbrushes, oil sticks, charcoal,” she says. “If you examine them close-up, you can see the textures. I want someone looking at a painting to be able to ‘re-read it,’ to see new things when they look again. You know that something is going on, but you’re not sure what it is, so you want to look at it more.” 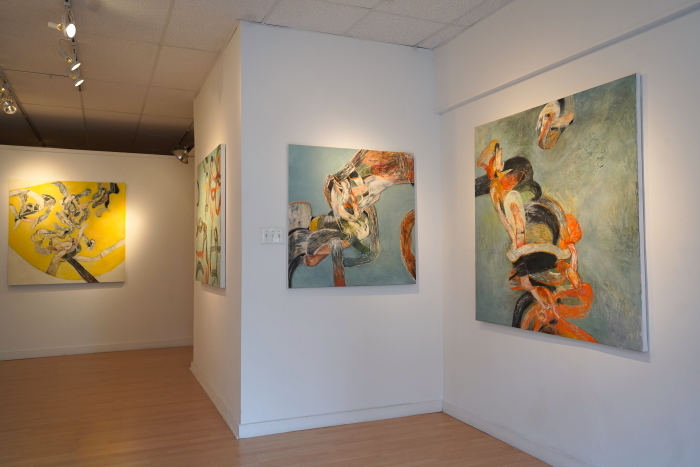 A native of Staten Island, Palmeri describes herself as the kid who was always “off in a corner, coloring.” She wanted to be a dancer, and “the movement of your body and expressing it that way is my first love. It hasn’t left me; it’s in my work.” She adds that most of the initial sketches for her drawings were done while she watched videos of modern dance.

Palmeri, who attended the School for Visual Arts and has owned two art galleries, moved to Beacon five years ago. A year later, she began as director of Beacon Open Studios, a position she held until 2018.

She had a studio in the old Beacon High School building but now works at home. “I can spend more time there,” she says of her new studio. “With this kind of work, there’s a lot of looking that needs to happen. It’s important just to sit there.”

Catalyst Gallery, at 137 Main St., is open from noon to 6 p.m. weekends or by appointment.