“Overall, I’m happy with the results,” said Coach Craig Canavan. “We played some good soccer throughout both games.” The Blue Devils will host Pawling on Saturday, Sept. 21, at 11 a.m. for homecoming.

The girls have only three of 11 starters returning from last season, but senior JoAnna Galbo and junior Kelly Murphy are 5-1 at first doubles. Sophomore Maura Lane is 4-2 at No. 1 singles; freshmen Isabelle Ray and Farah Jaafar are No. 2 and No. 3. The junior varsity team, which was relaunched this year, got its first win in many years this week against Eastchester. 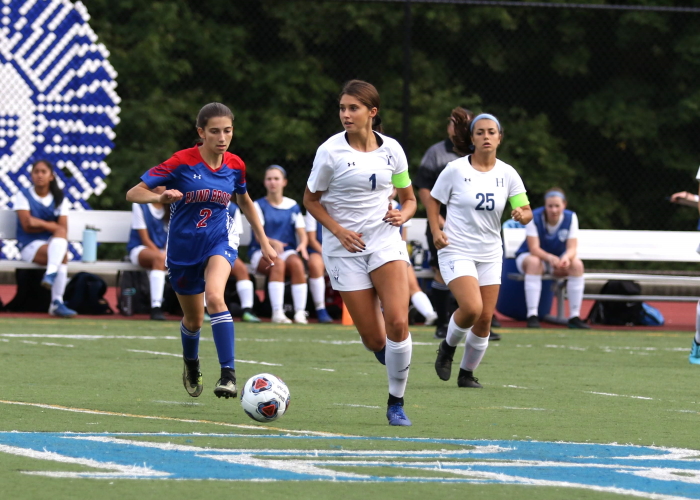 Senior Jade Villella (1) has scored in each game for Haldane this season. The Blue Devils are 3-0-2. (Photo by Scott Warren)

“We had one defensive lapse at the end of the game, and it cost us,” said Coach Steve Schweikhart. “The girls responded well and actually had the better chances in the two overtime periods. Liv Villella had a fantastic game at center back, and her sister’s goal was just a beautiful individual effort. Bela Monteleone did a nice job for us at the center midfield position.”

Beacon fell to Pearl River and Brewster but defeated Yonkers, 1-0. Haldane will host Beacon at 1:30 p.m. on Saturday, Sept. 21,  for homecoming.

Haldane improved to 6-2 with dominant wins over Palisade Prep, Woodlands and Tuckahoe. Beacon fell to Byram Hills, 3-2, but defeated Brewster, 3-2.

Haldane will host John Jay at 9 a.m. on Saturday, Sept. 21, for homecoming.