Cari Swanson is everything horses. She trains, boards, rescues, rehabilitates and sells them on her 63-acre farm near Amenia, northeast of Poughkeepsie. She also teaches riding, provides horses for films, television, videos and fashion shoots and coaches actors on how to look good in the saddle.

Who’s easier to work with — horses or movie stars?
Horses, though I’ve had wonderful luck with actors. Russell Crowe is known for being difficult but was great to work with. Dan Stevens [of Legion] was amazing. My approach is, “I’m here to make you look good.” Ethan Hawke was terrified but I showed him how to connect with the horse, and he was hooked. Many actors are dancers and singers; they understand rhythm and balance, and that’s all riding is.

What other roles do you play on set?

In the HBO series The Nick, set in the early 1900s, I put together a team of horses, carriages and people and ran that department. I supplied four white horses for the movie Winter’s Tale. In Orange Is the New Black, I played an Amish girl driving a carriage. And I just did a music video with Beyoncé and Shatta Wale. I’ve also done video displays for Ralph Lauren and fashion shoots that require horses. 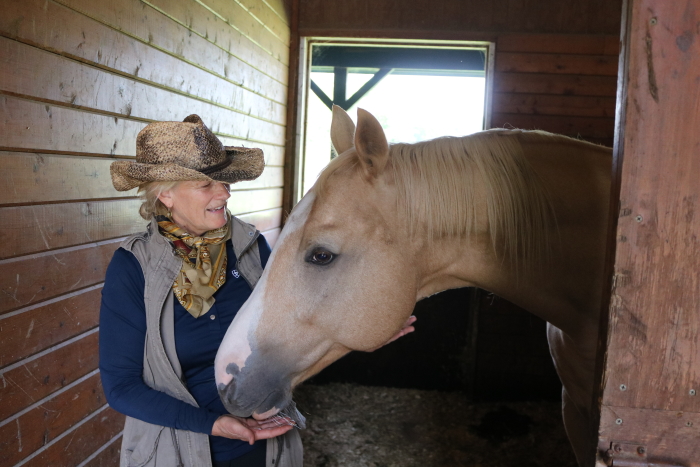 Why do you love these animals so deeply?
It’s in my blood; I think it’s partly genetic. I grew up on a farm, was on a horse by one or two. My grandparents, mother, aunt and siblings loved horses. At 16, my mother let me drive the truck, trailer, my sister and two horses to shows, including jumping. I had a thoroughbred quarter horse, Most Happy Fella, all through high school and college. When I came back to New York he came up here. He died at age 36. He was my best friend. It’s so intuitive. I’ve probably been involved with horses in many lifetimes.

Why do you bring horses into your kitchen?
It’s training for TV and movie sets. I put my horses in every situation I can think of, including an obstacle course that emulates a set. Asking them to come in the house teaches them to trust me in new situations. The environment — the flooring, people, echoes and sounds — are different. It pays off. I did a TV commercial with Lily on the tiniest set I’ve ever seen, with camera equipment, lights and screens. Thank God she was used to being in small spaces. 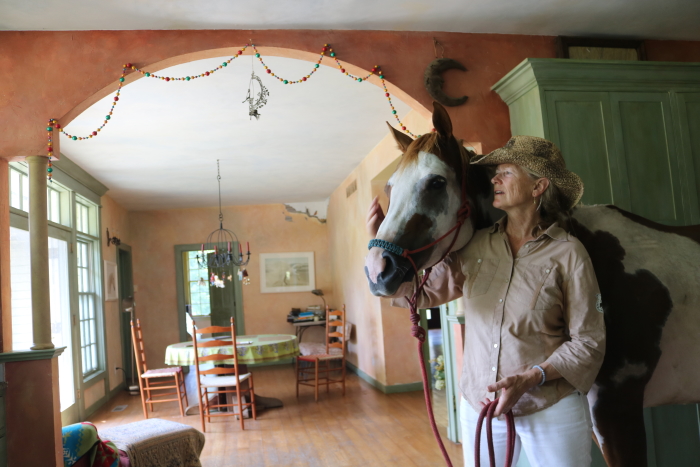 Cari Swanson with Lily in her kitchen; she brings the horses inside to get them used to being on movie sets. (Photo by M. Turton)

What kind of horse is most challenging to train?
One that’s been mistreated. It’s so hard to regain their trust, and even if you do, it will not transfer to everybody.

Having “horse sense” implies intelligence; are horses smart?
They’re not going to solve physics problems but they’re highly intelligent about reading emotions, energy and are always aware of their environment. They observe constantly and have an incredible memory. If you make a mistake, they remember, and it takes forever to overcome. If you load a horse, are not careful and he bumps his hip, you now have a horse that won’t go in a trailer. I correct that in the horse — and then in the owner.

Is there such a thing as a horse whisperer?
I have a talent for observing a horse, its eyes, ears, skin, tail, feet and head position. I try to teach that skill. I train from intuition and kindness, constantly reading the horse. You can’t be intuitive unless you’re aware. Some people will never get there because they’re so rigid in their thinking. 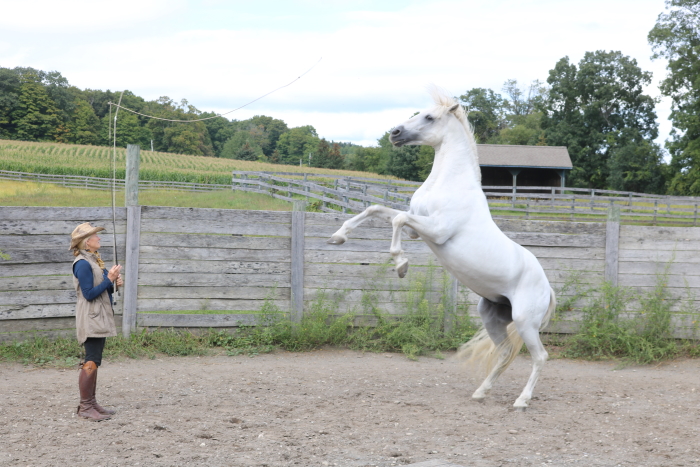 Is it easy to teach people to ride?
I love working with children because they’re so open and fresh, no preconceived ideas or fear. A lot of people are drawn to the mystery, excitement and magic of being on a horse, of feeling so powerful. Some people can’t connect because they don’t know how to read their horse.

How do you reward or punish a horse?
The biggest reward is taking the pressure off. It’s always take and give. You start super soft. Then a little harder. It’s not grab and hold — they’re bigger than us! You pat them, reassure them; your voice is calming. One sharp correction is invaluable — possibly both verbal and a crack of the whip. It isn’t valuable to just tap-tap-tap because you’re training them to ignore you. Their face is off limits, but if they’re biting, I’ll crack them under the chin; it’s more the action and timing than the force of the blow. They’re smart; they won’t go somewhere they’re going to get hurt. Horses intuitively want to rest. So, if they’re not cooperating you move their feet, do figure eights. Get them to move their feet and you can get them to connect with you.

What misconceptions do people have about horses?
People try to give horses human traits, but they are animals that were once wild. I get problem horses because people don’t treat them like a horse. You need boundaries. A herd has a hierarchy. You have to be the leader of the herd, strong in position and posture as much as in action, or the horse takes over.

One thought on “Dutchess Trainer Has Horse Sense”