The editor of The Cold Spring Recorder expressed astonishment that Henry Jaycox had grafted a tomato to a potato plant to create a hybrid that grew both.

George Livingston was arrested on charges of breaking a street lantern owned by J.H. Perry but released after he insisted it was an accident. However, boys with stones broke the lanterns at the old Presbyterian Lecture room on Fair Street and at the entrance of the Methodist church.

The circus scheduled for the baseball grounds near Foundry pond did not take place “on account of the failure of the company to get here,” the Recorder reported.

The parents of Harry Melver, a teenager from Cold Spring, sounded the alarm when they awoke and found him gone. That afternoon, he returned home, saying he had been sleepwalking and had awoken at 4 a.m. in Peekskill.

Alex Tremble, who lived on Kemble, startled his neighbors when he shot at a man he said was prowling about his home. “A married woman, whose husband is at work in New York, appears to be strangely mixed up in the affair,” the Recorder observed.

A group of boys was accused of taunting George Candee, who was in a charge of a sloop docked at Sandy Landing, by throwing stones at the boat until Candee, “who was much improved in health … was half crazy again,” the paper reported.

Gussie Myers, the daughter of Jacob Myers, was run over by a wagon on Main Street but escaped serious injury because the wagon was empty and the mud was deep.

The Recorder encouraged readers to board the train with tickets in hand to counter the reputation of Cold Spring “dead beats” who hang up their hats, rumple their hair and take up a newspaper to appear like they have traveled a long distance to avoid the fare on short trips.

The paper noted with dismay several of the “many slights which we have received from our eastern neighbors.” First, a grand jury drawn in Carmel did not have a single man from Philipstown, despite the town having a third of the county’s residents. Second, a $50 prize was awarded at the annual agricultural fair for the fastest pair of road horses, when it was well-known that few people in Philipstown had more than one.

A drunken man lay for three hours by the road below Mrs. Haldane’s near the railroad on a Saturday afternoon before being arrested.

Engineers from West Point moved slowly along the steep sides of Storm King about 50 feet above the Hudson to survey a possible wagon road to Cornwall.

J.H. Perry excavated his lot below the railroad track to create a trout pond from the spring that provides the engines with water.

J.E. Dore was driving down Main Street when an axle bolt broke, sending the weight of the load onto the horse, yet the animal stopped on command.

Michael Hoy, of Market Street, while drunk on whiskey, beat his wife so severely that he might have killed her but for the intervention of neighbors.

A small box with rare coins, jewelry and keepsakes stolen from the porch of Patrick O’Donnel was found empty in the Hudson by boys catching crabs.

Mrs. Daniel O’Neil, of Kemble Avenue, when her husband was absent, spotted someone trying to raise the window of her room. Patrick Murry, who lives in the house, chased two culprits from the yard.

Thomas Skeene, the gardener to Hamilton Fish, reported he grew a potato that weighed 1 pound and 7 ounces.

Squire Ferris informed two men arrested for disorderly conduct that they would be considered not drunk if they got on the first train out of town, which they did.

The Army announced it would pay only $10 for the capture of deserters from West Point, down from $30. 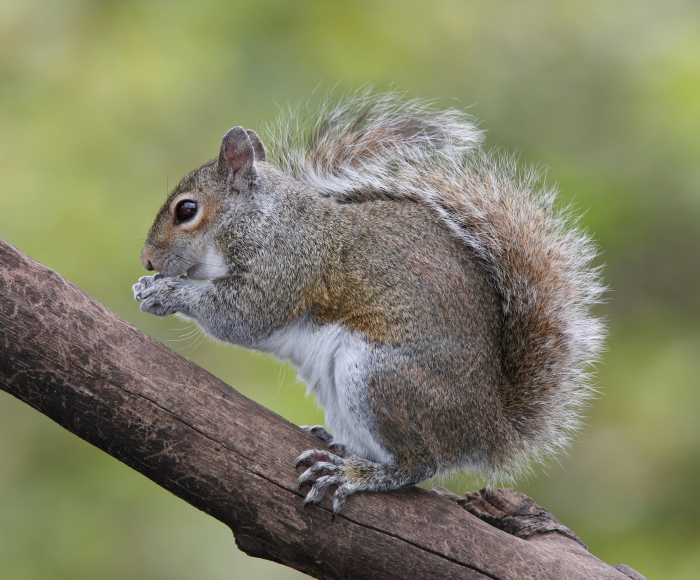 The state Game Committee announced it would recommend the state ban “jacking” for deer (shooting at night while using a torch or lantern).

The gray squirrel hunting season opened Sept. 1. [The season remains the same in 2019: gray, black and fox squirrels can be killed from Sept. 1 to Feb. 29, with a daily limit of six. Red squirrels can be hunted anytime.]

A bicyclist carrying a letter from Chicago to New York City passed through Cold Spring during a demonstration that bikes could be effective for mail delivery.

Residents of Fair, Garden and Church complained that motorcyclists made a practice on Sunday mornings of using the streets to test their machines.

A reception was held at the Manitou school to welcome the final three local doughboys returning from France.

The Cold Spring Village Board granted James DuBois of Orchard Street and Alfred Smith of Garden Street permission to place bridges across the gutters in front of their homes to reach the street.

It was rumored that a town football team was being organized.

The 34th annual convention of the Putnam County chapter of the Woman’s Christian Temperance Union was held at Carmel. Although it was founded to reform drunkards and close saloons, by 1919 it was focused on child welfare, the rights of working women and banning alcohol worldwide. 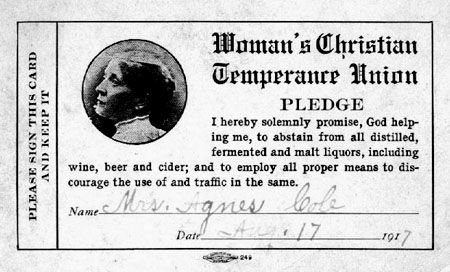 William Brown, proprietor of Brown’s Physical Training Farm [now The Garrison], who had been nominated to be a county constable, wrote that he would refuse to serve if elected. “I have tried to be a good neighbor and citizen and retain the respect of my friends,” he wrote. “I feel that I could do neither if I should become involved in Putnam County politics.”

Six years after her death, Julia Butterfield’s estate was valued, after all debts were paid, at $1.6 million [about $24 million today]. Of that, $210,000 [$3.2 million] was earmarked to build a library and a hospital in Cold Spring. However, the parents of her only heirs — four great grandnieces and a grandnephew, all infants — had contested the will. The five relatives received “substantial” amounts and their court-appointed surrogate was awarded $10,000 [about $150,000].

In its last home game of the season, the Cold Spring baseball team defeated Garrison, 12 to 1. It also played Nelsonville, West Point, Newburgh and Beacon. 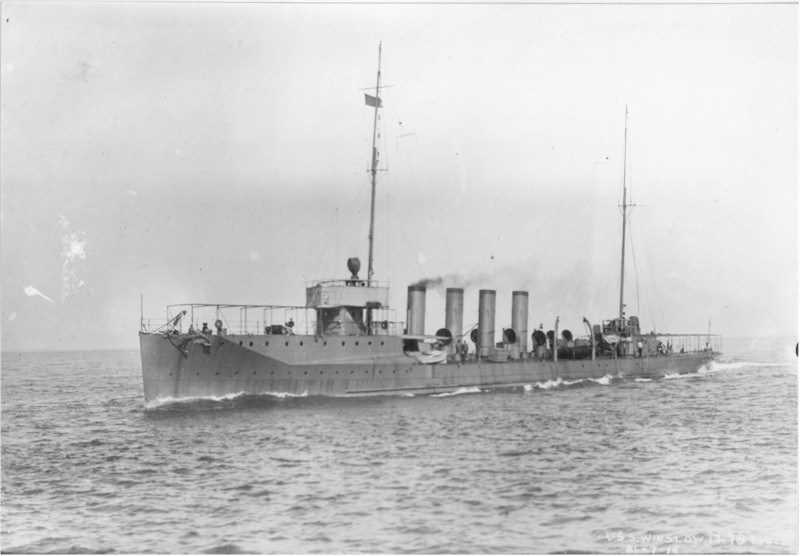 This Navy destroyer docked at Cold Spring in 1919.

A U.S. Navy destroyer, the 300-foot Winslow No. 53, stopped at the Cold Spring dock for a few hours to offer tours during a recruiting trip from New York City to Troy. The boat, which had 4-inch guns and eight torpedo tubes, housed 65 men but needed 30 more. One resident, Edward “Buster” Lyons, enlisted.

The state Labor Committee informed Putnam County farmers that they would have to find their own help for silo-filling and fruit-picking because of manpower shortages due to the war. British soldiers at the Putnam Valley Rest Camp had filled the gap the previous year. Volunteers were asked to contact the Farm Bureau.

More than 1,500 people attended the funeral of former Putnam County Sheriff Allen Gilbert, 84, although less than a quarter were able to fit inside Canopus Methodist Church. The procession included 400 cars, and Philipstown Supervisor Gilbert Forman was among the honorary pallbearers.

Cpl. Frank Lemmo, the son of Mr. and Mrs. Augustus Lemmo of Furnace Street, was reported wounded in action in France.

Mr. and Mrs. Edward Adams of Pearl Street in Nelsonville were informed by telegraph that their eldest son, Lt. Martin Adams, 25, a pilot, was killed in action over France. The 1936 Haldane graduate and football star left behind a wife and two brothers, both fighting overseas.

Pvt. Lucius McKenzie, 28, who fractured his skull and was seriously burned when an Army truck overturned on a sharp turn on Cat Rock Road in Garrison, died at Butterfield Hospital. He was one of five soldiers from Camp Shanks injured during the joy-ride detour as the truck traveled to Camp Smith for target practice.

Residents of Lane Gate Road complained in a letter to the chief health officer of Putnam County about air pollution created by burning at the Philipstown dump.

Judge Samuel Hofstadter, 75, who had a 52-acre estate in Cold Spring, announced he would retire from the state Supreme Court after 37 years on the bench.

St. Basil’s Academy in Garrison dedicated four new dorms that could house up to 80 girls.

The Philipstown branch of the American Cancer Society of New York said it raised a record $3,000 [about $21,000] during its spring crusade.

The Butterfield Library in Cold Spring announced it would offer a computer class that would explain terms such as internet, online and email and introduce users to Philipstown’s community information service, The Highlands Chain.

Hudson Valley Hospital Center announced it would close the emergency room at Butterfield Hospital, noting that ambulances on average brought fewer than a patient a day, and that doctors working overnight sometimes saw no one.

A 34-year-old Philipstown man was charged with criminal mischief after he crashed his riding mower into a sheriff deputy’s cruiser parked along Route 9.

The Philipstown Lyme Support Group announced it would meet on the first Monday of each month at Butterfield Library.

A woman gave birth to a baby girl at Koesling’s Market and Deli on Route 9 with assistance from the owner, Wolfgang Koesling, and John Nochese and Joey Hyatt from the North Highlands Engine Co. Koesling relayed instructions from a 911 dispatcher to the firefighters. The woman, who had recently moved to Philipstown from New Hampshire, came to the deli to call an ambulance.

Cold Spring Mayor Anthony Phillips presided over the dedication ceremony for the newly renovated waterfront, including a new dock and rehabbed bandstand.

Residents organized a fundraiser for an 18-month old Cold Spring boy who became paralyzed from the neck down. He had received a DTP booster shot 12 hours earlier, but doctors said his spinal swelling, known as acute transverse myelitis, could not be linked to the vaccine.

State authorities closed the pedestrian bridge over the Metro-North tracks at Little Stony Point, saying it was unsafe. Richard Shea, the resident park manager, said the closing would make it much more difficult for the Little Stony Point Citizens Association to continue making improvements. If the bridge is in danger of collapsing, he said, “what’s going to happen when there is 3 feet of ice and snow on it?”