Lower level at Butterfield to be closed for five months

The long-anticipated renovation of the Jean Marzollo Children’s Room at the Butterfield Library in Cold Spring is scheduled to begin on Tuesday, Oct. 1, and continue through February. During those five months, the lower level will be closed.

The wait will be worth it, said Library Director Gillian Thorpe. “For a long time a bunch of people of different ages, with different needs, were using the same space,” she explained. “We needed to define it [the children’s area], and, most of all, we needed to find a solution for sound.” 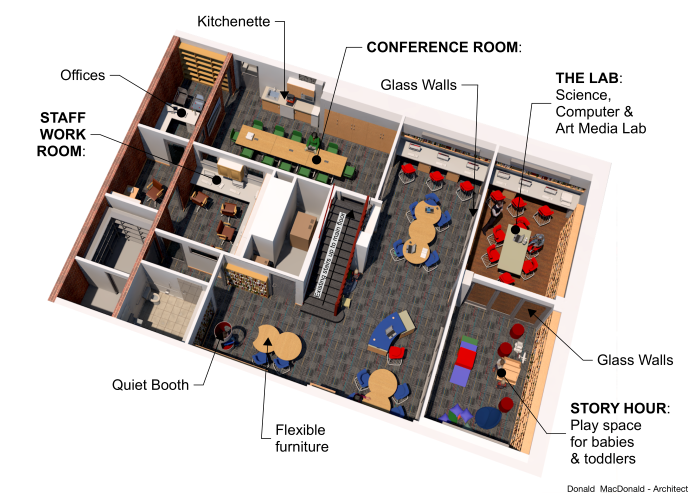 The plan for the lower level of Butterfield Library, designed by architect Donald MacDonald.

The renovations will add two rooms with glass walls that can be opened to expand the space. One will be “a story-hour room,” Thorpe said, and the other will be a space for older children and teenagers called The Lab. “It will be a media lab, science lab, art lab, computer lab,” she said, with computers, 3D printers and art supplies. The Lab will be open to the public at times by reservation.

The level will also contain a common area, circulation desk and “quiet booth,” and the 1980s block furniture will be replaced, she said.

The renovations are part of the second phase of a three-step plan that also includes new computers, more electrical outlets, enlarging a bathroom to make it handicap-accessible and with a changing table, two new handicapped-parking spots, a new library sign and 22 adult reading chairs, which are already in place. 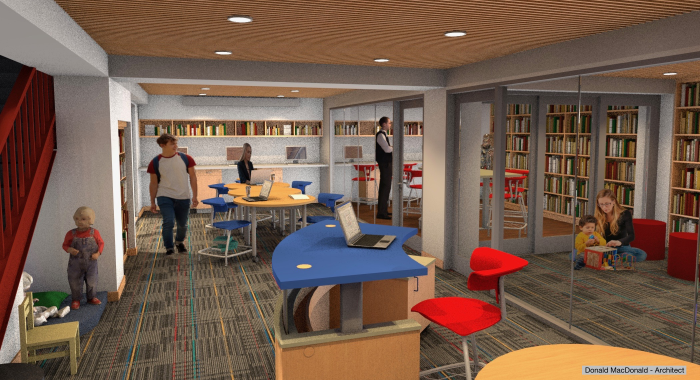 The first phase, which cost $100,000, paid for behind-the-scenes improvements such as a new boiler room, electrical panel, shelving, lighting and carpet, she said. The third phase will cost about $100,000 and include a 15-person lower-level conference room with a kitchenette and better wheelchair access at street level. 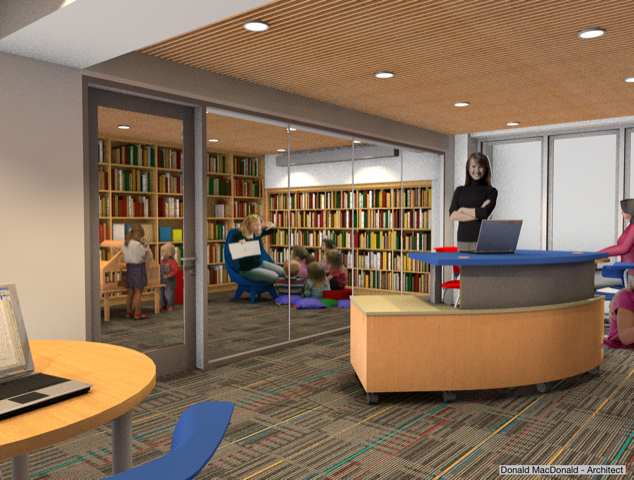 A rendering of the “story-hour” room and circulation desk

In preparation for the closure of the lower level, Maureen McGrath, the head of youth services, has been pulling select books to place in the main reading room near the stage, which will be outfitted with a table and stools. Acknowledging the inevitable chatter of childhood,the library will move two computers to the front room, “mainly for adults escaping from the kids,” Thorpe said.

The staff is looking at alternative venues for its afternoon and weekend workshops and classes for children, such as the nearby St. Mary’s Parish Hall, she said.

The children’s room was named in 2017 for Marzollo, a longtime Philipstown resident best known for creating the I Spy series of picture riddle books. She died in 2018 at age 75. On Oct. 19, a children’s event at the library will celebrate the reissue of I SPY: Spooky Night with additional riddles by Dave and Dan Marzollo.