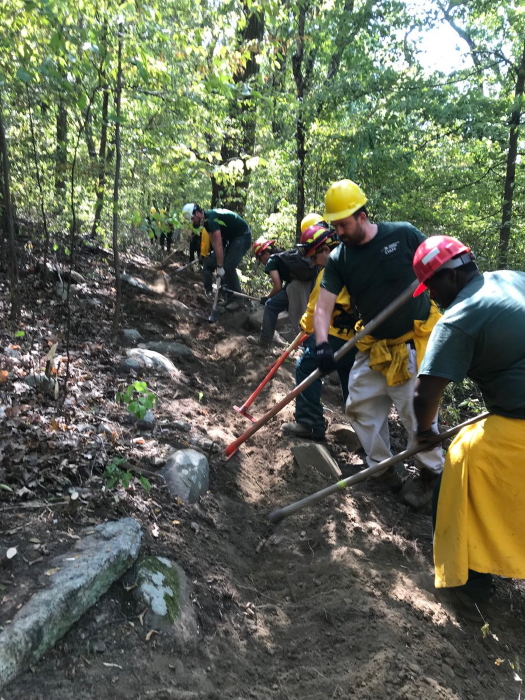 A crew digs a firebreak to contain the blaze on Sugarloaf. (NYDEC)

A smoky blaze that was discovered on Friday (Sept. 20) atop Sugarloaf between Cold Spring and Beacon has been contained but continues to burn, according to the state parks department.

The fire has burned at least 50 acres on the mountain, which is north of Breakneck Ridge and part of Hudson Highlands State Park, officials said. The Wilkinson Trail, which runs from Route 9D to the summit, remains closed above the Breakneck Bypass Trail. All other trails are open.

On Wednesday (Sept. 25), a representative of the state parks department said “the fire is contained but not out; it continues to smolder,” and that firefighters remained on the mountain. There have been no reports of injuries or structure damage.

Officials said they were hoping for rain, which arrived on Thursday afternoon. 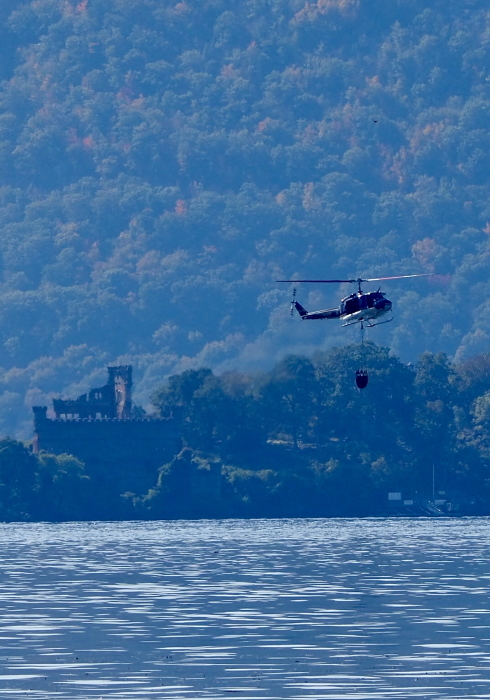 A state police helicopter returns to the fire after filling a bucket in the Hudson. (Photo by Hank Osborn)

Osborn said the flames destroyed mostly ground cover and that “most of the trees will survive.” In fact, pitch pines on Sugarloaf depend on occasional fires to reproduce, he said, adding that this was the first fire in the park in decades.

Firefighters and police officers from the state parks department and the Department of Environmental Conservation spent days fighting the fire, and state police deployed a helicopter to draw water from the Hudson River to drop on the blaze. Crews also dug trenches as fire breaks. Osborn said the area’s steep slopes made that work particularly difficult.

Osborn said Trail Conference volunteers will need to make repairs, including replacing trail markers, before the Wilkinson Trail can be reopened.