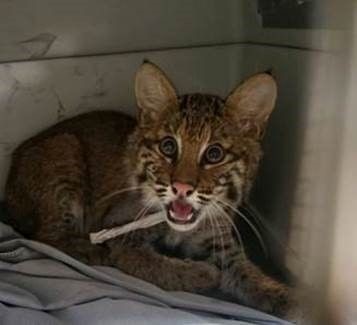 Officers from the state Department of Environmental Conservation last month received a call that a good Samaritan had taken a young female bobcat hit by a car in East Fishkill to an animal hospital but found it closed. Officer Zachary Crain transported the bobcat to a wildlife rehabilitator, who surgically repaired its broken leg. The animal was expected to recover and be released in the area where she was found, the agency said.

On Sept. 8, two officers were performing fishing license checks at the Annsville Preserve in Peekskill when they saw a canoe with three people tip over in the creek. It appeared to be “a playful mistake,” the agency reported, until the officers heard a distress whistle. They commandeered two kayaks from a rental business and paddled to the boat, where they found two adults chest deep in the cool water and a shivering 3-year-old boy sitting in 6 inches of water.

Officer Charles Eyler got into the water and placed the boy inside his kayak before hand-siphoning enough water to get the adults back into the canoe. His partner, Craig Tompkins, paddled back to their vehicle as Eyler walked the boats to shore.