One artist thinks so

Cardboard. It’s everywhere, but probably not something you give much thought.

Henry Klimowicz gives it a lot of thought. He’s been creating art from it for the past 12 years and he’s still excited about its infinite possibilities for shape-shifting.

Examples are on exhibit in his most recent show, Method for Proceeding, which continues through Nov. 10 at the Garrison Art Center. 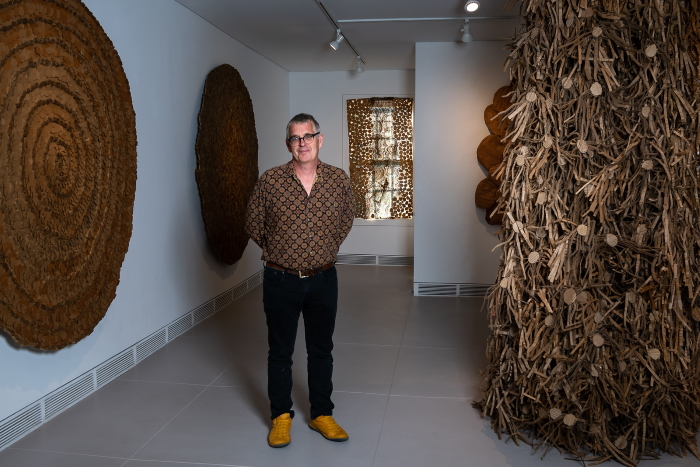 It’s not that Klimowicz sees things in cardboard that mere mortals do not. It’s the opposite. He uses the material because, he says, it’s straightforward.

“It has an ever-present cultural bias related to its past uses as a container or its present use as waste,” he says. “I love it when the material transcends its cultural confines. If I can make something beautiful from cardboard, I have then said that anything can be made valuable, fruitful or hopeful.”

In 1986, after moving to Brooklyn from his hometown of Milwaukee, he found himself living as a sculptor without room to make anything very large. “In this one little room, cardboard seemed to be a natural,” he recalls. 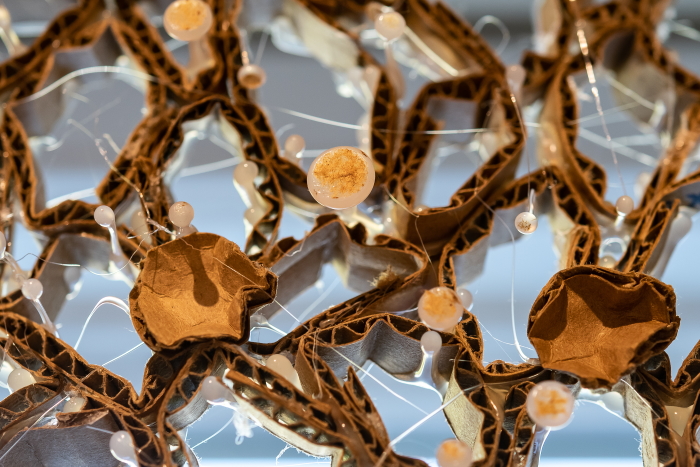 Detail from a window installation (Photo by Amy Kubik)

After an extended break following the birth of his daughter, Klimowicz found himself working with circles. “I wanted a form, a size, literally 6 feet, slightly bigger than life-size, to hold your attention,” he says. “They were mounted on wood, but as they progressed I lost the need to be upright and rigid.”

The circles mutated into abstract forms. “A great thing with working figuratively is you can make scale changes,” he explains. “The structure can be seen as if you are looking through either a telescope or a microscope. That’s why my titles [e.g., “Circle #4”] are so blasé. I’m trying not to weigh in on what you find.”

Many of his pieces have no clear orientation, because, Klimowicz says, “front or back, turned this way or that way, inherently it’s the same object. I’m a strong believer that there are lots of good solutions.” 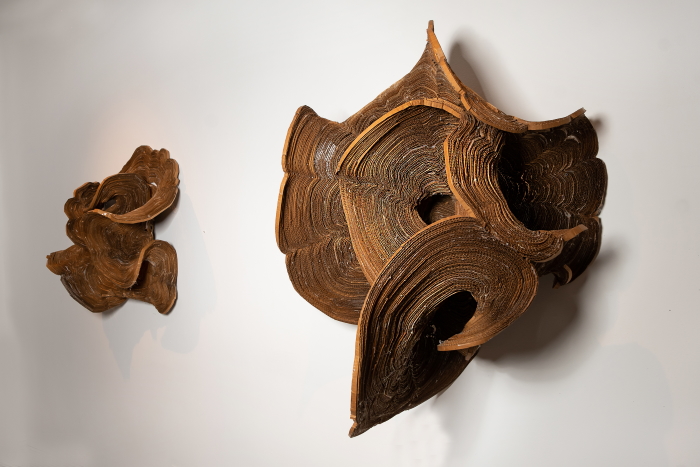 Klimowicz says his works grow organically. “I sit there and interact with ‘the thing’ through this whole process,” he says. “I’m somewhere at the back of the boat, doing the steering. They work best when I’m not overtly demanding of them and there isn’t a dominant human presence in the making of them.”

The artist, who works in a studio in a barn in Millerton that also houses a gallery he runs, uses only one type of cardboard: single ply, which is not pulpy or rigid.

“I want a material that’s generic, and that I don’t have to fight to find,” he explains. “Some people bring me beautiful cardboard, but it’s not something I can count on. It goes back to the sense that what I make is made by me and not by the material itself. There’s an entrance into this work because we all use this material. Unlike many art materials, everyone knows what it’s like to deal with this stuff.” 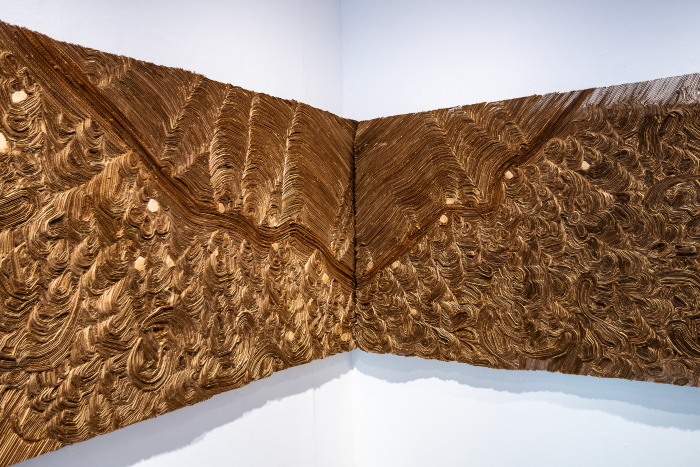 The question Klimowicz now finds himself asking is: “How many ways can I think of to use this? The work progresses; it can be like mining coal, following a vein. My studio is large enough that I have the privilege of looking at my work from the past. I can see a piece, 150 pieces back, where I missed something about it, and I can go back to it.

“For most artists, who don’t have this kind of space, in order to make the fourth piece, they have to use memory, which is a bit of manipulation on the part of your brain,” he says. “I feel as committed to a piece I did 12 years ago as I do to a piece I did last month. That’s a difference between older and younger artists. Eventually we figure out it’s a continuum where you have to acknowledge the past as well as your present.”

The Garrison Art Center is located at 23 Garrison’s Landing; its gallery is open 10 a.m. to 5 p.m. Tuesday to Sunday. On Oct. 19, Klimowicz will speak about his process during an evening benefit, and on Nov. 2, he will host two sculpture workshops. See garrisonartcenter.org.