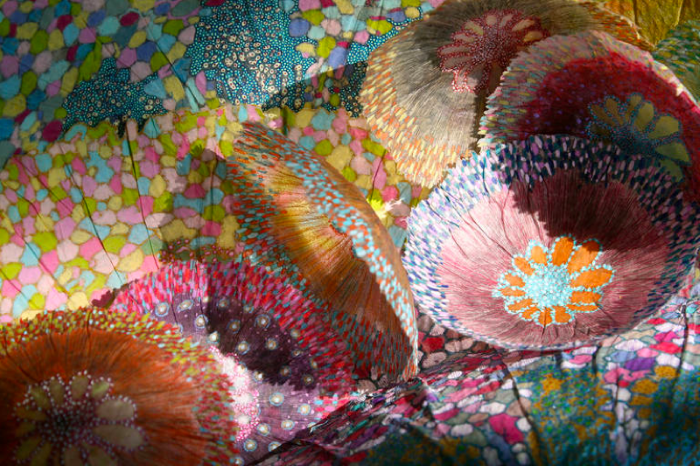 In Boscobel’s latest exhibit, Cross-pollination, the merging forms are separated by centuries, rather than disciplines.

The show, which continues through Nov. 3, unspools on the walls, mantels and tables of the Federalist-era mansion before concluding in the exhibition room. It was inspired, says Jennifer Carlquist, the site’s director, by a “re-imagining” of the replanting of Boscobel’s formal garden with species native to the Hudson Valley that were coveted in early American gardens. The flora blooms for long stretches of the season and was friendly to birds, bees and other pollinators, she said.

Carlquist’s frequent walks through the garden, which is situated between the ticket office and the entrance to the house, led her to reconsider the floral motifs in the mansion and the permanent collection, as well as how prevalent floral design remains in contemporary furnishing and décor.

“So many objects at Boscobel, including those which are intimate and personal, even the wallpaper, have plant forms,” she says. “It made me think of doing something which juxtaposes old and new aesthetics. Foliate forms such as leaves and flowers are fundamental units of design.” 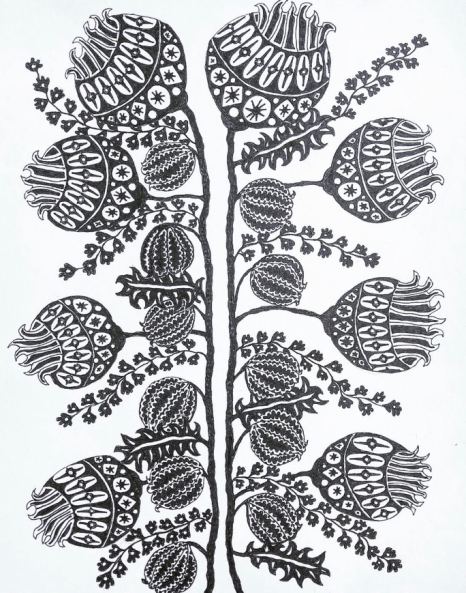 An ink drawing by Marian McAvoy

As a visitor walks through the house, the contemporary works are not always recognizable in the period rooms.

At the front entrance, a pair of Wendy Small cyanotypes mirror each other on opposite walls. The artist “makes meaningful graphic patterns, many of which refer to fertility,” Carlquist explains. “She celebrates her weeds. Weeds are a cultural construct anyway: What’s a weed in some cultures is a plant in others.”

Placed nearby are works by Eleanor White, one made with silver paper onto which she flocked glass beads, eggshells from chickens and emus, and wood ash. “To me these are mixed media pieces of abstracted floral forms, some natural, some man-made, reflecting changes of light all day long,” Carlquist says. “The piano below complements it, with its carved, patterned, floral forms.” 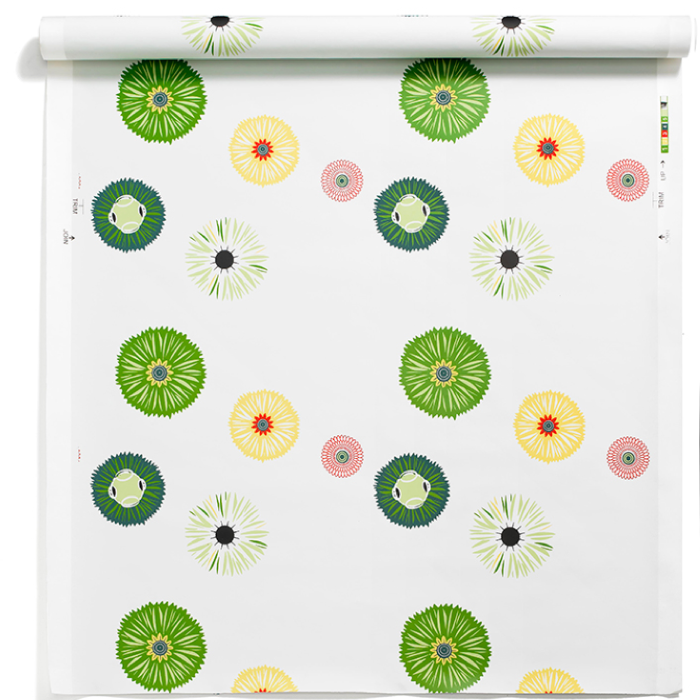 “Celadon” wallpaper from the Kimono group by Sara Story

In the dining room, there is an installation of modern wallpaper by Sara Story of Beacon, with a kimono pattern. In early America, “there was already an Asian influence such as with the bamboo chairs, which they called ‘fancy chairs,’ ” Carlquist explains. In the adjacent pantry room, “we have bamboo wallpaper, which highlights the traditional Chinese porcelain set. Americans couldn’t buy decorative porcelain until the Treaty of Paris” in 1783 that ended the Revolutionary War.

Among the contemporary objects placed throughout the house are Livia Cetti’s geranium paper designs in the drawing room and Jill Parisi’s faux terrariums (always in bloom) in the library. “Geraniums began to be imported in the 18th century, and it’s fun to show them off in this way,” Carlquist says. 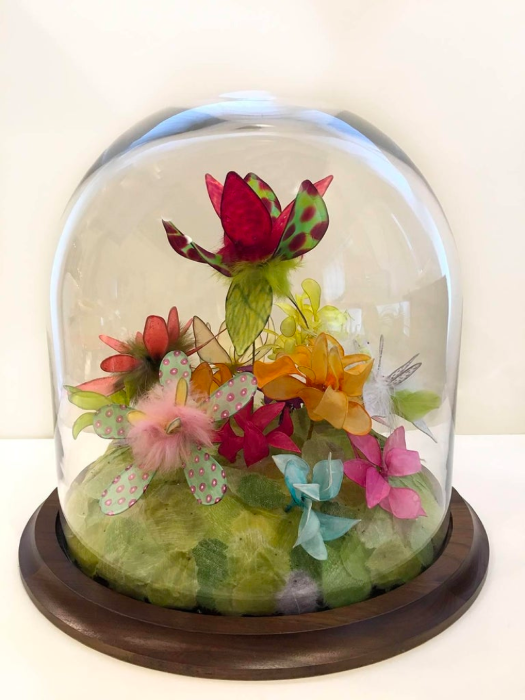 A terrarium by Jill Parisi

Other works include sculptures made from bookbindings and covers by Erin Walrath; ink drawings by Marian McAvoy; lamp sculptures as fantastical underwater plant forms by Austin Ballard; sugar-maple photos printed on Japanese kozo paper by Jeri Eisenberg; field notes made with pigment and printed on mulberry paper by Lori van Houten; and Matthew Friday’s diagrams that explore species migration made with plant dyes.

Cross-pollination: An Evolution in Foliate Forms is open from 10 a.m. to 5 p.m. Wednesday through Monday. Admission is free with tickets to the grounds, which cost $12 for adults and $6 for children. See boscobel.org. On Oct. 16, Carlquist will speak on floral imagery in early America and on Oct. 27 Boscobel will host a paper-flower workshop.