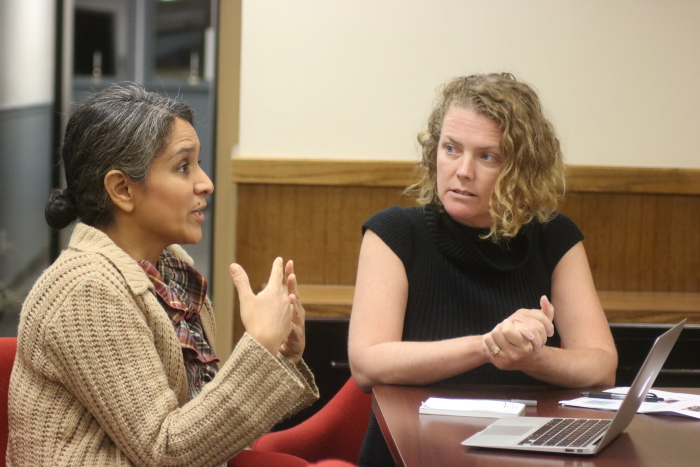 Rebecca Ramirez and Ann McBride-Alayon spoke with the Village Board on Oct. 8 about the Cold Spring trolley. (Photo by M. Turton)

Board members cool to Chamber suggestions

A lukewarm reception awaited the co-chairs of the Cold Spring Area Chamber of Commerce trolley committee when they addressed the Cold Spring Village Board on Tuesday (Oct. 8).

Rebecca Ramirez and Ann McBride-Alayon were seeking support from the five board members, including the mayor, for recommendations to increase ridership on the service, which is operated by the county and has five daily routes with stops in Cold Spring, Nelsonville, Garrison, Philipstown and Beacon.

The committee’s major recommendation was to have the trolley travel a single, consistent route. The current schedule, with five different routes, is confusing to riders, it said. A single route could take two hours to complete compared with its current one-hour loops.

The trolley destinations would remain much the same under the Chamber plan, with runs beginning at the Metro-North station in Cold Spring.

Trustee Lynn Miller opposed including Beacon on the route. “Why pay for a ride to Beacon with Putnam County tax dollars?” she asked.

Mayor Dave Merandy said the trolley is something more suited to a theme park. “This is my home; I don’t need a Rice-A-Roni trolley,” he said, referring to the San Francisco trolley seen in the food commercials.

He pointed to traffic problems created by the trolley on Main Street, at Lunn Terrace (where stopping is prohibited), and at the visitors’ center at the foot of upper Main, where maneuvering the vehicle is difficult.

The mayor was also critical of the trolley on environmental grounds, especially the amount of fuel used in daily round trips between Cold Spring and Carmel, where the vehicle is stored.

The trolley committee will present its recommendations at Magazzino Italian Art on Thursday, Oct 17.

In an Oct. 9 email, Ramirez said the trolley committee has an opportunity to be a catalyst for change. “Wouldn’t it be wonderful if we could help influence our village to collaborate with our county, and vice versa, to improve services that already exist?” she wrote. “This is a significant moment for Mayor Merandy and the trustees to work with the county, perhaps in a way they haven’t before.”

More than 40 municipalities, mostly in Florida and Texas, have been attacked this year by hackers, who freeze computer systems until a ransom is paid that is usually less expensive than reconstructing the system. On Oct. 3, Cold Spring board members discussed the possibility of the village purchasing insurance, which would cover the cost of restoring the system and any ransom paid as a last resort. Murphy said a $1 million policy would cost $836 annually.

The cost of recycling continues to escalate. Garbage disposal is $84.50 per ton and recyclables are $87.48 per ton. (Village crews collected nearly 58 tons of trash and 18 tons of recyclables in September.) The village uses single-stream collection, co-mingling all recyclables, but Murphy said dual-stream collection, in which paper and cardboard are picked up one week and plastic and cans the next, could be less expensive.

Larry Burke, the officer-in-charge for the Cold Spring Police Department, reported 93 calls for service in September. There was one arrest, for driving with a suspended license. Drivers were ticketed for 62 traffic violations, including 17 for speeding, and 62 parking tickets were issued.

Water levels in village reservoirs dropped by more than 11 percent in September, after less than a quarter-inch of rain. Voluntary conservation measures are in effect.

Trustees approved a request by the sloop Clearwater to dock at Cold Spring from Oct. 16 to 18. As a nonprofit it pays no fee for docking for up to 21 days a year, so Murphy suggested the village ask Clearwater to offer programs to Haldane students.

3 thoughts on “Little Traction for Trolley with Cold Spring Board”