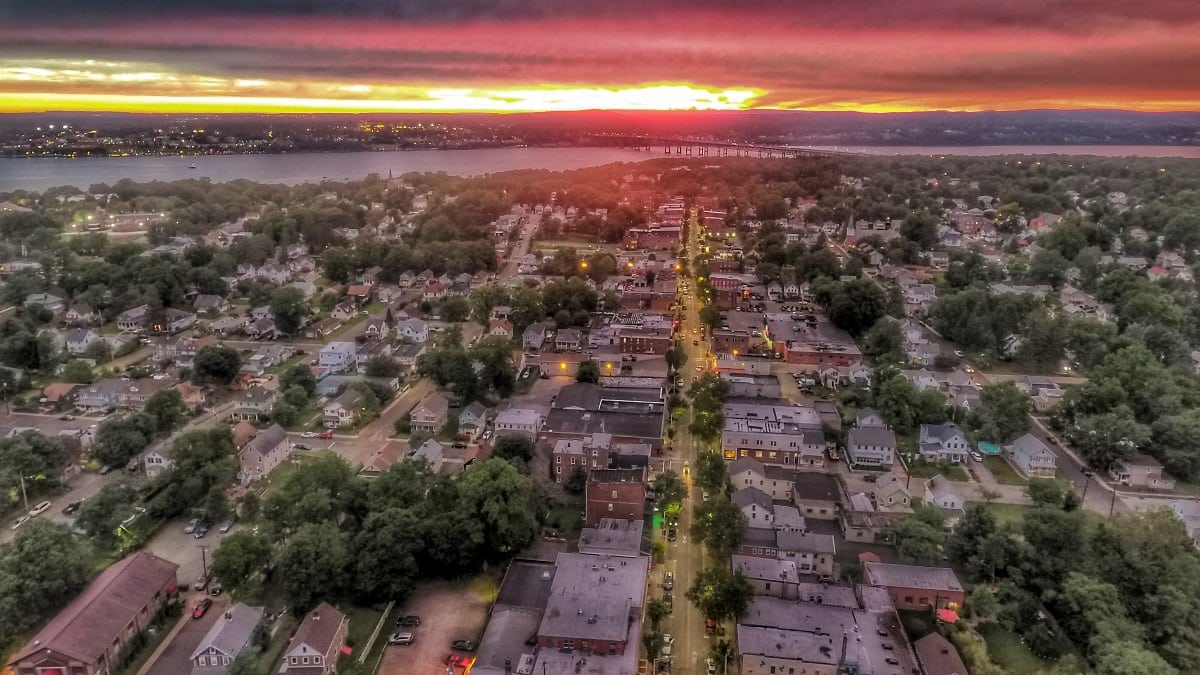 Main Street in Beacon, looking northwest toward the bridge (Photo by Scott Harrison)

A state law enacted in June allows counties throughout New York to create governing boards to set limits on how fast the owners of some older buildings can raise rents, although not how much they can charge.

The law, signed by Gov. Andrew Cuomo, made the Emergency Tenant Protection Act (ETPA) permanent and expanded rent stabilization beyond New York City and Westchester, Rockland and Nassau counties. The Beacon City Council, which could ask Dutchess County to create the board, is expected to consider the issue soon.

The ETPA, which was adopted in 1974 and caps annual rent increases to a percentage determined by local boards, was set to expire this year. It was designed to stabilize prices in places where overflow from New York City had resulted decades ago in rapidly increasing rents.

The law has caveats, however. It applies only to apartment buildings with six or more units that were built before Jan. 1, 1974. The buildings also must not have been “substantially rehabilitated” since that date. In Beacon, that means some buildings constructed after the “urban-renewal” era of the mid-1960s, including units built during the development boom of the last few years, would be unaffected.

Among its provisions, the law:

Makes the rent-regulation system permanent, rather than requiring the Legislature to renew it every four to eight years.

Limits landlords and their immediate family from claiming more than one unit in a building for owner use, which removes it from rent control.

Limits the amounts that owners can raise the rent to pay for capital improvements to the building or individual units.

Raises the number of tenants in a building who must agree to purchase apartments before the building can be converted to condos from 15 percent (which included outside investors) to 51 percent (who must all be residents).

Bans landlords from using “blacklists” of people who appear in police reports and court documents.

Creates the misdemeanor crime of “unlawful eviction,” punishable by a civil penalty of $1,000 to $10,000 per incident.

Beacon officials say they’re gathering data to determine how many buildings fall within the ETPA parameters. That includes sorting through building permits to determine whether structures have been rehabbed, which the state defines as at least 75 percent rebuilt. Once that evaluation is finished, the issue will go back to the City Council for discussion, City Administrator Anthony Ruggiero said.

The council could then explore rent stabilization, which, if adopted, would involve Dutchess County creating a board to set maximum allowable annual increases. The ETPA does not allow for rent control, which puts a ceiling on the price a landlord can charge.

Council Member Terry Nelson asked his colleagues to look into rent stabilization in March, and the council adopted a resolution, joining Newburgh, New Paltz and other municipalities in the region that asked the state to extend and expand the expiring ETPA.

“Affordability comes up often in Beacon, and when it’s spoken about, it’s often about the new developments,” Nelson said this week. “But the people already living here have also been neglected. Those constituents need to be served, too.”

Nelson said he’d like to see a higher percentage of newly constructed units set aside to be rented at below-market rates, either voluntarily or through a revised affordable housing law. Beacon requires 10 percent of new developments of 10 units or more to be “affordable,” which is based on a percentage of the county’s median income.

“It’s going to be ‘look yourself in the mirror’ time for some of the developers to think about whether they want to be part of this community,” Nelson said.

Developers and landlords have argued that below-market rate requirements make investing in housing unsustainable. In New York City, some landlords have suggested rent-stabilized buildings could lose up to 45 percent of their value, while developers have cautioned the Beacon Council that too many regulations will scare investors away.

But “that’s something I can’t really worry about,” Nelson explained. “I have to worry about the constituents first.”

Legal Services of the Hudson Valley is planning to hold a forum later this month to help Beacon landlords understand the new law.