After the older children had been led off to play, the women who remained in the room at the Beacon Recreation Center on a recent Thursday evening were asked by a moderator to “say your name and who is in your house.”

Maureen: “I have a 15-month-old [grandson] whose parents are in Florida. I have temporary custody, which will probably lead to adoption. It’s an interstate nightmare.”

Megan [holding a toddler]: “This teddy bear will be 15 months old next week. We’ve been coming here for almost a year. His mom is our oldest daughter; she lives in Iowa. I have permanent guardianship, so he’s with us forever. Our other daughter is his aunt — and his sister.”

Mary: “I have my grandson. He’s 19. I’ve had him since he was 1. I expected to have him temporarily, but it’s a never-ending process. He tries with his mom, but his mom doesn’t understand him.”

The women were attending a monthly meeting of the Relatives as Parents Program (RAPP), which Cornell Cooperative Extension has been overseeing in Dutchess County for more than a decade. The Beacon group was launched earlier this year; meetings are also held in Fishkill, Poughkeepsie and Amenia. (In Putnam County, the CoveCare Center hosts twice-monthly RAPP meetings in Carmel.) 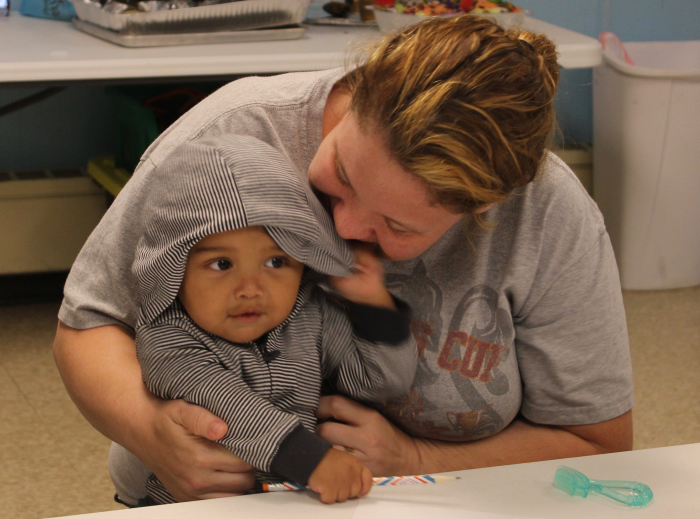 Megan, a participant in a Relatives as Parents Program session at the Beacon Recreation Center, holds her grandson. (Photo by A. Rooney)

The support sessions are open to any relative or family friend, male or female, who is caring for a child who is not their own. Most are grandparents. The U.S. Census Bureau estimates that more than 2.5 million grandparents are the primary caregiver for at least one grandchild, and that about 10 percent of children in the U.S. live in a household run by a grandparent or other relative because the parents are deceased or have given up or been legally barred from caring for them.

Most RAPP sessions run for 90 minutes, usually in the early evening (in Fishkill, it’s on a Tuesday morning) and begin with a meal before the children depart for “play therapy” with a counselor.

Some sessions function as a support group, “where everyone gets to say what’s going on in their life,” trade advice and offer encouragement, while others include speakers on topics such as finances, explained Jessica Canale, the family and consumer education program leader for Cornell Cooperative Extension, who coordinates the groups. She said that one gathering included a visit from a therapy dog, “which was technically for the kids, but…”

There are also family excursions such as visiting an apple farm with a corn maze and animals. During the holidays, parents can drop a child off at the RAPP offices for a half-day to go shopping, dine out or catch up on sleep. The Cornell Cooperative Extension also offers referrals to psychologists, educators, food banks, clothing sources, financial managers and a foster family coalition. It supports 10 to 14 families with summer-camp scholarships.

At the recent meeting in Beacon, a social worker, Sherryl Redding, spoke on “how parenting your grandchildren can bring joy in your life.” The goal of her work, she said, was to keep the children with family members and out of foster care.

Redding spoke of the emotions a child may feel being separated from his or her parent or parents. “They have regret that they aren’t living with their birth parents, like ‘normal’ kids in their classroom,” she said. “Another emotion is guilt. A lot of kids feel like it was their fault.” Therapy can help, she said. “You may have explained [the situation] to them, but their reality was different. In the process of parenting, it’s so easy to see the tough times and rejection we sometimes get from our older kids who are not with their parents.” 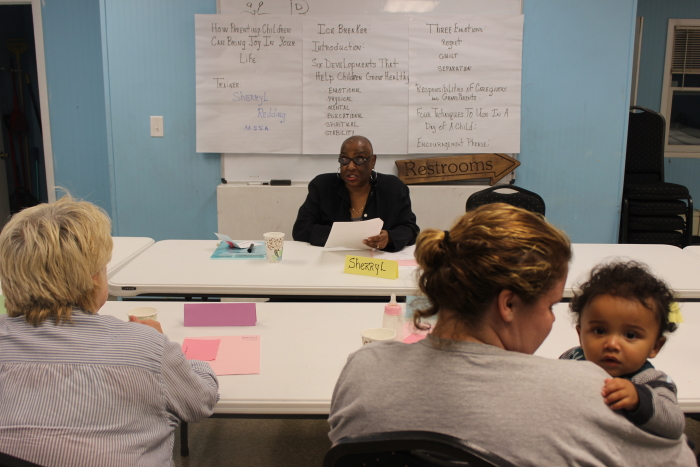 Social worker Sherryl Redding (center) discussed how children might feel while being raised by relatives. (Photo by A. Rooney)

Redding asked each woman to take an index card to write, on one side, about a struggle, and on the other, a blessing that came from that. One participant revealed that her grandson’s father was addicted to opioids. She said the child had been placed in foster care for three weeks before coming to her. “He was gone, which was heartbreaking,” she said of her grandson. “I’m sorry — I don’t want to be angry anymore.” Redding responded: “It’s no easy journey; you’re adjusting to having a baby. We’re going to help you find some blessings.”

Another woman described her situation as a struggle because the child has medical problems, but “our blessing is that out of medical issues we have developed a lot of support for our family. Now we have a new diet. We’re going to be super-healthy — not even canned vegetables.” To this, Redding offered: “He’s teaching you a lot of patience, because you’ve helped him.”

Megan and her husband have been attending the sessions in Beacon for about a year. “It helps tremendously,” she said. “Here you’re not alone and outside of here it feels alone a lot. A lot of us are not super-young, and it’s wonderful to have the legal questions, the psychology questions, even meditation. The kids get to have that camaraderie with other kids” who are in a similar situation.

In Putnam County, meetings are held on the first and third Thursday at 6 p.m. in Carmel at CoveCare, 1808 Route 6. For information, see covecarecenter.org or call Wanda Crowley at 845-225-2700, ext. 224. The meetings are coupled with Family Connections, a support group open to any parent or caregiver facing challenges. Childcare is available.