Thirteen years is a transitional age in a boy’s life: Old enough to deploy sarcasm, but not quite old enough to recognize when it’s being used against you.

“So … that’s the right way to go?” called out Tom Campanile, the assistant scoutmaster of Boy Scout Troop 437, which is based in Garrison. It was a beautiful autumn Sunday and Campanile and I, along with three other adults, were on our way down Bull Hill (Mount Taurus), finishing a hike with seven Scouts ranging in age from 11 to 13.

“Instead of staying on the yellow trail and ending up back in the parking lot we started from, we’re going to take the white trail, end up at Little Stony Point, and walk all the way through Cold Spring and Nelsonville to the parking lot?” Campanile asked (suggested) to the boys, who had been charged with mapping the route.

We could not see the Scouts, who had already turned onto the white trail, but after a few seconds, a voice answered back. 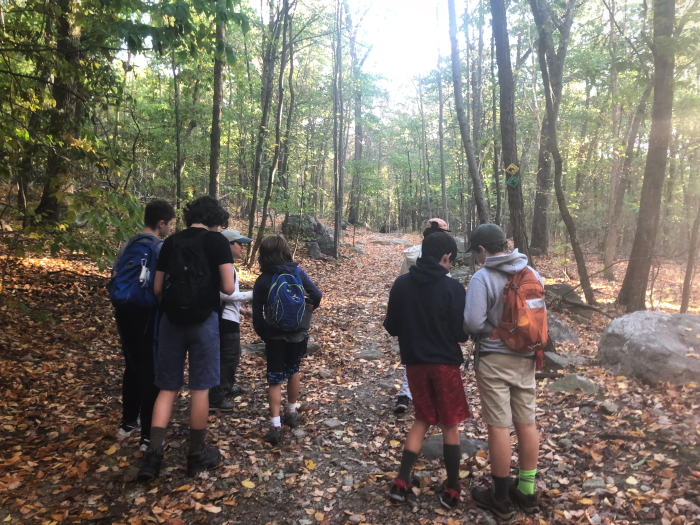 When Troop 437 goes on hikes, the oldest scouts are in charge. This time, that was Dashiell and Iain. To earn hiking merit badges, the troop was on a 5-mile hike to the summit of Bull Hill, one of the many hikes they must complete of up to 20 miles. Dashiell and Iain picked the route and led the orienteering.

The group cut a detour on the Split Rock Trail and Lone Star Trail from the plan because Dashiell and Iain decided to nix it. When they made that decision, the adults kept their mouths shut. If the Scouts aren’t endangering themselves, the group goes along.

Sometimes though, if a decision would result in an extra hour of hiking, on a route that would pass alongside busy roads, the Scouts get nudged.

“Are you sure?” Campanile asked about their route plan.

After a moment, one of the teens called back: “We’ve decided to take the yellow trail.” The adults smiled at each other. I felt a strange combination of admiration and jealousy. When I was in Boy Scouts, we did not get to make decisions. We didn’t pick the route. We were not granted the responsibility of choosing our menus on campouts and cooking the meals for everyone, even if it resulted in being served, as one parent, John Pieza, put it, a “not-quite-baked potato” or burned ramen.

The adults now do their own cooking — they call themselves the Rib-Eye Patrol — but the kids still choose and cook their own. If the meals are sugar and spaghetti, that’s what they cook and eat. They also deal with the consequences.

Before the hike, Campanile asked if everyone had brought a compass. There was an uncomfortable silence. More than once, as the teenagers led us off down an unmarked herd path, an adult would have to innocently call ahead: “You guys see any trail markers?” At the same time, the children were allowed to make the sort of mistakes that lead to knowledge. The best way to learn how to not get lost is to let yourself get a little lost once in a while. That is a tough lesson for parents, too, as they reluctantly allow their teenagers to sometimes learn the hard way.

We made good time, completing the 5.3-mile hike, with more than 1,200 feet of climbing, in less than three-and-a-half hours, including breaks. The Scouts were happy to linger at the summit, enjoying the views of Philipstown and the Manhattan skyline. The adults who lead Troop 437 treat this particular badge very seriously, using the hikes as a way to connect the kids to the unique place they’re fortunate enough to grow up in — to live in the place where they are.

When he’s not writing for The Current or teaching journalism at Marist College, Brian PJ Cronin can usually be found outside doing something questionable. You can reach him at [email protected] Anyone interested in joining Troop 437 or Cub Scout Pack 137 can find more information at beascout.org.

2 thoughts on “Out There: And the Teens Shall Lead”