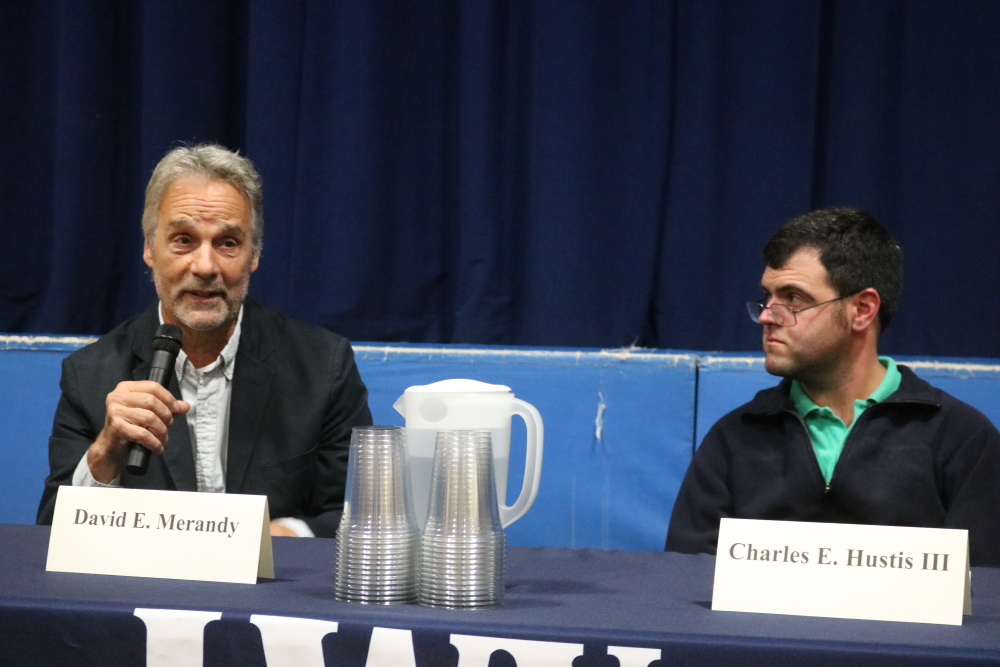 Political drama was largely absent — as were a number of candidates — at a League of Women Voters of Putnam County forum held in the Haldane school auditorium on Wednesday (Oct. 16) in anticipation of the Nov. 5 election.

The only candidates who showed up who will oppose each other on the ballot on Nov. 5 were incumbent Cold Spring Mayor Dave Merandy and his challenger, Chuck Hustis.

Incumbent Cold Spring Trustees Marie Early and Fran Murphy fielded questions; a challenger, Margaret Parr, will appear on the ballot but said she has suspended her campaign because she plans to soon move out of the village and did not attend the forum.

In Philipstown, three candidates are vying for two seats on its board. Incumbents Judy Farrell and Robert Flaherty participated but challenger Corey Lyons did not.

Tara Percacciolo, a first-time candidate for Philipstown clerk, was present but not able to answer questions because her incumbent opponent, Tina Merando, was absent. Under League of Women Voters rules, more than one candidate for an office must be present.

Similarly, Philipstown Judge Camille Linson, who is running for Putnam County judge, attended but was unable to field questions because her opponent, Joseph Spofford, did not attend.

In his opening statement, Merandy emphasized his experience in elected office as a Haldane school board trustee, Philipstown board member and two-term mayor.

Hustis stressed the need to think outside the box for projects such as Dockside Park and Main Street and expressed concern that high property taxes could force residents to leave Cold Spring.

The two fielded questions submitted by the audience of about 50 people.

Asked what his priorities would be if re-elected, Merandy said he wants to resolve the ongoing issue of short-term rentals in a way that can be supported by most residents.

“And probably more important in the long term is to move the dam repairs along,” he said, referring to a project that has been ongoing for 10 years through a number of administrations.

Lastly, Merandy said, finalizing the work of the Code Update Committee in revamping the village code is important not just to the government but to all residents.

Hustis said his first priority would be to come up with a design for an upgraded firehouse that the community could support, funding it either by bonding or through grant sources such as the federal Department of Homeland Security. “If possible, we should offset the cost and not increase taxes, which would chase people out of here,” he said.

Hustis said he would also focus on improvements at Dockside Park and that he has met with Garrison resident Sandy Saunders about a project that would use the park as a port for the sloop Clearwater.

His third priority, Hustis said, would see more plants and trees added along Main Street. “It needs a little more color and variety,” he said.

The candidates were asked if they would support forming a charter committee to look into ways for the village to receive sales tax collected by Putnam County, revenue the county does not share with municipalities.

Hustis said he would send a delegation to Carmel “to put a little pressure on the county executive to see if we can get some attention over here,” adding that even a small percentage would be an asset.

Merandy said he didn’t think sending a delegation would change any minds, but he “definitely would not be opposed to setting up a charter committee to look into ways we could force their hand.” He termed it “alarming” that the village only receives $7,500 from the county to support tourism, “when Cold Spring is the center of tourism.”

Neither was enthusiastic when asked about possible consolidation with Nelsonville and Philipstown.

Merandy said outright merger of the three municipalities would be extremely difficult and that it wouldn’t produce the savings people want.  “I feel what we are doing now is efficient,” he said, adding that municipal leaders are not “raking in lots of money” or abusing power. “It should stay the way it is.”

“I would be against consolidation,” Hustis said. “I’d like to be separate and distinct, away from everybody else.” He did say he would support consolidating some municipal services, “but only if people in the village can save money.”

In his closing remarks, Hustis cited his background in the private sector in supermarket management as one of his strengths. “With my work, dealing with workers under me, I could tackle village issues,” he said. “I know how to work with people, how to seek advice and locate funds that could help people and projects in the village.” He said voting for him is a vote for a vision of moving Cold Spring forward.

Hustis seemed to temper his optimism,  however, stating, “if I don’t get elected, we still have to work together for the common good.”

Merandy was more aggressive. “There’s a stark contrast between me and my opponent,” he said. “A lot of the things he put forward he might be more knowledgeable about if he had attended any meetings in the last five years. If you’re running for mayor, I think you should do that.”

Merandy said Dockside Park and Main Street beautification, which Hustis said would be among his priorities, “are already being done as quickly and as efficiently as possible.” He praised the Tree Advisory Board for having put “an incredible effort into helping to beautify Main Street,” and referred to the agreement negotiated with the state in which the village took over management of the property as “one of our best accomplishments.”

Asked what projects they are most proud of from their two terms in office, Murphy said completing the Main Street project which began in 2009 topped her list. She also identified the agreement with New York State transferring management of the property to the village.  “We finally have the ability to use the park,” she said.

Murphy also pointed to the clean-up of coal tar at the Cold Spring Boat Club site. “We accomplish things as a group,” she said.

Early also listed the Main Street project first, explaining that she worked outside with contractors while Murphy handled project administration from the village office. Second on her list was the addition of a pay station to the municipal parking lot on Fair Street, a project she said brings in money that can be spent on projects without using tax revenue. Lastly, she noted the importance of her work since 2014 as liaison to the Code Update Committee.

The two incumbents were also asked about what challenges they’ll face when re-elected.

The pending repairs to the village dams was first on Murphy’s list. She also said improvements are needed to village owned buildings as well as improvements to village roads such as Fishkill Ave and drainage improvements on Northern Ave.

Early stuck with the ongoing code update, saying she will work with the village board which will make any final changes to the document’s more than 500 pages. She also said the firehouse has a number of problems to be resolved including the need for a new boiler and repairs to meeting room’s uneven floor. She added the highway department garage roof to the list of upcoming projects.

Asked about the state of the town’s infrastructure, Flaherty said the biggest need is the $1.5 million renovation planned for the Town Hall. He also said the highway department garage on Fishkill Road, “needs a lot of work.”

Flaherty said early next year, the town hopes to add solar panels at the recreation center in Garrison, a project he said will enable the center to produce more electricity than it uses.

Farrell said that LED lighting to be installed at the recreation center, one of the town’s biggest users of electricity, will reduce electrical consumption resulting in cost savings.

She also emphasized her continued support for the town’s Climate Smart Community initiatives including participation in the Community Choice Aggregation program through which Philipstown’s electricity is purchased from  renewable energy sources.

But Farrell said her dream is to see more biking and walking trails in Philipstown. “It’s an infrastructure issue,” she said, adding benefits include reducing the town’s carbon footprint and improving residents’ wellness.

Farrell said her experience matters. “My life has been dedicated to improving the lives of others,” including advocating for healthcare for children seniors and the disabled, she said.  She added that while working for non-profit organizations and local government she has managed multi-million-dollar budgets.

During her time on the town board Farrell said she helped pass the moratorium on vape shops in the town. “I’m also involved with the Communities that Care Coalition and I work with our addiction resource coordinator to fight the opioid epidemic.”

Flaherty said he holds a degree in business administration and economics and now works as a senior project manager for a technology company where he provides expertise in information management to business, government, healthcare and educational institutions and many other industries. During the past year he said he ran a multi-million-dollar project for one of the top car manufacturers in the world.

He said one of his accomplishments on the town board after “town cleanup days” became too expensive was to initiate the voucher program that allows residents to dispose of items at Royal Carting.

He said is especially proud of a project Supervisor Richard Shea assigned to him his first day as a town board member – establishing a memorial to the late Betty Budney, a long-serving town board member. Flaherty said he completed the memorial, which sits in front of town hall, using donations, at no cost to residents.