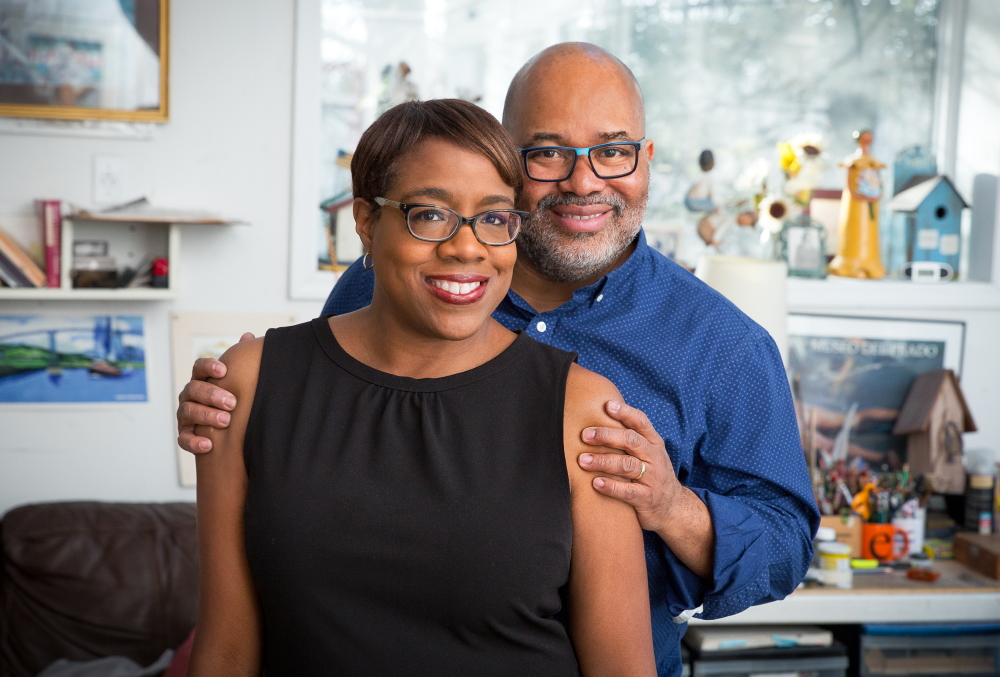 And so, that will be the theme of a family event with the Rhinebeck couple scheduled for Sunday, Nov. 3, at the Desmond-Fish Library in Garrison. Cline-Ransome, who writes children’s books, and her husband, who illustrates them, will be honored with the Alice Curtis Desmond Award for Excellence in Children’s Literature. 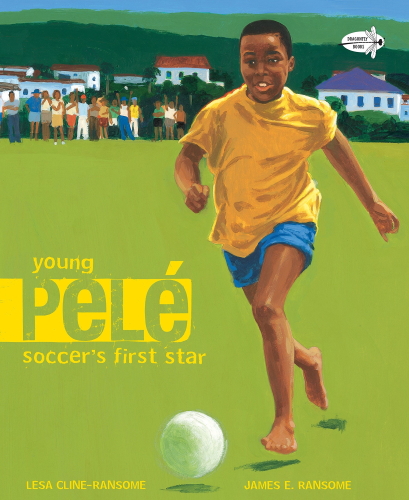 In the past the Desmond-Fish has presented the award as part of its annual spring dinner, but director Jen McCreery says the library wanted to have “a big, family friendly children’s event celebrating art and literature” in the fall. The library will be closed to the public for the day while its staff creates an “autumn wonderland” in which the honorees will lead families in an activity centered on collaborative storytelling with words and art. Refreshments will include a chocolate fountain, hot chocolate and tea sandwiches.

The Ransomes have between them written and illustrated more than 80 books, sometimes together and sometimes working with others. Their subjects have included soccer star Pelé, Helen Keller, Benny Goodman and Louis Armstrong.

The Current recently spoke with the couple over the phone. 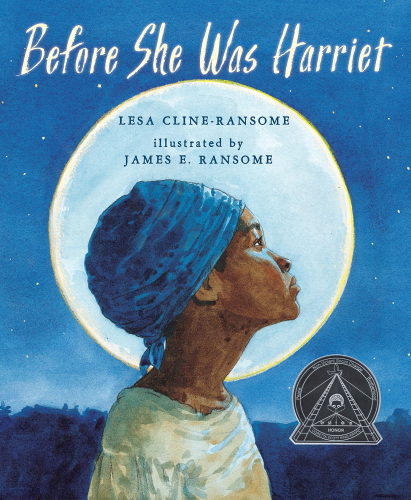 In a book such as Before She Was Harriet, about Harriet Tubman, there’s a cadence in your language that is especially noticeable when read aloud. Is that always the case?

Lesa Cline-Ransome: Harriet is lyrical. I’m drawn to language and all the books have a certain lyricism. I’m inspired by writers like Toni Morrison. I love to read and am inspired by the power of words to be transformative. That’s what I’m looking to convey.

I noticed you sometimes use unusual or challenging words. Is that intended to help children expand their vocabulary?

LCR: It’s never a good idea to talk down to kids. I want them to come away with a good handle on the language, and sometimes you can’t do that if you’re oversimplifying.

When planning a book, how do you determine how much space the text will take versus the art?

LCR: I’m thinking only from the writer’s perspective. James has to figure out the best way to tell it visually.

James Ransome: After doing a few rough layouts, I make a dummy book, or two or three, and it comes into focus.

From “Before She Was Harriet”

James, you’ve written that your drawing took root without formal instruction. Is that unusual?

JR: I tend to believe those who have the desire find a way to make it happen. It’s one of the reasons I like going to schools to talk to children. Unfortunately, there are way too many kids who don’t have that ‘aha’ moment and lose themselves in the maze of figuring it out. I was fortunate; a lot of things came my way and made me float forward. I hope that still happens. There was a lack of access [to art instruction], but there are more distractions today. In the South, when I was growing up in the 1960s, it was just myself and my grandmother, in a very rural area.

You’ve written: “I had always been given the impression that there were virtually no African-American artists.” How did that make you feel?

JR: My grandmother grew up in a different world — she was born in 1899 — and feared I wouldn’t have these opportunities. Because I wasn’t exposed to artists who looked like I did, she wasn’t sure it would happen. But by the time I studied at the Pratt Institute in the 1980s, a lot had changed. There were still not a lot of books being written about African-Americans, but I was prepared to do stories about anyone. I admired the white artists who did African-American characters. I never presumed anything.

Did you imagine you’d be doing what you are doing?

JR: I thought I would do a book every three or four years, that I would be busy for six months out of the year, and during the rest of the time I would work in galleries. I would exist between galleries and illustrating, and I would have long periods where I wasn’t busy. It’s the opposite — I’m busy all the time. I have tons of ideas and lots of projects. When I think about my childhood and the books I wanted to read, I couldn’t be happier creating books for today’s young people.

Do you write each book with an age in mind, or does the publisher decide?

LCR: I just tell the best story that I can, then the marketing group determines the age group. I don’t know how they make those determinations. There are many different levels and ways that children can engage with a book. 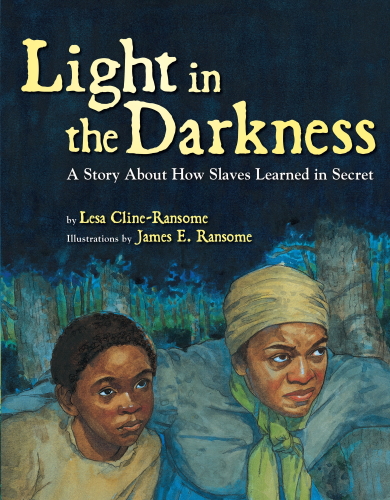 You’ve said that research is one of your favorite things about writing. Is it challenging?

LCR: You have to be accurate — the librarians and editors will hold you close to the fire if you’re not! Some publishers don’t allow invented dialogue; I don’t use quotes that can’t be attributed. The research can be tricky, especially the farther back you go. There have been cases where I wanted to do a biography but because of lack of documentation, particularly during the period of slavery, I’ve had to make it make it historical fiction, such as with Light in the Darkness: A Story About How Slaves Learned in Secret.

When you research a historical figure, what are you looking for besides the basic facts of his or her life?

LCR: Something that connects me to the subject, or that connects children to the subject. For instance, I’ve always loved Helen Keller. I found it fascinating that she experienced the world through a heightened sense of touch and smell. With many of the subjects, I look for a small piece of their childhood that made them who they were, or a turning point in their lives. 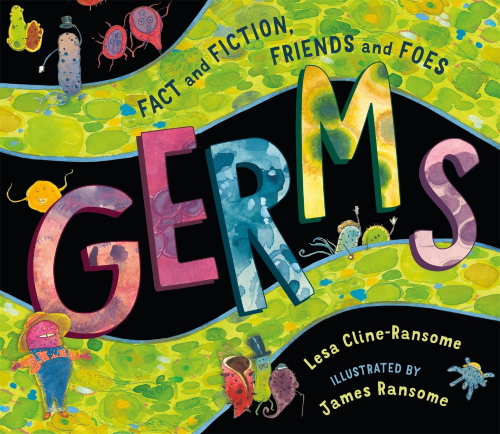 You wrote a book called Germs. What inspired that?

LCR: We have four children. When they were five to 11, I was constantly trying to get them to understand the importance of handwashing. I thought, I’m going to write a book about germs. During the research, I started to become a germ-o-phobe: toilet seats, taxis — I was terrified. I had to get all the amazing info into a book and thought, What better way than to have germs as characters? James had fun with it, as well.

How do you handle, when writing a biography for children, events in the subject’s life that are not behaviors you want to endorse?

LCR: That was a question I had when I started writing the book about Pelé [who would skip school to play soccer], and also with Satchel Paige [who spent time in jail as a teenager]. There are many ways to success. When I was young I hated fictional biographies because generally they profiled people as having perfect lives and perfect families. That’s not the lives of most children. Children need to see all sorts of lives. There’s not always that perfect path — and that’s OK.

Art, Books and Chocolate will begin at 2 p.m. on Nov. 3 at the library, which is located at 472 Route 301. Admission is “pay what you can” for adults ($25 suggested) and free for children. Reservations are requested by Oct. 30 at desmondfishlibrary.org.