Governor enacts another round of bills passed by state legislators

Gov. Andrew Cuomo has enacted 379 bills so far this year passed by the state Senate and Assembly, with another 45 waiting for his signature. None has been vetoed.

On Sept. 3, Cuomo signed a law that requires legal residents of other states who reside in New York (such as those who own vacation homes here) to waive the confidentiality of their mental-health records from their home states when they apply for a county-issued gun permit. Before the law passed, police had no way to obtain the records when doing a background check. The law takes effect on Dec. 2.

That same day, Cuomo enacted a law allowing local police officers to access handgun licenses and applications even if the gun owner opted out of public disclosure. Officers could obtain this information from the state police, but only between the hours of 9 a.m. and 5 p.m., and they could only make one request at a time, according to the bill’s sponsors. This created a challenge when responding to late-night domestic violence calls because officers could not determine if a gun was likely on the premises, the bill stated. A statewide database, yet to be established, will allow officers to check gun records instantly before arriving at the scene.

New York’s criminal code states that a person cannot be prosecuted by the state if he or she has been prosecuted by another state or the federal government for the same crime, with some exceptions. On Oct. 16, amid concerns that President Donald Trump would pardon those in his administration convicted of crimes, Cuomo added another exception. He signed a law that allows New York to prosecute individuals who have been pardoned by the president for federal crimes. The reasoning is that such prosecutions wouldn’t create “double jeopardy” — being tried for the same crime twice — because the president would have nullified the federal prosecution when granting clemency.

As of Sept. 12, day care centers are required to follow guidelines already in place at school districts when they respond to severe food allergies. The law is named for Elijah Silvera, a 3-year-old who died in New York City in 2017 after being given a grilled-cheese sandwich despite having a known dairy allergy. According to lawmakers, after Elijah went into anaphylaxis, the day care did not tell his mother what he had eaten and did not call 911.

On Sept. 26, Cuomo signed a law that allows voters to more quickly change their party affiliations. Under the previous law, if a voter asked to change parties, enroll in a party or leave a party, the request took effect on the first Tuesday after the general election. The new deadline is Feb. 14, which allows voters to take part in their new party’s presidential primary in April and congressional and state primaries in June. If a voter misses the deadline, the change is made seven days after the June primary. Jacobson, who is chair of the Subcommittee on Election Day Operations, was the bill’s primary sponsor in the Assembly.

On Oct. 7, Cuomo signed legislation prohibiting ambulance and first-response providers from disclosing or selling patient information to third parties for marketing purposes, including to pharmaceutical companies, insurers or nursing homes. It takes effect on April 4. The law provides an exemption for nonprofit ambulance companies and life-support first responders who use patient addresses for their own fundraising.

Arrest and prosecution records involving infractions and violations — aka petty crimes — are typically sealed by courts so they do not appear on a person’s record. But, according to lawmakers, some local police departments don’t seal records if a person was arrested on a more serious charge (i.e., a misdemeanor) that was reduced in court. On Oct. 7, Cuomo signed a law that requires that legal records be sealed based on the disposition of the case, not the initial charge. It takes effect on Jan. 5. 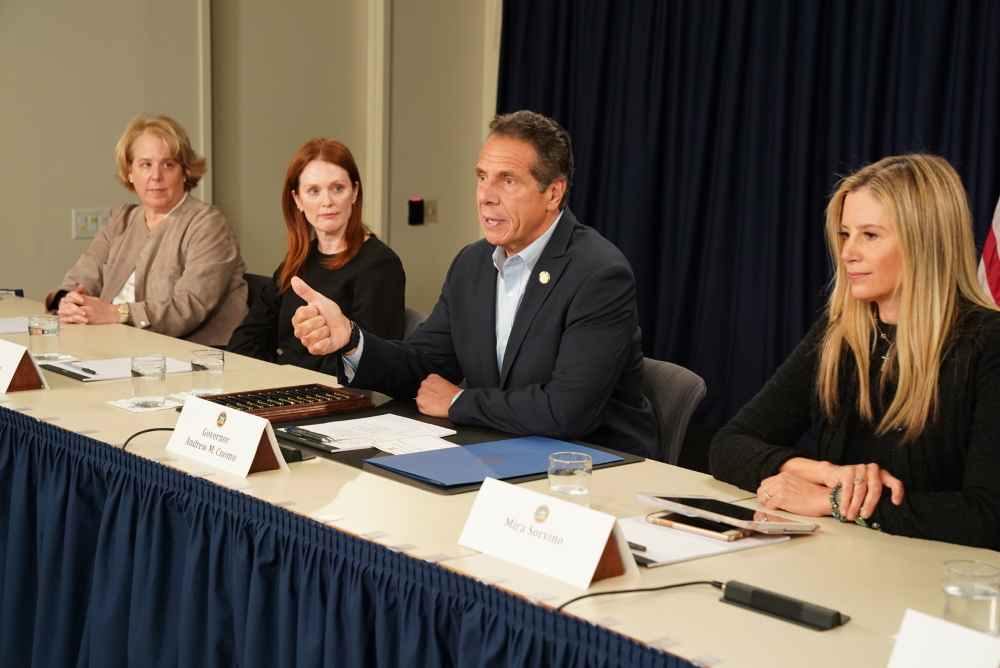 Gov. Cuomo enacted a law on Sept. 18 extending the statute of limitations for rape. He is shown with Robbie Kaplan of Time’s Up and actors Julianne Moore and Mira Sorvino. (Governor’s Office)

On Oct. 23, Cuomo signed legislation restricting nonprofits, including churches, from endorsing candidates for elected office or donating to their campaigns. Tax-exempt organizations are already restricted from participating in political campaigns under a 1954 amendment to IRS regulations. President Trump has vowed to repeal the amendment, and in 2018 the New York attorney general filed a complaint alleging his nonprofit Donald J. Trump Foundation had illegally provided donations to political candidates. Cuomo said that the new law will prohibit nonprofits in New York from engaging in political activity even if the federal amendment is repealed.

Some teaching hospitals allow medical students to practice pelvic exams on immobile patients immediately after gynecological surgery. On Oct. 7, Cuomo signed legislation that made New York the ninth state to ban pelvic exams on anesthetized or unconscious patients without their prior consent. Lawmakers cited a study that found nearly 100 percent of patients said they would provide consent for student exams if asked. The law takes effect on April 4.

On Oct. 18, Cuomo enacted a law that requires pharmacies to make “reasonable attempts” to contact customers by phone or mail if the U.S. Food and Drug Administration issues a Class I recall, which involves “a dangerous or defective product that could cause serious health problems or death.”

On Sept. 5, Cuomo signed legislation that prohibits companies from charging early-termination fees on auto leases if a customer dies before the end of the contract. Similar laws are already in place for phone, television, internet, energy and water delivery services. The law applies to auto leases created, renewed or modified after Dec. 3.

On Oct. 21, Cuomo signed a law allowing women to postpone jury duty for up to two years if they are breastfeeding.

On Sept. 9, Cuomo established September 11th Remembrance Day and mandated that public schools observe a moment of silence each year.

One thought on “How They Voted”