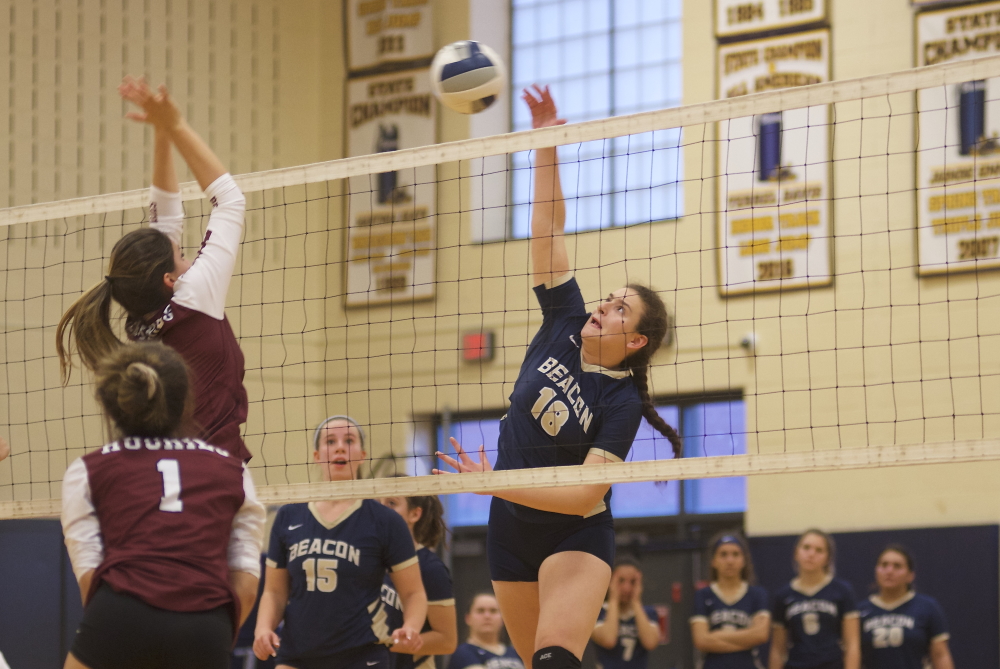 In a grueling qualifier on Wednesday (Oct. 23) that decided which team advanced to the first round of the Section 1, Class A playoffs, the Beacon squad needed five sets to defeat No. 18 Harrison (2-16), 3-2. 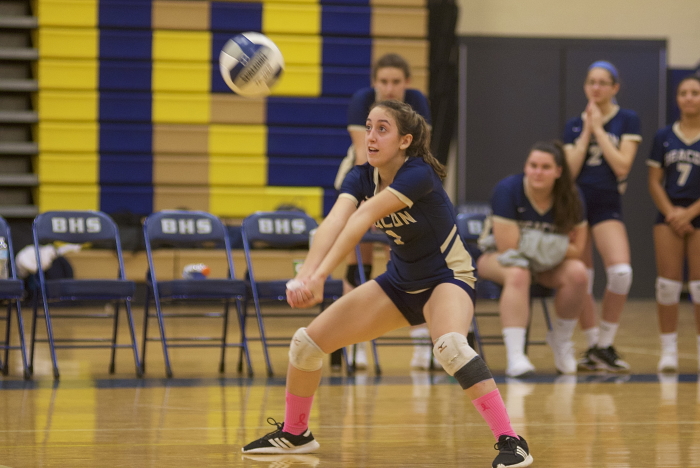 Olivia Spiak digs out a ball against Harrison. (Photo by S. Pearlman)

Next came a true challenge for the Bulldogs: On Oct. 25, they faced undefeated second-seed Hendrick Hudson on Oct. 25, who eliminated Beacon, 3-0. The squad finished the year at 7-18.

Meanwhile, top-seeded Haldane (15-2) has an easier road: The Blue Devils will play in the Section 1, Class D title game on Nov. 3 at Pace University against Keio or Tuckahoe, who face off on Oct. 31.

Beacon took a 33-6 thumping last weekend in a Class A playoff qualifier versus undefeated John Jay of Cross River, which is ranked sixth in the state by the New York State Sportswriters Association. The Bulldogs (2-6) closed their season on Oct. 24 with a 28-20 loss to Pelham in a non-playoff game.

Haldane (2-4) is scheduled to host Blind Brook on Saturday, Oct. 26, at 3 p.m., and visit Edgemont on Nov. 1 at 7 p.m. The Blue Devils will face Tuckahoe — their perennial rival — for the Class D sectional title on Nov. 8 at Mahopac High School. The Tigers (5-1) defeated Haldane earlier this season, 40-16, and are ranked 10th in the state by the sportswriters’ association.

After losing its final game of the season to Arlington B, 3-2, Beacon (4-12) just missed the playoffs, ranking No. 22 in a qualifying field of 20 teams. “We had so many injuries this season, we had a different lineup in almost every game,” said Coach Hugo Alzate. “I feel bad for our seniors — they were hoping for an out-bracket [qualifying] game.” He noted that the younger players picked up a lot of experience this year, and that “things look promising for next season.”

Haldane wrapped up its season on Oct. 19 with a 2-0 win over Peekskill on goals by Essie Florke and Jade Villella, closing the season at 8-5-3. The Blue Devils will host Hamilton in a Section 1, Class C playoff game on Oct. 31 at 3 p.m. 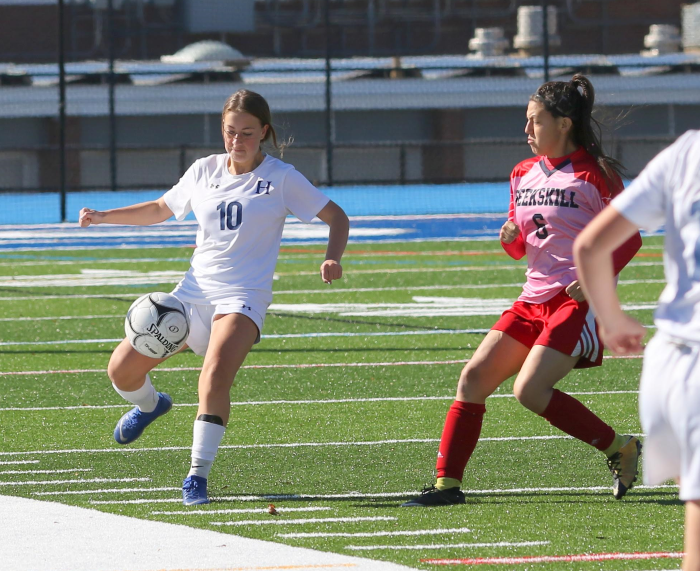 Haldane picked up its second win on Oct. 18, defeating Putnam Valley, 1-0. The Blue Devils closed the season on Oct. 19 with a 2-1 loss to Yonkers Montessori to finish 2-12-1. Haldane is scheduled to play at Hamilton (12-4) on Oct. 30 in the first round of the Section 1, Class C tournament.

At the Section 1 Coaches Invitational on Oct. 19 in Poughkeepsie, with runners from 74 schools competing, sophomore Ava Muscat of Beacon finished 72nd in 29:24 and sophomore Kayla Lare was 74th in 29:39.70 for the girls and junior Zachary Cader ran a personal best 17:23.7 to finish 10th and sophomore Salvatore Migliore was 61st in 18:48.2 for the boys. On Oct. 7, the boys edged Lourdes by nine points to win their second straight league championship.

The Haldane team will travel to Pawling on Saturday, Oct. 26, for the Northern County championships and to Poughkeepsie on Nov. 9 for the Section 1, Class D race.

Haldane finished its season at 10-6, its 10th straight year with a winning record, said Coach Simon Dudar. At the conference tournament, doubles team Caroline Nelson and Mairead O’Hara (who finished 15-1) received the No. 5 seed, while Anna Brief and Julie Geller went into the unseeded pool of 12.

Dudar said the team graduates five seniors and he said he expects four or five starters next season will be among the current freshman class.