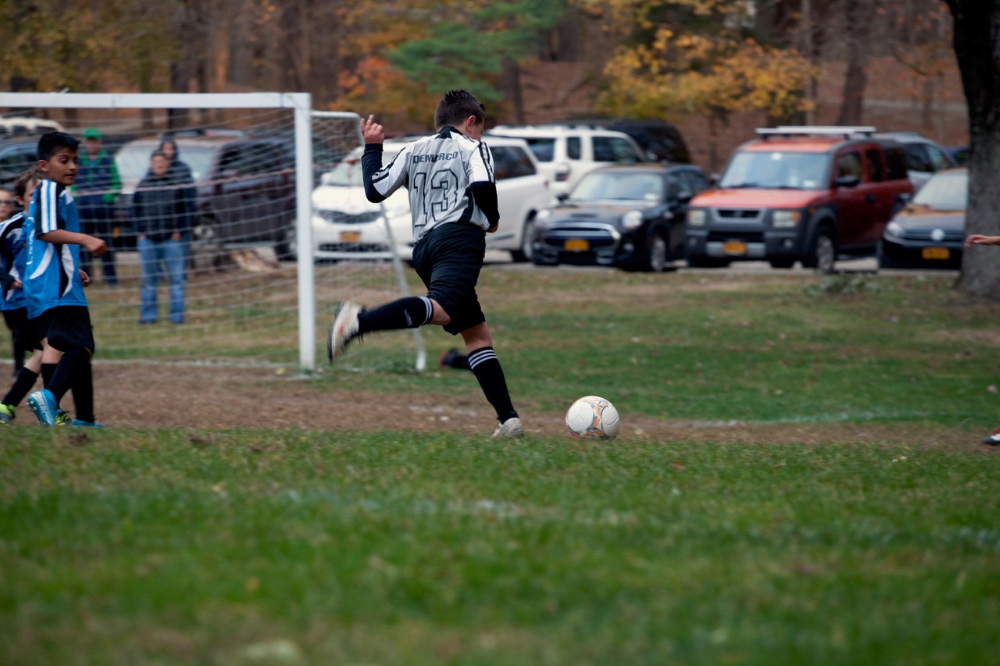 Erick Lazo, Griffin Lucca and Lachlan Koch of the Diamonds prepare for a blast from the Vikings’ Joey DeMarco (13). (Photo by Sheila Williams)

The Philipstown Soccer Club played a full slate of games last weekend, including a Friday night showdown between the club’s two boys’ U11 teams, the Vikings and the Diamonds. The Vikings pulled out a victory over their hometown rivals, and then, on Sunday (Oct. 20), mounted a dramatic comeback to force a 3-3 tie against the undefeated Cortlandt Eagles at Sprout Brook Park.

In other action on Sunday, the boys’ U12 Force avenged their lone loss of the season by trouncing the Cortlandt Nationals, 6-1, bringing their record to 5-1. Meanwhile, on a rain-soaked field in Carmel, breakaway goals from Dean Moyer and Tyler Powers led a second-half comeback for the boys’ U9 Fusion that fell short despite heroics from keeper Hudson Schacht.

The boys’ U9 Wildcats of the Beacon Soccer Club fell to the Yorktown Galaxy, 4-1. Noah Sampliner scored the Wildcats’ lone goal on a beautiful play that began with defender Angelo Martino and ended with a pass from midfielder Evan Todd. The Wildcats face the Wappingers Raptors on Sunday, Oct. 27.

The undefeated girls’ U11 Fire blanked the New Paltz Flash, 6-0. Drew Kelly scored twice, Claire Morgan had a goal and two assists and Fabiola Vogrincic recorded her first goal of the season. Avery Truet had an assist from midfield, as well. The back line of Julie Whittemore, Lily Mack, Sarah Ramkalawon and Victoria Mckay did not give up a shot attempt, and keepers Hayden Wilson and Victoria Maruggi recorded the shutout. The Fire face Orange County on Sunday.