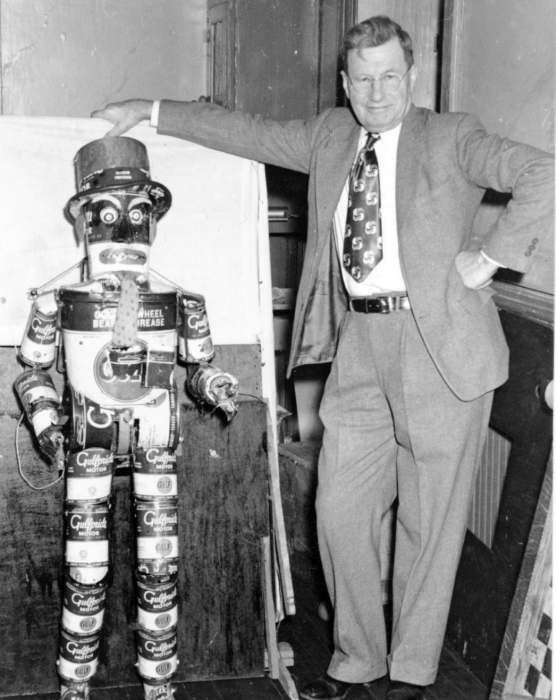 Dave Mohurter and one of his Tin Men (BHS)

A Masquerade March down Main Street on Halloween night, held between 1935 and the 1960s, sometimes drew as many as 1,500 costumed revelers. A highlight in the 1950s was the Tin Can Symphony, with “robots” made with tin cans clinking and clanking along, arms and legs swinging in unison.

The tin men were the whimsical creations of Dave Mohurter, who made them with empty Gulf motor oil cans. His 130 tin men, women and animals entertained generations of parade-goers.

Another memory from that era was the window-painting contest organized in 1951 by Frances Schipbanker, the art teacher at Beacon High School, and the Lions Club. Students from the junior high and the South Avenue and Spring Street schools were invited to compose works on retailers’ windows with removable craft paint. The Lions Club signed up merchants, provided materials and arranged for prizes. 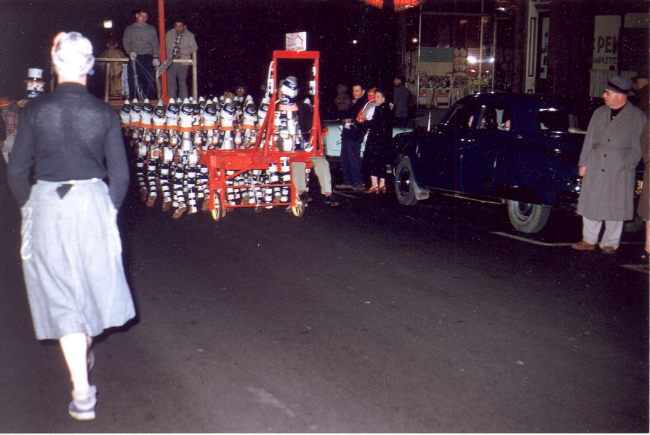 The adults may have had a selfish motive in backing this idea. The thinking was, if the children were busy decorating windows, they will be less likely to use soap and eggs on the glass or take part in other mischief.

Phillip Baxter, 12, and William Clark, 14, won first prize for their witch riding a broomstick silhouetted against a harvest moon painted on Shield’s Bakery at 317 Main. Second place went to John Roberts for a genie emerging from a bottle on the window at Dee-Dee Toyland.

A sign above the entry to the garden at University Settlement Camp near the foot of Mount Beacon once read: “One’s Self Must Garden and Gardener Be.”

The man who made that sign knew something about the avocation. His name was Charles Stover and he was the commissioner of parks for Manhattan from 1910 to 1914 and the man most responsible for the design and layout of the camp. 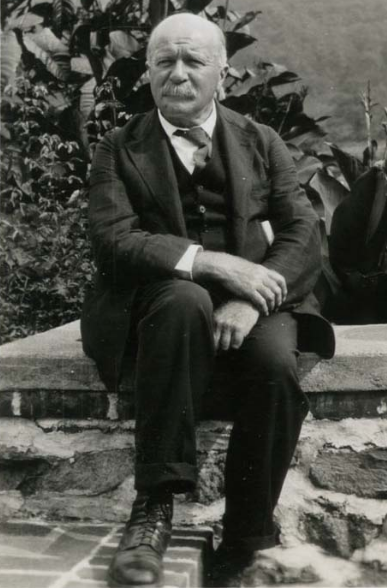 Each summer the camp served nearly 1,000 children, most of them underprivileged residents of the Lower East Side of Manhattan. Stover proved the perfect steward. He believed that outdoor activity was a key to a child’s well-being, and the camp suited him perfectly. He lived there in Mountain Rest, which had been a summer residence of abolitionist preacher Henry Ward Beecher.

Stover left his mark everywhere on the 51 acres of the camp, serving as a mason, gardener and landscape architect. He planted trees, walked the grounds with a “divining twig” to find a water source for the Olympic-sized pool, and made an everlasting impression on the children. After his death in 1929, the place was known as Camp Stover in his honor.

Imagine the stirrings among the Irish-American community as it prepared for Mass on Sunday, Aug. 18, 1861, when “Dagger John” Hughes, the archbishop of New York, would officiate at the dedication of the St. Joachim’s Church in Matteawan. 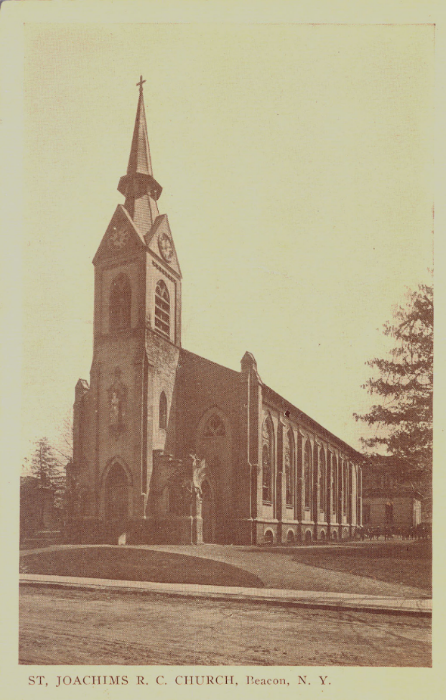 By that time, Dagger John (nicknamed for the dagger-like cross he put before his signed name and for his battling temperament on behalf of his Irish kinsmen) was a national figure revered for his moral stands against slavery and against the pervasive nativist sentiment toward immigrants.

The Irish at the time were considered a criminal class of alcoholics and moral degenerates overrunning the country after the potato famines drove them to the U.S. The new Roman Catholic church would be an edifice of hope and pride for these immigrants and others who followed, built with contributions from the small wages of laborers and house servants.

In its Aug. 31 issue, the Catholic weekly newspaper, The New York Tablet, reported:

“The Matteawan parish has not 100 families; it has no rich patrons. Its members are almost exclusively Irish, and when the fact that their establishment is now worth over $1,600 is viewed impartially, it proclaims the value of what is sometimes appropriately said of the ‘Celtic Mission’ in the designs of Providence over this religious people.”

Marion Conway MacDonald, who died in 1992 at age 88, was a Beacon Historical Society member who knew how to keep Christmas well. She said it was always the best holiday: her family home on North Avenue would be filled with decorations and ornaments saved from Christmases long ago. Her favorite Christmas toy was an antique windup tin Santa from the 1870s, which would be brought out and let loose across the piano top for special company. 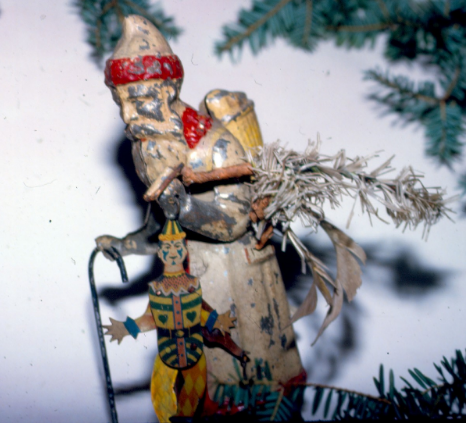 In the 1980s Marion began a correspondence with Robert Brenner of Wisconsin, an expert on Christmas traditions. Her reminiscences struck a chord and he asked her to contribute to his 1985 book, Christmas Past. She wrote:

“It was the custom at our house never to decorate the tree before Santa came. This applied to me and my little brother when we were young. The tree was put up Christmas Eve and left for Santa to trim. In the morning it was all dressed up with candles (never lit), canes, popcorn and some lovely old ornaments and tinsel.

“As I grew older and understood all about Santa and who he was, I trimmed the tree. Sometimes I trimmed it by myself and sometimes the boy who lived next door to me, George, came over and helped. We had great fun and Mama would make hot cocoa and give us some Christmas cookies.

“When we were small, we always put our stockings at the foot of our bed. My mother must have been exhausted with the routine — making sure I was fast asleep while she stuffed the stockings. An orange always went in first and then nice little tiny presents which usually consisted of some beads, jewelry, or a pretty pair of mittens. We always had a lovely wreath on the front door usually made of real holly or laurel. In the windows there were poinsettias. 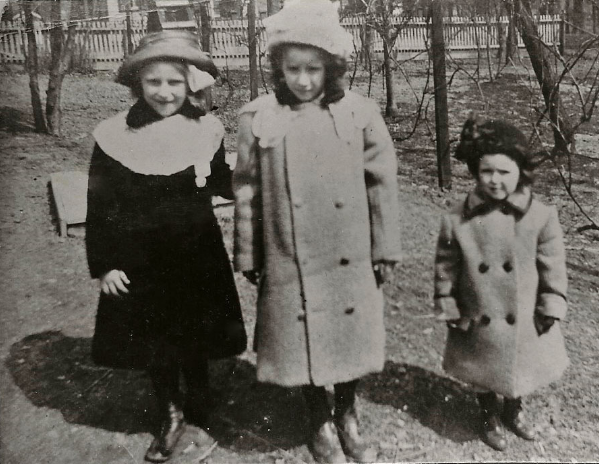 Marion Conway with her friends, the Grady sisters, in 1911 (Photo courtesy Ian MacDonald)

“Early in the morning on Christmas Eve, our kitchen became alive with the aroma of all the goodies that Mama was preparing, especially the homemade raisin bread. My grandfather’s sister, Aunt Anne, came over early to help Mama. She was a marvelous cook. She would roll up her sleeves and start stuffing the bird.

“In those early days before supermarkets, the local butchers stocked roasting chickens, ducks, geese and, on order, a suckling pig. A turkey had to be ordered in advance. That was the way small towns operated. Aunt Anne made cookies and pies and could do almost anything in the kitchen. Mama loved her and my mother was her favorite niece.” 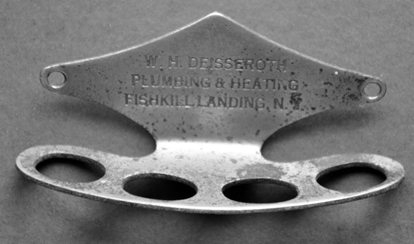 What is the object at right? Purchased at a yard sale by Beacon Historical Society member Theresa Kraft, it is metal, with two drilled holes for a wall mount. It is 3½ inches long, with the words “W.H. Deisseroth, Plumbing & Heating, Fishkill Landing, N.Y.” engraved on the plate. Most likely it was handed out as promotional advertising for this plumbing concern.

William H. Deisseroth had a shop at 3 North Ave., just off Main Street, in Fishkill Landing. He opened for business in 1910, when this object was probably made, likely by the Art Brass Co. of New York City, which was known for manufacturing similar pieces for the plumbing trade.

Deisseroth was not only a plumber but a tenor. The “singing plumber” performed with many choral societies and as a soloist all over the Hudson Valley while still keeping his day job.

Give up? It is a toothbrush holder!